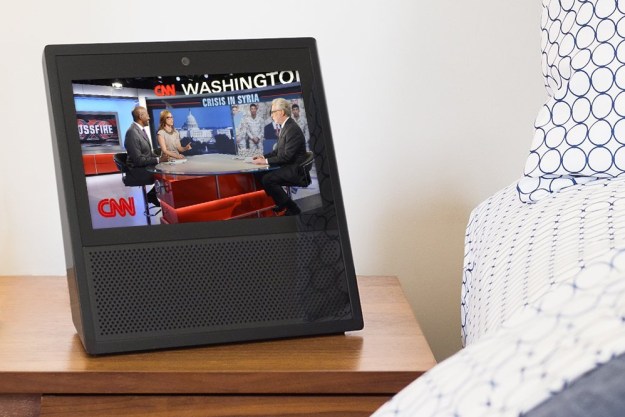 “Alexa with a screen, the Amazon Echo Show puts more of your senses to use when you use the voice assistant.”

Does Alexa really need a screen? We put our Amazon Echo Show review unit through its paces to find out.

We’ve wondered in the past if voice control is the future of smart-home control. The answer seemed to be “Yes, but…” We don’t necessarily need our Amazon Echo or Google Home devices to show us a picture of the light we’re turning off, but as things become ever more complex in our increasingly autonomous homes, screens will have a role — as might gesture control, proximity sensors, and so on.

The Amazon Echo Show is a digital assistant with a 7-inch touchscreen that can show you movie trailers, calendar, news alerts, Yelp ratings, and pictures of cats (if you ask the right way). We got our hands (and eyeballs) on the Show to see if the screen opens up a whole new dimension to the voice assistant.

The Amazon Echo Show looks a bit like something you might find in a business conference room. It’s a squat little box dominated by a big screen and speakers. From head on, it might look like a tablet, but from the side, you can see its rounded triangular bottom jutting out. It does look quite a bit boxier than its main competitor, the Lenovo Smart Display, which is a smart speaker featuring the Google Assistant voice. It also features a much smaller screen than the Echo Show 2.0 released in September 2018, which features a 10-inch display. The 2.5-pound Show has a 5-megapixel camera, dual 2-inch stereo speakers, an Intel Atom x5-Z8350 processor, and dual-band Wi-Fi support for 2.4 and 5GHz Wi-Fi connectivity.

Setup is pretty quick, especially if you already have another Alexa device. When you plug it in, Alexa says hello and tells you it’s ready for setup. On the device, you connect to your Wi-Fi network, using the on-screen keyboard to type in your password. Then you’ll have to key in the email address and password for your Amazon account. You’ll confirm your time zone, watch an intro video, and then be greeted with the home screen. There might a picture of a leaf close up or some other desktop wallpaper in the background. Up in the left-hand corner, you’ll see the local time and temperature. It will also constantly show you news headlines or suggestions for what you can ask. Whenever you want to get back to the screen, you just say, “Alexa, go home.”

At the bottom of the screen, there’s a light bar that turns blue when Alexa is listening, and glows red when the microphone and camera are offline. You can turn these off with a button at the top of the screen. There are also volume buttons on the top. We’re waiting for more personalization options for the display, like the ability to always display your calendar instead of headlines, or being able to change the font and so forth. Like the Lenovo, you can personalize with personal photos that you can upload via the Alexa app.

When you download and open the app, you should be able to see your Amazon Echo Show by tapping the menu button in the top-left corner, selecting settings, and clicking on the device. Here you’ll be able to turn on and off Do Not Disturb mode, as well as schedule times you want this mode enabled. You’ll also put in your address so you get personalized results for restaurants and your commute, and you can change your Wake Word (if your name is Alexa or you want to call your Show “Computer”), and make the screen’s background a personalized picture.

If you have smart-home devices that work with Alexa, you’ll also need the app. Though you can ask Alexa to “discover devices,” you’ll still have to enable the corresponding skill and input your account information. Giving it an edge over voice assistants without screens, the Show can also display feeds from a bunch of smart-home cameras and video doorbells, like Nest, Arlo, Ring, and August.

The Alexa app is also where you’ll set preferences for things like your news briefing — if you’d rather hear from NPR than ESPN, for example — and music services.

Show me the Money for Nothing lyrics

In some ways, the Echo Show’s screen grants you freedom while still acting as a tether. You can be across the room from your Dot and ask it to play some music. The same is obviously true for the Echo Show, but there are some times when you’ll need to be looking at the screen to get the full effect. Take movie times. We asked what was playing this weekend, and Alexa showed a scrollable list of more than 30 movies. She read a couple titles aloud and stopped. Below the list was a written suggestion: “Try ‘Alexa, next.’” When we obeyed, the list shifted to the next few movies, but Alexa didn’t read them aloud. Another time we checked for movies, the suggestion was “Try ‘Alexa, number one.’” The screen changed to show a description of the movie and its IMDb rating, all of which Alexa recited. If you were across the room and paying attention, you might remember Rough Night was number four in the list, so Alexa could still tell you about it, even if you couldn’t see the list.

If you’d rather not leave the house, you can watch Prime movies on the Show’s screen too. It’s maybe not the ideal movie-watching experience, but it’s a nice choice if you don’t have a TV in your kitchen. We watched the latest Game of Thrones trailer  on the Show, and it got the job done. We saw dragons. You can also ask Alexa to fast forward through a video.

If you have Amazon Music, Prime Music, Spotify, Pandora, iHeartRadio, or TuneIn, you can listen to music on the Show, too. Some songs will even let you sing along with the lyrics. Drake’s Hotline Bling, our go-to karaoke song Blister in the Sun, and Madonna’s Spanish lullaby (La Isla Bonita) all showed us we’ve occasionally been singing the wrong words. Jawbreaker’s Want played sans lyrics. We still had to be careful about phrasing here. “Play Jawbreaker Want” didn’t work. “Play the song Want by Jawbreaker” did, though.

While YouTube used to be available on the Show, it was shut down due to an ongoing feud between Amazon and Google. But you can still watch videos from other places. The Food Network has partnered with Amazon to show cooking videos, so the skill is your go-to when you need to learn how to cut an eggplant.

Even after experimenting with it, we’re not 100 percent sure how the headline skill works. Alexa will scroll through these stories, and you’ll get a picture of Nancy Pelosi or whomever it’s about in the background. If you want more information, you have to say, “Tell me about Shania Twain.” Saying “What’s the news about Shania Twain” gives your flash briefing instead. We knew there was news about James Comey, but saying, “Alexa, tell me about James Comey” gave us his Wikipedia info instead. Meanwhile, asking “Alexa, tell me about Dracula,” we learned about an upcoming TV show from the Sherlock creators instead of more general info.

In addition to seeing a fuller picture of the weather forecast and your calendar events in big, bold font, there are a few other advantages to the Show’s screen. You can see your reminders and lists, which is much handier than going into the Alexa app. Our favorite is the timer, though. It’s something we use constantly in the kitchen. While it’s not difficult to ask for how much time is left, glancing at the Show gives the answer.

Of course, you can also use the Show to call contacts who also have the device. You’ll have to set this up through the app, and you’ll be able to see which of your friends sprung for one. From the Show, you can ask it to make the call. We tried out the feature with an employee at Amazon. After telling us we didn’t have a contact named Denny (few do), we were finally connected after a couple tries. It works pretty similarly to Skype or Facetime, so whomever you’re calling will have to answer. The call quality seemed on par with these services. You’ll also be able to make voice calls to people you know who have an Echo or Dot.

Your family member can call in whenever they want, and you don’t get the choice to decline.

The Drop In feature is a bit different. It’s the technology equivalent of the pop-in. Your family member — it’s something you’ll only want to enable for people you know well — can call in whenever they want, and you don’t get the choice to decline. You’ll get a few seconds to compose yourself if someone drops in, as their screen will glaze over while you get an alert. It makes more like a video intercom.

That feature brings us to some privacy issues. Like the Echo, Dot, you can mute the Show, as well as electronically block the camera. There isn’t a physical shutter, though, unlike the Nucleus intercom. The intercom also has Alexa built in, but it lacks some of the features of the Show. For one thing, Amazon devices have an ESP feature that ensures only the closest Dot or Show will answer if you say Alexa. It works really well, even when your devices are in adjacent rooms with no walls separating them. The Nucleus lacks this feature, and we had trouble getting it to respond to the wake word, especially if it was playing music or news briefings.

The Amazon Echo Show has a one-year warranty.

Right now, the Echo Show’s on-screen features aren’t show-stoppers. We can see a lot of potential, though.

The Lenovo Smart Display is the Show’s strongest competitor, and for now, the better choice. It’s a Google Assistant smart speaker that has a bright, crystal clear screen. It’s available in either eight inches ($200) or 10 inches ($250), and makes the Show look very antiquated. Other third-party companies are launching smart displays featuring Google Assistant later this year, including JBL and LG. We’ll be sure to update you when we get a chance to test these devices out. If you’re married to an Alexa device with a screen, Amazon recently launched the Show Mode Charging Dock, which essentially turns your Kindle Fire into an Echo Show. You should also check out the Echo Show 2.0, recently released by Amazon and available in October for the same $230 price. It has a bigger screen and a crystal clear LED display.

Amazon Alexa is here to stay, folks. While this older model is probably discounted right now, you might be wise to check out the 2.0 version.

If you’re married to Alexa and are in need of a screen, then yes. If you’ve been thinking of grabbing an Echo for a while, you could invest in something that adds video calling and visual search results.

Updated September 25, 2018 to add info about the Lenovo Smart Display, the Show Mode Docking Station, and the recently-announced Echo Show 2.0.