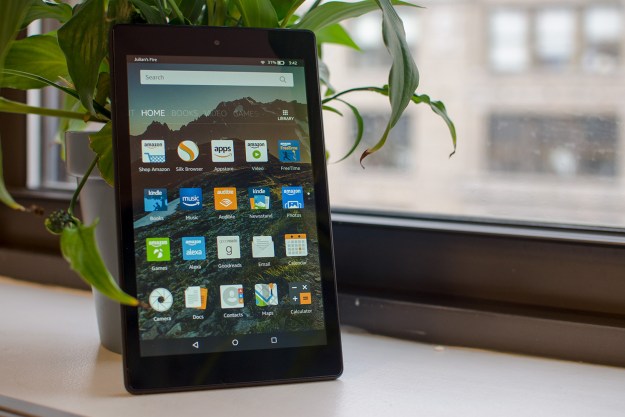 Amazon’s Fire tablets aren’t as trendy or powerful as Apple’s popular iPads, but they’re far more affordable. For 2017, the online retail giant has updated its Fire HD lineup with a refreshed Fire HD 8, Fire 7, and Fire 7 Kids Edition, along with a new Fire HD 8 Kids Edition.

Price is a crucial factor for these tablets because it’s low. Amazon has the most affordable tablets on the market. The 7-inch starts at just $50, and the HD 8, which we reviewed here, starts at just $80. Yep, for less than $100 you get all of Amazon’s services, access to Alexa, the voice assistant that can control your smart home, as well as a functional tablet that can perform most smartphone tasks adequately well.

The Fire HD 8’s 1,280 x 800-pixel resolution screen isn’t eye-catching, but it’s just bright enough to be visible outside on a sunny day. It offers decent viewing angles, and the colors aren’t over-saturated.

But it’s far from sharp. Pixels are easily visible, text isn’t as sharp as we’d like, and overall it’s not a good tablet for video consumption. It’s strange, considering Amazon has a whole section promoting its Prime Video service. Upgrading the screen to a 1,080-pixel resolution would greatly help, but understandably it would also jack up the price of the tablet. There’s a high chance that your phone offers a higher, more crisp, resolution, so you may want to stick with it for videos.

Amazon’s blue-light filter, Blue Shade, is a handy option to make it easier to fall asleep at night. It removes blue light from the display, which is said to disrupt sleep.

This display does the job, for the most part.

The Fire HD 8’s design is fairly straightforward. The front offers a lot of unused space around the display (on all four sides), and you’ll find a front-facing camera at the top. The back and the frame are made of plastic, and it feels slippery. The Amazon logo sits in the center — it easily attracts dust and dirt — and on the top left you’ll find the rear camera.

The display seems to attract fingerprints, so make sure you carry around a microfiber cloth if that sort of thing bothers you.

We like the 8-inch size of the tablet, but it’s a little harder to hold in one hand than the 7-inch Fire. The display seems to attract fingerprints, so make sure you carry around a microfiber cloth if that sort of thing bothers you.

All the buttons are situated on the top edge of the tablet — the power button is on the right, and the volume rocker is on the left. The headphone jack sits between the two, next to the Micro USB port, which is how you charge the Fire HD 8. Unsurprisingly, Amazon hasn’t updated its tablet to the reversible USB Type-C charging port standard that the fanciest Android smartphones and tablets now use.

Thankfully, the Fire HD 8 doesn’t feel fragile. The build quality seems solid, even if the plastic on the back feels a little cheap, and the buttons offer nice, clicky feedback.

The black color option is a little boring in our opinion, so we recommend opting for the red, blue, or yellow variants.

The Fire HD 8 doesn’t have a lot of internal improvements over the 2016 model, but it does have dual-band Wi-Fi support — you’ll be able to connect to 2.5GHz and 5GHz Wi-Fi bands, and it allows for faster internet download speeds. 5GHz lines are often more stable, and if you don’t have one at home, consider upgrading your router.

It’s powered by the MediaTek MT8163V system-on-a-chip, which has a quad-core processor with 1.5GB of RAM. It offers decent performance for the price, and it’s the same found on the 2016 Fire HD 8.

The Fire’s interface is speedy and smooth, but we noticed stutters when scrolling through the Facebook app. Games like Crossy Road performed well, though again with the occasional stutter or lag. Don’t expect to easily play graphically-intense games, or to use this tablet as a productivity tablet. It’s best for browsing the web, playing light games, reading, and listening to music. This is probably why it’s a popular tablet for kids and teenagers.

Amazon offers 16GB or 32GB storage options, but thankfully there’s also support for a MicroSD card — you can expand your storage space to 256GB if needed. The only reason you’ll need this is if you download a lot of offline Amazon content.

The battery is supposed to be an improvement in the 2017 model. Amazon says it should last up to 12 hours on a single charge, which is 2-3 hours more than your standard tablet. We used the Fire HD 8 for five hours and saw its battery drop from 100 percent to 60 percent, which is on target and pretty impressive. What’s better is the battery life on standby — we left the Fire HD 8 on for four days and only saw the battery life drop from 100 percent to 70 percent.

There are also cameras on both sides of the tablet, but they’re really only there if you’re in a bind. The front offers a sub 1-megapixel sensor, so it can do basic video chats, and the rear camera is packed with 5 megapixels. The image quality is dreadful — stick to using your smartphone, which will undoubtedly have a better camera. But again, having a camera is better than none at all.

The stereo speakers are located on the edge of the left side — when in landscape mode, they end up as bottom-firing speakers. They get surprisingly loud, likely thanks to Dolby Atmos technology, and they sound nice.

Overall, despite some stutters and lag, performance is largely unmatched against tablets at this price range.

Our favorite use of the tablet is reading books, news articles, and browsing the web. It’s a great size, making it easy to carry around, and reading feels like you’re holding a book or a folded newspaper.

But Amazon’s Fire OS, which is based on Android, is currently on version 5.4. More specifically, it’s based on Android 5.1.1 Lollipop, an operating system version from 2015. Needless to say, it’s a little outdated. Amazon representatives told us that the company does regularly provide software updates for the Fire tablets, which include “new features, performance enhancements, security patches, and other updates.”

It’s a great size, making it easy to carry around, and reading feels like you’re holding a book or a folded newspaper.

Fire OS is different from regular Android phones or tablets. This doesn’t look like a Google Pixel or Samsung Galaxy tablet. The notification drawer and navigation buttons work the same as any normal phone or tablet, but the home screen shows all the apps you have installed in a vertical list. Swipe right and you can see recently-used apps (or just press the Recents button); and swiping left takes you to various “pages.” These include Books, Video, Games, Shop, Apps, Music, Audible, and Newsstand. Within these pages, you can buy and access all your multimedia Amazon content — you’ll need a Prime subscription to truly take advantage of everything it has to offer.

There’s no Google Play Store, which means there are a lot of apps that aren’t accessible. Most of Google’s apps, for example, are simply wrappers of the web version — some, like Google Maps, aren’t even on Amazon’s Appstore. Dropbox, for example, is another app that’s not available. That’s not to say there isn’t a wide variety of apps to choose from — just don’t expect everything to be there. You can browse Amazon’s app selection online, if you’re curious.

Alexa is available on the Fire HD 8, now for U.K. users as well. You can use it to control smart home devices, ask it questions like, “What’s the weather,” ask the voice assistant to launch apps, and more. It responds quickly and works pretty well. If you’re buying a Fire tablet as a cheap way to access Alexa, know that you’ll have to always have the tablet in your hand if you want to launch a voice command. It requires some button pressing, unlike the Amazon Echo.

The Fire HD 8 is covered by a limited 90-day warranty in the U.S. and Japan that protects your device of manufacturing defects from the date of purchase. If you buy the tablet from Amazon or authorized sellers in any other country, you will get a 1-year limited warranty.

The new Fire HD 8 actually has a price cut from the last generation, from $90 to $80. The $80 Fire HD 8 comes with “special offers,” or advertisements. You can buy a model without these special offers, but it will cost $15 more. The Kids Edition is the exact same, but it offers educational content, a parental control service, and it comes in a rugged case for protection.

It’s available for purchase from Amazon.

Amazon’s Fire HD 8 is a fantastic tablet for the money, but just know what you’re buying it for: Amazon media and a few apps.

If you’re buying this for your little one, go with the $130 Kids Edition as the rugged protection alone is worth the extra money. We see zero reason to upgrade if you have a Fire tablet from 2016, but it’s worth the extra $30 to buy the Fire HD 8 over the refreshed Fire 7, if anything for the HD screen.

While most of the Fire HD 8’s features aren’t impressive if you compare them to a fancier tablet, it’s tough to find a polished tablet with solid performance at this price range.

For iOS users, not at this price. You’ll either have to shop for older iPads on Amazon, but they still don’t come close to the Fire HD 8’s price. We recommend the $330 9.7-inch iPad for iOS lovers who want a tablet, though it is undoubtedly pricier.

Most other Android tablets are still a little more expensive than the Fire HD 8, but if you have a little more money to spend, the Nvidia Shield K1 is a great value at $200. You can also look at Amazon’s own Fire tablet lineup for other options, such as the Fire HD 10, and the new Fire 7. We’d still choose the Fire HD 8 over those, though.

Amazon’s Fire HD 8 should last you two years or so, at the most. The company told us that it does push regular security and software updates, but considering Fire OS is still based on the 2015 Android 5.1.1 Lollipop, we’re not expecting a jump to Android 7.1.2 Nougat any time soon.

Yes. The Fire HD 8 is perfectly usable and it’s best feature is its price, which starts at $80. There’s hardly any competition at that price, and if you’re looking for an affordable tablet for media consumption, this is it.

Video-editing app LumaFusion to get a Galaxy Tab S8 launch
The best Samsung Galaxy Tab S8 keyboard cases
Best Apple deals and sales for September 2022
The iPhone 14 gets a stunning transparent back with this new mod
Google Pixel Tablet leak reveals key specs about the mysterious device
Everything (and we mean everything) to know about 5G on the iPhone
OnePlus 11 Pro leaked specs predict a zooming disappointment
How to turn off your iPhone 14 Pro’s always-on display
Does the iPhone 14 Pro have a battery life problem? It sure looks like it
Your guide to the best e-book readers for 2022
How to delete lock screen wallpapers in iOS 16
iPhone 14 Pro vs. iPhone 13 Pro camera battle isn’t as close as you think
The best gaming tablets for 2022