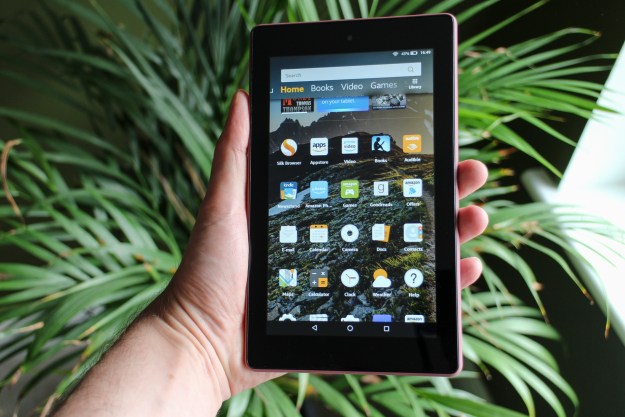 “Amazon's Fire 7 tablet is cheap, but riddled with compromises.”

Editor’s note: The Amazon Fire hasn’t changed since we last reviewed it in June 2019, but Amazon has announced an update of the Amazon Fire HD 10. It’s worth a look if you’d like a larger tablet.

Amazon set the budget tablet market alight when it released the original Fire 7 tablet for $50 in 2015. The surprisingly cheap tablet has been refreshed a few times since then, with minor hardware improvements, but Amazon has maintained that $50 price tag. I’ve been testing out the latest Amazon Fire 7 (2019), which features a faster processor and more storage this year, as well as the $100 Amazon Fire 7 Kids Edition.

While the Fire 7 has its weaknesses, not least the fact you’re locked into Amazon’s Appstore, the unbeatable value continues to attract bargain hunters. The question is: Are they moths to a flame or is it an unmissable hot deal?

The Amazon Fire 7 is a fairly chunky tablet finished in matte plastic, which curves into the 7-inch screen. All you’ll find on the back is Amazon’s A to Z arrow and the 2-megapixel camera lens at the top left.

There’s nothing on the bottom edge, but there’s a flap for the MicroSD card on the right and the mono speaker is on the left. Up top you’ll find the volume controls, 3.5mm headphone port, Micro USB port, and power button..

I found the Amazon Fire 7 was adequate for reading books and web browsing, but not so great for watching movies or gaming.

Build quality is good and it feels solid. The Amazon Fire 7 is the perfect size for portability. It’s comfortable to hold with one hand and easy to stow in a bag. I also like the new muted colors. My review unit is plum, but you can get it in sage or twilight blue, and classic black is still an option.

While the screen is fairly bright, it can be tough to read outdoors in direct sunlight. It’s also not the sharpest screen around. Both the Amazon Fire HD 8 and the 8-inch Walmart Onn have bigger screens that are also slightly sharper.

The Amazon Fire HD 8 also boasts dual stereo speakers with Dolby Atmos support and they really blow the mono speaker in the Fire 7 away.

I found the Amazon Fire 7 was adequate for reading books and web browsing, but not so great for watching movies or gaming. The screen quality and poor sound definitely let it down.

The big problem with Amazon’s Fire tablets is that they run a forked version of Android called Fire OS and they’re locked to Amazon’s Appstore. If you’re a Prime member, then this might suit you – it’s easy to read books and stream from Prime Video. You can also install major apps, like Netflix, but you won’t find every app and game that’s available in Google’s Play Store in Amazon’s Appstore, and the pace of updates is slower.

Amazon beefed up the processor in this year’s Amazon Fire 7, which is a good thing.

Probably the biggest omission is YouTube, but there are also a lot of Android games that you’ll only find in the Play Store. Though the feud between Google and Amazon is reportedly settled, and YouTube is set to return to Fire devices later this year, there’s no firm date on that.

Fire OS is perfectly usable, with a home page that features your recent content and then further pages that break it down into Books, Video, Apps, Games, and so on. One element that some people will find distasteful is the presence of “Special offers” or adverts on the lock screen. You can buy the tablet without them or remove them after purchase, but it will cost you an extra $15. Thankfully, the Kids Edition doesn’t come with ads.

A highlight of Amazon’s ecosystem is Alexa, and you can use the virtual assistant on your Fire 7 for hands-free operation right out of the box. You can ask Alexa to message people, open apps, or what the weather is like. For that last example you get an onscreen breakdown, just as you would with an Echo Show. It’s an enticing extra and genuinely handy if you’re used to employing Alexa.

You can even dip into the settings and toggle on Tablet ESP Behavior to ensure that only the closest device will answer when you call Alexa, which is great if you already have Echo devices in your home.

The Amazon Fire 7 Kids Edition is twice the price of the Amazon Fire 7, and, in terms of hardware, it’s identical to the regular one, so you may be wondering why you’d consider it. The idea is to offer a tablet that you can quickly configure out of the box and then let your little ones loose with. It comes with a special bumper case with a foldout stand and a 2-year worry-free guarantee that Amazon will replace it for free if your child manages to break it, as long as you return the broken tablet.

You also get 1 year of Amazon FreeTime Unlimited (usually $3 per month), which offers a huge range of curated content, including apps, games, books, videos, audio books, and more. All you have to do is set up a profile with your child’s age and you can be rest assured they’ll get a constantly refreshing well of content to draw from that’s free of anything unsuitable. The parental controls are also excellent, allowing you to set overall limits, bedtimes, and more.

Amazon beefed up the processor in this year’s Amazon Fire 7, which is a good thing. It’s listed as a 1.3GHz quad-core processor and it’s backed by just 1GB of RAM. But there’s no getting away from the fact that this tablet feels sluggish. Apps are slow to load, and games run at the lowest graphical quality and may occasionally stutter and drop frames.

I found the battery life to be mediocre at best.

I played Asphalt 8: Airborne and Alto’s Odyssey and they both ran, just not very smoothly. The lack of RAM is also a concern for multitasking. If you like to have a lot of apps and games open and switch between them frequently, then it’s going to be a problem.

Usually we run benchmarks to compare device performance, but they either aren’t available in the Amazon Appstore or crashed when I ran them on the Fire 7. I did run a small test with the Amazon Fire 7 side-by-side with the Walmart Onn (a $64 Android tablet) to see which would load Digital Trends in the web browser and start the game Asphalt 8 first. The Amazon Fire 7 was a second or two faster with both tasks. Once loaded, there was no difference between the two tablets in terms of how quickly you could skip in and out of apps and games.

The Amazon Fire HD 8 has the same processor, but the RAM is bumped up to 1.5GB. That makes it just a little more capable in the multitasking department, but I didn’t find any discernible discrepancy between the two in general use.

If you bought your phone within the last couple of years or you sometimes use an iPad, then the pace of the Fire 7 will be maddening, but if you’re switching from an older device it will likely be tolerable. It should also serve you just fine if you mainly intend to read, stream TV shows, and play the odd casual game.

The basic Amazon Fire 7 and the Kids Edition come with 16GB of storage and a MicroSD card slot for expansion. You can also get a 32GB Fire 7 model for an extra $20.

Amazon suggests you’ll get up to 7 hours of mixed use from your Fire 7 tablet, but there’s no battery capacity stated. I found the battery life to be mediocre at best.

Sadly, the Amazon Fire 7 relies on a Micro USB port for charging. This is a real problem for the Kids Edition, because young kids struggle to plug in Micro USB cables and the cable or port can be damaged quite easily. I recommend hunting out a cable with a magnetic Micro USB plug that’s designed to stay in the tablet if you’re buying for a young child.

You get a cable and charger in the box and it takes a lengthy 4 hours to fully charge the tablet from empty with the kit supplied.

While the Amazon Fire 7 only comes with a 90-day limited warranty, one of the best things about the Kids Edition is that it comes with a 2-year worry-free guarantee, so if your child manages to break it or it breaks down, you’ll get a free replacement no questions asked.

The Amazon Fire 7 makes a lot of sense if money is tight and you’re already a Prime member. It’s portable, well built, and packs in a lot for the money. Compromises are par for the course unless you can afford to spend more.

There’s nothing else out there at $50. The main competition comes from Amazon itself in the shape of the Fire HD 8 and Fire HD 8 Kids Edition, which are $30 more than their Fire 7 counterparts and worth the extra cash.

Apple’s iPads are the best tablets you can buy, but the 2018 iPad at $330 is the most affordable. If you want the portable iPad Mini (2019), you’ll need to save up $400 – enough to buy 8 Fire 7 tablets. Alternatively, it’s possible you’ll find a good deal on an older iPad, which will likely still outperform the Fire 7.

If you want a cheap Android tablet that offers full access to the Play Store out of the box, then the 8-inch Walmart Onn at $64 might catch your eye, but for a good Android tablet you’ll need to pay a fair bit more.

While the Amazon Fire 7 is fairly well built, I wouldn’t expect it to last beyond two years. There’s no water resistance, so you’ll need to keep it dry, and the Kids Edition is well protected by the bumper case it ships with.

Amazon also automatically rolls out software updates quite frequently and my review unit is running a build from May 28.

No. Save up the extra $30 and get a slightly bigger and better display, more RAM, longer battery life, and stereo speakers with the Fire HD 8.