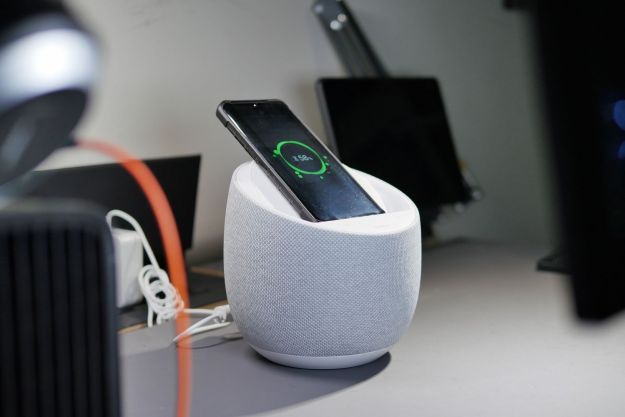 “You can play music on the Belkin SoundForm Elite Hi-Fi and charge your phone at the same time.”

There is a major need for convergence in the smart home. One function is expected, but I’m thrilled whenever I come across a gadget that can do many things. An example of such a device is the Belkin SoundForm Elite Hi-Fi smart speaker, which does everything you’d expect from a modern smart speaker, and as a bonus is available in both Google Assistant and Amazon Alexa variants.

Choice is appreciated because let’s face it, the smart home is sometimes a one-sided affair. But there’s more to Belkin’s smart speaker than meets the eye — and that is what caught my attention when I first learned about its existence.

The extra cost of convergence

Functionally, the Belkin SoundForm Elite Hi-Fi smart speaker does everything its peers are able to perform. Whether it’s playing music or answering questions, there’s nothing it can’t do compared to speakers like the Google Nest Audio or Amazon Echo (4th Gen).

I ended up checking out the Google Assistant version of the speaker. I wish it were like the Sonos One, which comes as a single version that offers users the choice of using either Alexa or Google Assistant out of the box. With Belkin’s speaker, there are two separate versions so you’re stuck with whatever you pick. It’s worth pointing out that the model that works with Alexa also supports AirPlay 2, while Bluetooth connectivity is supported by both.

If there’s one thing about the Belkin SoundForm Elite Hi-Fi that sticks out like a thorn, it has to be its $200 cost. Even though there are sales right now that drops it to $150, it’s still a slight step above its direct competitors. However, there’s an ace up its sleeve that I think adds value here, and that’s the convenience of being able to wirelessly charge your smartphone.

Seriously, I’m a little surprised by how long it took for something like this to come out, but here it is and I can’t tell you how thrilled I am by the extra utility. I have it placed on my desk within arm’s reach, and I love how I can quickly charge my phones with the 10-watt charger — including those with thicker cases on them.

A little heavy on the bass

There’s a lot of jargon surrounding the speaker’s audio hardware, which features acoustics by Devialet. Its hardware consists of a 35mm full-range speaker driver and dual 70mm woofer drivers. The end result is a speaker that favors low-range audio, so that means you’ll experience deep bass.

I’m a little surprised by how long it took for something like this to come out.

There’s no hiding the bass with this spherical-shaped speaker. Even two steps from its lowest volume level, the bass is so pronounced that it overwhelms the mids and highs. I haven’t come across a speaker this bass-centric in a while, but that doesn’t mean it’s a terrible speaker. Some people will enjoy the heart-pounding beats it produces. However, if you’re listening to music where you want to catch the details in instruments or vocals, it’ll be tough to discern because the bass is so strong.

Using the Google Home app, though, there are settings to adjust the bass and treble — so it helps a little to lessen the overpowering tones of the bass. Thankfully, the two far-field microphones on the speaker are sensitive enough to make out my voice from the overwhelming bass when the volume is really loud.  Finally, touch controls are accessible on the speaker to adjust its volume, pause/play, initiate Bluetooth, and mute the microphone for more privacy.

There’s not a whole lot going on with the design of the Belkin SoundForm Elite Hi-Fi. In my opinion, it’s as generic as they come, featuring a somewhat spherical shape with the top portion sliced off to accommodate its wireless charger. A mesh fabric cover wraps around the entire speaker to give it a little contrast, but it’s difficult to say how well it’ll hold up against dirt over time.

While the design doesn’t command as much attention as the Nest Audio’s bean-shaped appearance or the mesmerizing, iridescent glow of the LED ring on the Amazon Echo (4th Gen), I’m willing to compromise because of its multifunctionality. It can still very well sit in an entertainment center all by itself as it matches just about any décor.

There’s a lot to like about the Belkin SoundForm Elite Hi-Fi. I’m most pleased by the fact that wireless charging is present because it means one less cable that needs to clutter up my desk and take up space on my power strip with yet another charger. However, it’s pricier than its direct rivals. At $200, it’s tough to justify paying the premium for effectively gaining wireless charging. However, it’s worth it if you can find one for $150.

If you’re looking to make an addition, the Belkin SoundForm Elite Hi-Fi is worth consideration.

Constructed mostly from tough plastics, the only questionable material is the mesh fabric that covers the speaker. It’s just as heavy as the Nest Audio at 2.8lbs, so it would be wise to keep these away from edges. There’s a two-year limited warranty that comes with the purchase, which covers defects.

Yes, especially right now when there are sales that have it for $150 instead of its normal price of $200. If you don’t want to pay full price, you might be better off buying one of its direct rivals and a wireless charger, but that means more clutter.

Topics
The best wireless routers for 2022
The best smart speakers for 2022
Best Prime Day Amazon Echo Deals for October 2022
Smart speakers vs. smart displays: Which is right for you?
You can save $170 on the Dyson Corrale straighteners today
Should you buy a Keurig on Black Friday or wait for Cyber Monday?
There’s a huge Instant Pot Black Friday sale happening right now
This robot vacuum is $119 for Black Friday, but it’s selling fast
9 Sonos tips, tricks, and little-known features
Make Starbucks at home with this coffee maker — $99 for Black Friday
Black Friday: These Roborock smart vacuums and mops are smartest of the bunch
You can buy an Amazon Echo Dot for $15 today, because Black Friday
Save $150 on this Segway Electric Scooter for Black Friday