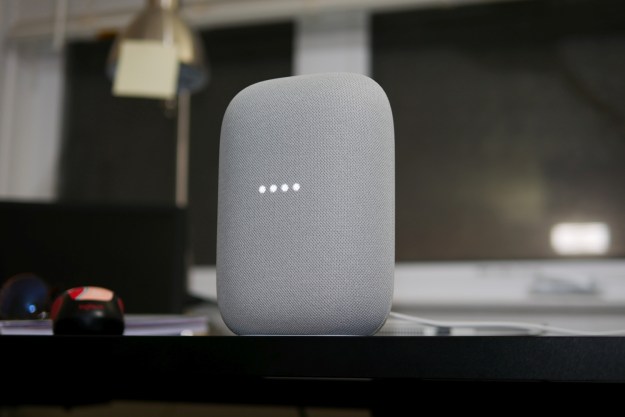 “Music never sounded this good in something so charming-looking. Plus it doesn't cost a fortune!”

It’s been nearly four years since the launch of the Google Home, and during that time, we’ve seen how smart speakers have helped foster the smart home’s growth. Google’s own portfolio grew tremendously with the addition of speakers both big and small. And beyond that, we’ve seen a handful of other useful smart home gadgets come out from the company.

The introduction of the Google Nest Audio, which many consider the spiritual successor to the Google Home, is coming to us at an interesting time. While sales for smart speakers continue to beat expectations, last year’s Google Nest Mini wasn’t the grandiose upgrade we were hoping for — and the Google Nest Audio is going to receive the same scrutiny.

Those who took the plunge early on and invested in the Google Home were treated to a new way of interacting with the smart home. Now the question is whether the Nest Audio has enough goodies to convince people to make the upgrade.

Taking the Google Nest Audio out of the packaging, the first thing that stood out for me was its weight. I was surprised by how densely packed it is, tipping the scales at a whopping 2.65 lbs. In contrast, the Google Home feels super lightweight at 1.05 lbs.

There’s a reason why it’s so heavy, though. From the outside, all there is to see is the fabric mesh material wrapping around the entirety of the speaker. It gives it a more neutral look, especially when combined with its tic-tac shape. Underneath the exterior, however, the Google Nest Audio features a metal chassis made of aluminum and magnesium — which explains why it feels so dense for its size. At such a hefty weight, it makes me a bit concerned about what would happen if it were to fall.

Google’s approach to a sustainable future is again on full display with the Nest Audio (always a good thing), as the enclosure is made from 70% recycled plastic. Its clean facade makes me wonder how well the exterior will hold up if it’s placed somewhere more active — like the kitchen countertop perhaps, where it would be exposed to potential spills, splatters, and other hazards that can dirty it up.

Embedded within the mesh fabric material on the front are the LEDs that come to life whenever you initiate Google Assistant or adjust its audio. Unfortunately, it lacks the Nest Mini’s ultrasound sensors that detect when your hand comes close to the speaker and automatically illuminates the LEDs. Adjusting the speaker’s volume is easy — just tap the corresponding touch-sensitive areas. The top- left corner lowers the volume, the top-right increases it, and the middle area acts as a pause/play function. In the rear, you’ll find a mute switch to cut its microphone and a proprietary power port.

Google’s design of the Nest Audio can be best described as a Google Home Max with a vertical, upright design. The natural look of the design meshes nicely with almost any decor.

The internal components make this a vastly superior speaker for music. With a 19mm tweeter and 75mm mid-woofer, Google says that the Nest Audio is 76% louder and has a 50% boost in bass over the Google Home. And you know what? Its audio performance speaks to that claim.

Don’t get me wrong, the Google Home sounded amazing, but I often found that its bass performance crackled at higher volume levels. There’s none of that whatsoever with the Nest Audio, which produces ample bass without distortion. Google specifically tunes the Nest Audio for a more neutral tone, resulting in a sound that balances the lows, mids, and highs. While this will appease some audiophiles, others may prefer a more bassy tone — which is why I appreciate controls for bass and treble adjustment in the Google Home app.

Similar to the Google Home Max, as well as Apple’s HomePod and Amazon’s Echo Studio, the Nest Audio leverages a couple new features that allow it to adjust its audio quality to any room. Media EQ allows the Nest Audio to adapt to whatever content you’re listening to (music, podcast, or Google Assistant), while Ambient IQ allows it to adjust its volume when there are sources of noise that come close to it, like a hair dryer, for example. If you approach closer to the Nest Audio, it’ll automatically increase the volume on its own — and subsequently lower it if you move farther away.

Ultimately, the Nest Audio is a superb choice for any audiophile. Its room-filling sound strikes a balance between clarity and bass, which can be made better by either pairing it with another Nest Audio for stereo output, or adding it to a speaker group. In the current lineup, it’s positioned between the Nest Mini and Home Max, making it an ideal choice for anyone who loves music, but doesn’t want to pay the heftier price of the Home Max.

So far, I can’t say enough positive things about the Google Nest Audio. But I feel that we’re getting to a point of complacency with smart speakers, and the Nest Audio is a prime example of this. Each iterative smart speaker we’ve seen, whether it’s from Amazon or Google, tends to be better-equipped for audio — and that’s what we expect in any successive gadget.

If we’re to look at the core functions, they don’t differ from Google Home. They grace us with the intelligence of Google Assistant, provide us with hands-free control of the smart home, and help drown out the background noise with their exceptional audio performances. That’s where it all stops, which is why I feel that the Nest Audio is too complacent.

There’s no denying that it’s capable of doing a lot of things. From making phone calls to ordering your favorite pizza pie, the Nest Audio has an extensive list of functions. However, it’s no different from past Google Assistant-enabled smart speakers. I would’ve loved to see it do more!

I feel that the Nest Audio is too complacent.

Perhaps being able to group several of them for true surround sound for watching movies at home? Or maybe integrate the functions of the new Chromecast, so the Nest Audio can connect to a TV and bring the Android TV experience. This is a fundamental problem that smart speakers will continue to face, unless they branch out and become more multifunctional.

It’s hard to not like the Google Nest Audio. Priced ideally at $100, it packs a substantial audio punch over the $50 Nest Mini, and it even can compete against the $300 Google Home Max. It’s perfect for audiophiles who crave good-sounding audio.

Because it’s meant to be stationary, the chances of it out having issues should be slim. But its dense weight could lead to damage if t’s dropped. If you’re worried about defects, there’s a 1-year limited warranty that covers parts and labor.

The $100 cost of the Nest Audio makes it significantly more appealing than, say, the $300 Google Home Max — so it’s hard to recommend any other Google Assistant-powered smart speaker for music. It’s also a better buy than the Google Nest Mini. But if you already own the Google Home, it may be a tougher call to upgrade given that the only real difference is the audio performance.

Not a fan of Google Assistant? Then the recently announced Amazon Echo (4th Gen) is the logical recommendation if you prefer Alexa instead.

You bet. Google’s investment in making it a more comprehensive speaker makes it a solid buy at $100.