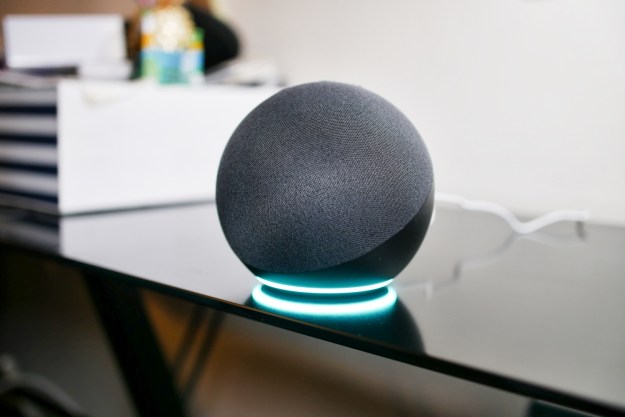 It’s hard to imagine that the original Amazon Echo smart speaker was released in 2014, growing to become one of the most popular smart speakers around. For many people, it was their introduction to the future of the home — where voice control became paramount in tasking a digital assistant to accomplish things. Well now, we have the latest member in the established line with the fourth-generation Amazon Echo.

While I was banking on perhaps a variant of last year’s third-generation model, Amazon instead surprised me (as well as many others) by introducing a proper successor. What’s interesting, though, is the radical shift in design, which breaks from the traditional cylindrical shape of previous speakers. With new offerings from the competition already announced, namely the Google Nest Audio and Apple HomePod mini, the Amazon Echo (4th Gen) clearly has a fight ahead of itself in becoming the standout winner this season.

When Amazon introduced the Echo (4th Gen) during its virtual September 2020 press event, I was skeptical about the new design. It was a radical shift from what we’ve been used to seeing, so it didn’t leave much of an impression on me. But as soon as I unboxed it, placed it on my desk, and powered it on, I was smitten. Seriously smitten, mainly because I didn’t expect it to look so good just perched there.

When we think of speakers, a rectangular form of some kind comes to mind, so for this to change it up (and break from tradition) is a daring move on Amazon’s part. The spherical shape isn’t over-bloated as I initially thought. Quite the contrary because it measures in at 5.7 inches at the base and 5.2 inches in height. Sporting this two-toned look consisting of a 100% post-consumer recycled fabric that covers most of the speaker, it’s a pleasant and charming design that accents any decor.

As usual, there are physical buttons on top of the speaker for volume controls, action, and mic off. Who knows if it’s intentional, but the LED light ring around the base of the Echo (4th Gen) was an ingenious move. Not only does it glow in a piercing color whenever I fetch Alexa, but it dazzles and pulses in various colors to accentuate Alexa’s listening and responses. The dynamic effect of the LED light ring is even more pronounced if it’s placed atop of reflective surfaces.

A refreshing change long in the making.

Amazon took a gamble on the design, and it pays off as a refreshing change long in the making. The only complaint I have is that I wish Amazon could just incorporate an LED display similar to the Echo Dot with Clock, just because it’d be nice to be able to tell the time quickly with a glance — as opposed to asking Alexa.

Adaptive audio ready for any room

One of the main reasons why people buy smart speakers is to listen to music, whether it’s leisurely or while hosting a big party. The Amazon Echo (4th Gen) doesn’t disappoint in this area. In fact, the Echo line, by and large, is known to deliver solid audio. Although, Amazon has clearly etched a distinctive line where it’s more of a mid-range offering in terms of audio performance after last year’s Echo Studio. It’s still incredibly capable of appeasing audiophiles, more so when it adopts the same room-adapting technology of the Echo Studio by sensing the acoustics of the room to enhance its performance.

Equipped with a 3-inch neodymium woofer and dual 0.8-inch tweeters, audio in the high-range is pronounced and clear thanks to the Dolby processing — with a rich bass that complements it. You can tweak some of its settings through the Alexa app, such as bass, midrange, and treble, but I find that it can still sound strained at higher volume levels. The lows seem to be impacted the most by this, producing a bit of strain with the bass.

On its own, the Echo (4th Gen) seems just a smidgen behind the Nest Audio’s overall performance, but it’s worth pointing out that you can pair it with other Echo devices too (including smart displays), for synchronized music playback for the entire home.

The Echo wouldn’t be what it is today without Alexa, the smart assistant that powers the company’s many smart home gadgets. I’ll be honest, I don’t use Alexa as frequently as I should because my preferred smart assistant is Google Assistant. That’s because I rely on Google’s services so much, so it’s the logical choice.

After reacquainting myself with Alexa over the last couple of months with the Amazon Echo Show (2nd Gen), and subsequently with the Echo (4th Gen), I have a new appreciation for how useful it is as an assistant. First and foremost, it integrates seamlessly with Amazon’s many services. For example, I recently made a purchase on Amazon for these Listerine Pocketmist sprays. On the day of delivery, I noticed that the Echo’s LED light ring was glowing in yellow. Yet, I didn’t know what it meant, so I asked Alexa. She told me that my order was just delivered even before I got the chance to check the notification on my phone.

This is just one of the many examples that show how Alexa is deeply intertwined with Amazon’s services. When it comes to controlling the smart home, she can accomplish the same task as Google Assistant. This, of course, is one of Alexa’s biggest advantages over Google Assistant — as there are far more Alexa-compatible devices out there than Google Assistant or Siri. While I feel that Google Assistant in my experience does a better job at responding to questions and requests based on contextual clues, I can’t tell you how much I’m amused by hearing Samuel L. Jackson’s voice on the Echo. He’s by far the most amusing celebrity voice.

Frankly, Alexa’s prowess doesn’t change here with the Echo (4th Gen). If you own an older Echo, you’re not going to find anything new here in regards to her abilities. Downloading more skills will obviously extend her functionality, but it’s again no different from other Alexa-enabled smart speakers and displays.

For most people, it may be an afterthought, but the Echo (4th Gen) is notable for Amazon Sidewalk. It’s an addition to the fact that it’s also a smart home hub with support for Bluetooth LE and ZigBee. If you have door and window sensors that leverage these standards, you will be able to set some of them up directly through the Echo and send commands to them as well.

The Echo (4th Gen) still packs a heavy punch on its own and offers a delightful all-around performance.

More importantly, though, is that it can be used as a Sidewalk Bridge, which will help compatible devices to connect to it. This new low energy signal has greater implications for how devices communicate, as Amazon Sidewalk becomes more prevalent. Considering how bandwidth is a constant problem to tackle in the home when more and more devices are connected to the Wi-Fi network, Amazon Sidewalk aims to alleviate this congestion and connectivity struggle.

What does this all mean? Quite simply, it effectively will provide more coverage for compatible devices. The upcoming Tile tracker is a perfect example of Amazon Sidewalk’s reach. Usually, you’d be able to track one down within close proximity via Bluetooth LE, which generally doesn’t exceed hundreds of feet away. If you happen to leave it behind at a friend’s place who happens to have an Echo (4th Gen), the Tile tracker can still be located even if you travel back home. That’s because the Echo acts as a Sidewalk Bridge, allowing compatible devices to communicate with it.

This is all new and interesting, but this addition will greatly help in the way Internet of Things devices communicate. Despite that, the Echo (4th Gen) remains a fantastic home hub to control and access all of your existing smart home devices.

Amazon’s gamble in bringing a fresh new take with its latest Echo smart speaker pays off, largely by the fact it’s a refreshing design that’s charming, offers an exceptional audio experience, and all the smarts that accompany Alexa. Google’s Nest Audio may have the edge when it comes to audio performance, but the Echo (4th Gen) still packs a heavy punch on its own and offers a delightful all-around performance. It’s priced to attract people at $100, making it a strong consideration as your next smart speaker — more so if you’re heavily invested in the Amazon ecosystem.

There’s little concern about something breaking down, primarily because it’s going to remain stationary. However, it does come with a 1-year limited warranty to cover defects, but Amazon also provides accident protection for a cost.

Music aficionados will prefer the Nest Audio’s performance in delivering better audio quality. Then again, the Amazon Echo Studio is the speaker to choose if you’re an audiophile, but you’re paying a hefty cost to pick it up.

There’s also this question of whether or not smart speakers are valuable choices when smart displays come into the equation. For the $100 cost, it’s hard to overlook the Amazon Echo (4th Gen) because it presents a well-rounded package. But then again, it lacks some of the added conveniences that smart displays offer. The Amazon Echo Show 8 makes for a convincing option for a price that’s a little more or less depending on whether it’s on sale.

You bet! Whether you’re looking to upgrade a previous speaker or make an addition to your existing collection, the Amazon Echo (4th Gen) offers outstanding value for its cost — plus it looks oh-so-good with its new spherical design!