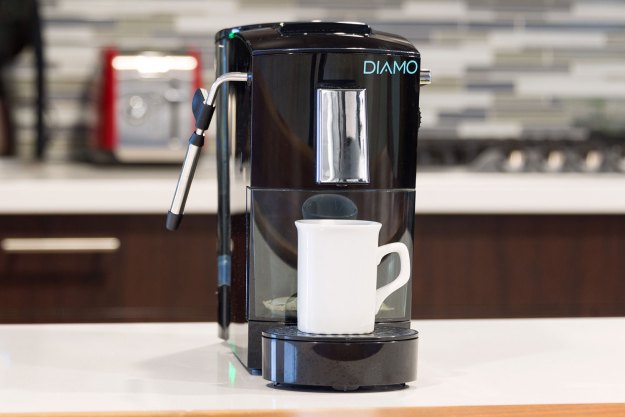 “The Diamo One’s espresso can hang with the coffee kings — at a price.”

Automated espresso machines continue to upend the coffee industry, but a new company named Diamo recently decided it can right the balance. Its entry, an eponymous machine called the Diamo One, attempts to let aficionados craft coffee shop-quality drinks from the comfort of their kitchen.

Featuring a stainless-steel steam tube, compatibility with ESE pods – that’s easy serving espresso, of course — and easy, one-touch brewing, the Diamo One has all the makings of a proper espresso machine. To give it a true test, we stuck it in the high-traffic Digital Trends kitchen for a few weeks to see if it could satiate our desire for espresso, prove as easy to use as advertised, and earn our highly esteemed Editors’ Choice rating. Does it satisfy or come up dry?

Unboxing and setting up

Setting up the Diamo One requires nothing more than simply unpackaging the machine and its components — i.e. water reservoir and drip tray — and plugging it into an electrical outlet. Additionally, we ran the machine without any ESE pod in it to clean the system prior to our first use — after the user manual suggested we do so, of course.

The only other requirement we needed before enjoying a cup of Diamo One espresso was to obtain a package of ESE pods. Luckily, our review model came with a healthy helping of Illy-brand pods, meaning not only were we able to get the thing up and running immediately but we’d be savoring some high-quality coffee, to boot.

Located directly on top of the Diamo machine are a series of clearly marked buttons (Power, Steam, Single, and Lungo) which make it particularly easy to navigate the rig itself. After pushing the power button, its surrounding light blinks green while the machine heats up — a process which took only roughly 35 to 45 seconds during our tests.

The built-in steam tube is a nice addition, but at $50 more than the competition, that’s a tough sell.

Once heated, a simple press of the button with the small or large cup symbol begins the brew process for either a single or double (Lungo) espresso. It’s worth pointing out that while the drip tray is installed, only a small espresso mug or cup is capable of fitting underneath the machine. Since we crafted a handful of Americanos during our time, we removed the drip tray and situated a taller coffee cup under the Diamo’s nozzle; it wouldn’t be too hard to just fill a small cup or two with espresso before pouring it into a larger cup, if one desired.

The actual brew process for either type varied — one brews a single and the other a double, after all — with a single taking roughly 30 seconds and the double needing a full minute and 11 seconds. Neither is a terrible amount of time to wait for high-quality espresso, so this is certainly one of the Diamo One’s high points.

As for the taste?

We used Illy-brand ESE pods with the Diamo One throughout our review, meaning we were consistently privy to a top-shelf brand of coffee from the get-go. This coupled with a powerful, 21-bar Italian pump allowed us to quickly brew an incredibly delicious cup of espresso. A pump capable of 21 bars of pressure is more powerful than most, overkill some might suggest. Less pressure might result in weaker coffee; too much and … well, water can only be pushed through coffee grounds so fast. We found suited our taste (as did the coffee itself).

Furthermore, the Diamo One routinely brewed both single and double shots of espresso with a nice layer of crema on top — that’s the light, brown colored liquid that pours out during espresso extraction. Often referred to as the “Holy Grail in the espresso world,” crema is what coffee lovers strive for, and the Diamo One has it in spades.

Outside of brewing espresso, the Diamo One affords owners the ability to craft lattes and cappuccinos (and other drinks) by way of its stainless-steel steam wand. Additionally, the wand boasts the ability to dispense hot water if a Diamo One owner prefers a cup of tea to a shot or two of espresso.

Without a standout feature, the $250 price stings.

Frothing milk takes a few more steps than simply brewing espresso —heating up the machine, pressing the Steam button, and switching the machine into “Steam” mode before eventually submerging the wand in a cup of milk. But we quickly got the hang of it. It’s absolutely paramount to avoid touching the steam tube while it’s in use, as well as few minutes after, as it tends to stay fairly hot and could present a burning hazard. Thankfully, we never ran into this issue ourselves, after reading Diamo’s warning in bolded all caps in its User Manual. Yikes!

For what it’s worth, the Diamo One’s steam tube is really the only feature to make this espresso machine stand apart from its automated competition.

Any Diamo One espresso machine purchased directly from the manufacturer’s site itself comes with a one-year warranty, which covers any “defeats in workmanship and materials” under normal use.

After a few weeks enjoying the Diamo One’s espresso offerings, it wouldn’t be reckless to say it could hang with Nespresso or Keurig, albeit, at a price. Beyond being an easy-to-use alternative, however, it doesn’t do anything out of the ordinary – certainly nothing to justify its higher price point. Sure, the built-in steam tube is a nice addition for anyone who enjoys lattes and cappuccinos, but at $50 more than the competition, that’s a tough sell.

Without a standout feature, the $250 price stings. With competitors running anywhere from $100 to $200 — top of the line versions, at that — the Diamo One’s price tag doesn’t do the machine any favors. Even if it does whip up an impressive cup of espresso, consumers can get a similar product cheaper. All this makes the Diamo One is a tough sell.

Depending on your preference for preparing potables (cold brew, drip coffee, espresso, etc.), the alternatives are many. The Diamo One’s main competition lies with the Nespresso and Keurig. Its ESE pods put the Diamo One sort of into a class all its own, but the end result — i.e. a single or double shot of espresso — remains similar to what you’d find with the opposition. In terms of price, the Diamo One is a touch more expensive than Nespresso and Keurig’s latest espresso machines, which each retail for roughly $200.

Made primarily of what appears to be flimsy plastic, the Diamo One isn’t built to withstand a beating. Granted, espresso machines hardly face much in the way of potential damage, but we prefer a $250 machine to be constructed of something stronger. So will it last? If owners refrain from dropping the machine from much higher than about one or two feet of the ground, absolutely. Furthermore, its stainless-steel steam tube held up admirably to consistent use without breaking, so at least part of it appears to be durable.

Depends. How much do you consider a built-in, stainless steel steam tube is worth? This feature didn’t woo us, but there’s likely throngs of people who see this as a boon for their daily coffee experience. We’ve said time and again that other automated espresso machines can brew the same high-quality java at a much lower price.

So, we come back to the question: how much is steam worth to you?

If your answer is “not very much,” then the Diamo One isn’t for you. It’s no doubt a solid rig for crafting coffeehouse-quality espresso, but at the end of the day, its the price that ultimately left a sour taste in our mouth.

Drinkworks is shutting down, reimbursing customers

The best Nespresso machines for 2021