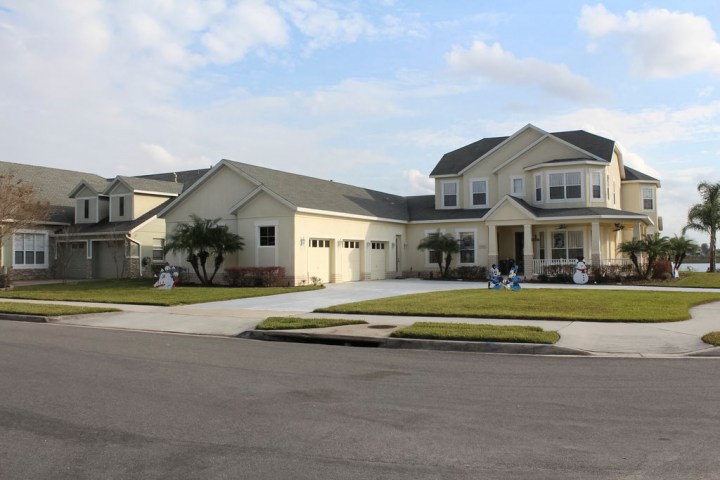 Not all of us have the luxury of living inside a fairy-tale, but for the lucky future owners of this Disney-themed mansion in Florida, dreams really do come true. While you may not be able to tell from the home’s exterior, if you ever manage to make it inside the so-called Mickey-and-Minnie house, you may come to believe that pumpkins can turn into carriages after all. Located in Windermere, this 4,822 square-foot property is a veritable alter to all things Disney.

There are seven bedrooms, four full bathrooms, and two half baths in the mansion, but really, what you’re here to see is the Disney memorabilia, alongside the unique wall treatments and mouse-eared light fixtures. And it’s not just Mickey and Minnie who are prominently featured throughout — there’s also Snow White stained glass, Genie coming out of the bottle, and a bathroom that is entirely dedicated to Tinkerbell of Peter Pan fame.

One of the bedrooms features a large painting of Aladdin and Jasmine flying away on a magic carpet, while a full-sized bathroom pays homage to the characters of Frozen.

The current owners of the house are — get ready for it — Mickey and Minnie Baus. They almost lost the property a few years ago to foreclosure, but managed to become current on their payments and maintain their two-story home for a bit longer. When the Bauses bought the home, they paid $550,700, and it’s unclear exactly why the couple is now choosing to leave their home. It’s also unclear if they’ll be able to find anyone else as Disney-obsessed as they are.

But even if you’re not an ardent Disney lover, you may be interested in the home’s location. The home sits upon a lake, and every time Disney World puts on a fireworks show (which is to say, every night), you’ll get a full view of it. There’s also an extended three-and-a-half car garage plus workshop, as well as a large kitchen that’s ideal for hosting big parties.

As per housing website Zillow, the property has been on the site for a little over a month, so it may take some time before a Disney fanatic gets his or her hands on what might actually be the real happiest place on Earth. Just know that it’ll set you back at least $888,000.

The Signature Kitchen Suite has a smart fridge that costs almost $10,000