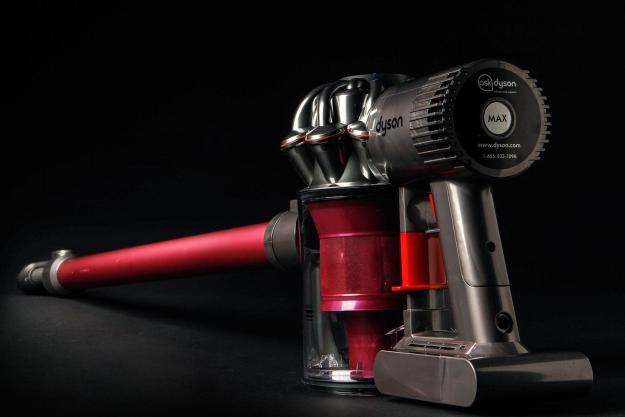 “The Dyson DC59 Motorhead has remarkable good looks and can practically pull the fibers out of your carpets, let alone the dirt. If only the battery lasted longer…”

With a powder-coated pink body and a name that calls to mind the classic heavy-metal band, the new DC59 Motorhead has a little something for everyone. It’s beautifully designed, attractive and convenient – yet powerful and versatile enough that you can use it in the shop or to clean out the car.

The Motorhead is the newest cordless vac from Dyson, the crazy company that has been reinventing the world’s ordinary appliances, from fans to vacuums to hand dryers. (It’s also rethinking extraordinary ones, including Google Glass.) The Motorhead is an update to the DC59 Animal, a very similar cordless vacuum released earlier this year. The Animal boasted a newly designed digital motor and claimed three times the suction of any other cordless or handheld vacuum. This may be because most other cordless vacuums suck; it may simply be because Dyson built a better mousetrap.

The Motorhead’s assembly is dead-simple: Ikea should make gear so foolproof.

The Motorhead builds on the advances of the earlier vacuum, adding a direct-drive motor to the brush head to give it 75 percent more cleaning power, the company claims.

“By putting a motor directly in the brush bar, we’re able to push bristles deeper into carpets for superior performance, while maintaining the versatility of a handheld machine,” James Dyson said in a press release announcing the new product.

For all its power, the Motorhead is surprisingly light. The box is just 10 pounds, and light enough that I could sling it under one arm as I walked down the street – and these biceps aren’t screaming “tickets to the gun show.” Open the box and you’ll find a 2-foot long pink-metal tube, a variety of attachments and suction heads, and the body of the vacuum, about the size, shape and looks of your average Cuisinart food processor.

The Motorhead’s assembly is dead-simple: Ikea should make gear so foolproof. The various heads click into the extension tube, and the tube clicks into the vacuum. That’s it. The Motorhead is designed to be hung on a wall when not in use, and the wall-mount charging station is equally simple to figure out.

It’s a good thing the assembly is so easy, because the manual had me scratching my head. It’s meant to be simple, so there are almost no words and plenty of pictures. They’re dumbed down to the point that they’re counterintuitive, however. Oh, and be careful with that powder-coated finish –it scratched during assembly. Yikes!

Pull the trigger on the handle and the DC59 kicks into action, with a sound more like a very loud fan than your typical vacuum. That’s because the head is channeling its energy into maintaining suction, rather than generating noise. Indeed, when I lifted the brush head off my rugs I could feel the vacuum clinging on – “Just one more bit of dirt! Please, let me keep going!” It seemed to say.

The versatility of the Motorhead had me gushing to friends, who all looked at me like I was crazy. “Enough about the vacuum,” they said. But I mean it. Take off the pink extender tube and you’ve got a perfect lightweight unit for pillows and upholstery, or stairs. Take it outside and you can vacuum the car. I’ve owned several cordless vacuums, and never once considered them powerful enough for such a task.

Sure, it’s portable, but how good is it? Suction and cleaning power are certainly remarkable across the dirt spectrum: From the cat hair, dustballs and other light bits of filth that pile up in the corners to actual dirt clumps, the Motorhead could handle it all. I “accidentally” spilled cornflakes everywhere. It sucked. I ground some dirt into the floor. It sucked. I dropped a few metal ball bearings. Whoop! There they went.

The versatility of the Motorhead had me gushing to friends, who all looked at me like I was crazy.

That said, gather ye dirtballs while ye may. Cleaning time with a cordless like this is limited. The DC59 Motorhead is good for only 24 minutes of use, Dyson claims – 2 minutes less than the DC59 Animal. In my testing, I squeezed out 19 minutes at best. And it takes 3 and a half hours to recharge as well: Run out of juice halfway through a rug and you’ll find yourself counting the hours until you can finish up.

Others have said this time was sufficient to clean a house with. After all, take a finger off the trigger and the Motorhead is off, conserving its battery for the rest of your dirt. I found it maddening to be halfway through cleaning with a dead battery and no options.

The Motorhead has a large button tauntingly near your thumb labeled “Max.” Push it and you’ll enable Boost Mode, an extra shot of juice to suck up whatever disgustingness ordinary mode can’t handle (and what exactly did you spill, by the way?). Don’t make the mistake I did by enabling it full time, which seems like a great idea but shrinks the battery life to a paltry 6 minutes.

To be fair, all battery life isn’t the same. My Black and Decker cordless drill lacks the oomph to do much of anything if its battery is running low. That’s a nickel-cadmium battery, however; Dyson uses a lithium-ion battery, a nickel-maganese-cobalt mash-up that doesn’t weaken as it loses charge. It just gives up when it’s flat out dead. Still, 5 or 6 minutes of boosted cleaning gets very little mess cleaned up.

Despite the very limited runtime, the Dyson is real pleasure to use: Cleaning is actually fun with the Motorhead. If the company could find a way to triple the battery life, the DC59 Motorhead would be a marvel.

Change your habits a touch, however, and the issue goes away. Rather than vacuuming the whole house at once, do half of it one day and then half at another point. The Dyson brings so many features and such versatility you’ll find yourself looking for tasks for it. Dirt in your car trunk? Bring it on. Dust up in the attic? On it. Next-door neighbor has a mess? Draw the line. This is your baby, after all.

How do I clean my Dyson cordless filter?

Yes, Dyson’s newest vacuum uses a green laser to see what you can’t