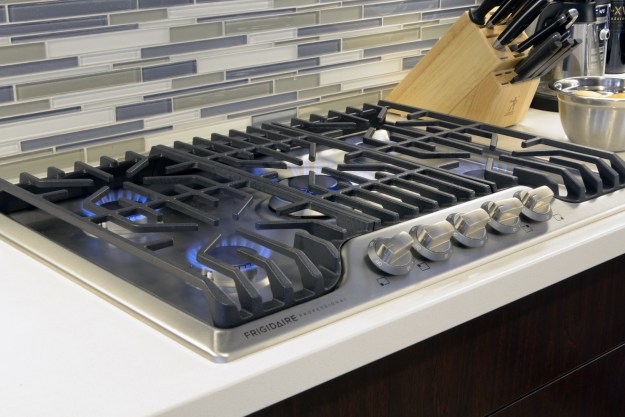 “Frigidaire resilient cast iron grates give the cooktop a sleek look and lifetime of durability.”

A proper cooktop can improve your life in the kitchen, and make cooking fun again. Enter Frigidaire and its Professional line of cooktops. The appliance company recently released an updated version of its popular Gas Cooktop and Griddle combination.

To get a feel for whether Frigidaire managed to live up to its Professional name yet again, we decided to give its latest cooktop a run for its money, installing it in our office kitchen in Portland, Oregon. Over the course of a few weeks, we put the stove through its paces, cooking everything from pan-fried fish to a healthy helping of banana pancakes — thanks to its companion griddle. Here is what we thought of the appliance during our time spent cooking with it.

Aesthetically speaking, Frigidaire’s latest offering is clean and crisp. Wrapped in sleek stainless steel (which deftly avoids hanging on to fingerprints) and accented with deep black cast iron, it’s a visually pleasing appliance that’s as beneficial as a proper rug — i.e. it can harmoniously tie a kitchen together. Furthermore, at 30 inches, the Professional Gas Cooktop won’t consume much valuable kitchen space, leaving plenty of available countertop real estate for other use.

Frigidaire resilient cast iron grates give the cooktop a sleek appearance and likely a lifetime of durability.

Equipped with five separate burners, the Frigidaire Professional Gas Cooktop makes it easy to switch between a high-powered output perfect for getting a quick rolling boil, to a heat level ideal for a mellow simmer. Its cast metal knobs allow for consistent precision control over the heat, perfectly avoiding the age-old issue of turning the flame too far up, then too far down, and again and again. This feature alone makes cooking with Frigidaire’s cooktop that much more efficient, thus producing a more positive experience — during our tests, at least.

While some may prefer an easily cleanable electric or induction cooktops to a gas grill, Frigidaire’s Professional is well worth the extra elbow grease. Its continuous grates made it incredibly easy to slide a pan or pot from one burner to the other without much lift — literally, all it took was a simple slide across the grate. Though this may seem like a relatively small advantage, anyone who’s cooked multiple dishes on their stove knows this is a supreme feature.

Concerning the construction of the grates themselves, Frigidaire outfitted each one in extremely resilient cast iron that not only gives it a sleek appearance but essentially guarantees a lifetime of durability. Additionally, removing each grate is done by simply lifting either of the three sections straight up — they aren’t locked into anything, only relying on the weight of the cast iron to keep it in place.

As mentioned above, a gas cooktop typically requires more attention during a cleaning session because it has several moving parts. In addition to the removable cast iron grates, each burner also boasts a small circular (and removable) top. Because of this, cleaning the appliance requires physically removing the three cast iron panels, as well as each burner topper — assuming they were dirty enough to warrant a cleaning.

During our tests, we found Frigidaire’s Professional Gas Cooktop to hang on to a handful or two of spattered grease spots, yet it refrained from looking entirely grimy after cooking a filet of fish. While cooking the fish was done with ease, we decided to merely heat a large pot of water to see how quickly and efficiently the cooktop excelled at creating a boil.

For the test, we boiled the pot of water using the PowerPlus Burner (on both Medium-High and High heat), as well as the back-left burner to see the difference in boil times. Concerning the PowerPlus Burner, a pot with 6 oz. of water took roughly 10 minutes and 17 seconds to reach a rolling boil on Medium-High heat, while a similar pot of water took just nine minutes to start a rolling boil on High. While testing the back-left burner, we found it to take a touch longer, reaching a rolling boil around 12 minutes and 15 seconds.

Though none of the times are wildly different from each other, the tests help show off the efficiency the PowerPlus Burner affords users. Having the ability to quickly heat a pot of water is a welcome feature in almost any kitchen, but you also want some versatility with the burners for simmering and other functions. Furthermore, seeing the disparity between the PowerPlus and the back-left burner show its no mere gimmick.

With the boil test out of the way, we decided to give the companion cast-iron griddle a try — plus, who doesn’t love banana pancakes? Featuring one side that lives up to its griddle name, the other boasted a series of slats that proved perfect for grilling bacon. What was especially useful was the size of the pan itself. Perfectly measured to span two burners, we were able to utilize the entire cooking area while whipping up the pancakes.

Our pancake endeavor proved not only to be a rather delicious test but one which allowed us to get a better grasp of what it’s like to cook using cast iron on a cooktop range. For starters, it was paramount we waited for the entire griddle to heat up as pouring pancake mixture on it while semi-heated produced a few unevenly cooked pancakes. Nevertheless, once it was entirely heated up, the pancakes cooked to perfection.

Furthermore, it’s worth noting that once cooking with the griddle or grill concluded, the pan itself remained incredibly hot, meaning we had to wait a while for it to cool before cleaning it off or using the other side. Though one might feasibly have the ability to simply grab a couple oven mitts and flip it over, its heavy weight — it is cast iron, after all — makes it a touch tougher to maneuver with ease. This certainly didn’t take away from its ability to whip up a batch of pancakes but did prompt a pause in cooking.

Although much of our time spent with Frigidaire’s Professional Gas Cooktop proved to be a rewarding experience, it didn’t come without at least one peccadillo. Though it didn’t occur every time we booted up the range, we periodically experienced a tough time getting a burner to ignite, hearing roughly five or six clicks before it would light. Granted, this isn’t a terribly awful problem but it’s a touch worrisome to see something like this occur on a brand-new cooktop. Not only do you expect it to light quickly, but no one would be very keen on the idea of dumping a bit of excess natural gas into their home while they wait for it to ignite. Again, this is a minor nitpick but something worth mentioning on an appliance that costs $1,500.

Electrolux, Frigidaire’s parent company, includes a one-year limited warranty on the Professional Gas Cooktop in which it will pay for any repair or replacement cost of defective parts. However, it won’t cover any cooktops which don’t have a serial number, weren’t bought specifically through Electrolux or a certified retailer, or due to some other human error outside of the company’s manufacturing.

What differentiates one gas cooktop from another often comes down to the relative power each burner affords its owner, how easy it is to clean the range, and its relative durability. In the case of Frigidaire’s Professional 30-inch Gas Cooktop, it checks each of these boxes with ease. A stylish, stainless steel cooktop outfit with strong cast-iron grates, Frigidaire’s latest venture into the gas range space is as impressive as they come. Furthermore, its inclusion of a companion cast-iron griddle makes it an even more appealing option for anyone’s kitchen.

When it comes to gas cooktops, the alternatives are many. Be it a model from GE, Whirlpool, KitchenAid, or Maytag, among several others, there exist a bevy of appliance companies offering their own take on the latest and greatest in cooking surfaces.

Narrowing the competitive field down to only other cooktops that feature five gas burners and measure 30 inches, the likeliest of alternatives would have to be KitchenAid’s standard Stainless Steel Cooktop and GE’s deep recessed Gas Cooktop in Stainless. Both feature cast iron grates like Frigidaire’s model, while GE’s sits slightly higher due to its LED indicator knobs and 20,000 BTU tri-ring burner. Checking in at slightly cheaper than the Professional Gas Cooktop ($1,400 for the KitchenAid and $1,300 for GE’s model), choosing between the three merely comes down to personal preference and — most likely — brand loyalty.

Made primarily of stainless steel throughout its cook surface, stainless steel cast metal for its knobs, and durable cast iron for its grates, Frigidaire’s Professional 30-inch Gas Cooktop is built to last. During our time testing the appliance, the entire unit hardly sustained even a moderately noticeable blemish (outside of oil splatter here and there) and, to be honest, we weren’t deep cleaning it after every use.

Due in part to its cast iron’s rugged durability and the fact the rest of the appliance is wrapped in stainless steel, the chances of this needing to be replaced due to damage are incredibly low. In other words, this is a cooktop anyone can purchase and not think twice about for many years.

Yes. As far as gas cooktops are concerned, Frigidaire’s Professional 30-inch Gas Cooktop (and companion cast-iron griddle) is as durable and aesthetically pleasing as they come. Featuring cast metal knobs which make it easy to precisely set the temperature of each burner, a powerful fifth burner, and easily removable cast iron grates which make the typically tough cleaning process of a gas cooktop easier, this range has a lot to enjoy. If you’re a fan of Frigidaire’s appliances and like the look and feel of cast iron (who doesn’t), then this is a great choice.