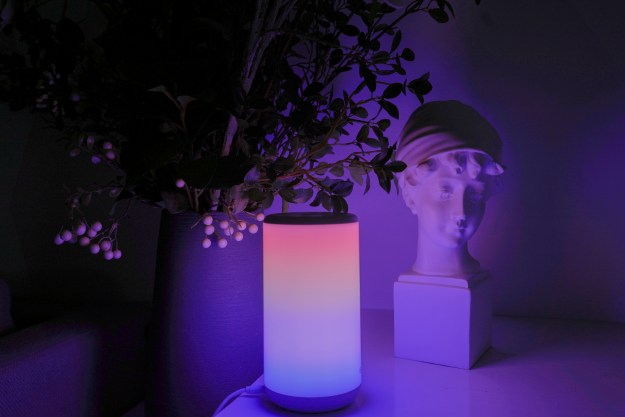 “The Govee Aura table lamp is a smart lamp that uses RGB colors to light up its 360-degree surface.”

Smart lighting is one of the easiest pieces of smart home tech that you can integrate into your home. It’s simple, rarely requires anything special, and it adds a certain flair to your home that no other smart home category can. Sure you can get your oven to talk to your phone, and that’s a nice trick to show off at parties. But lighting has a certain subtle charm that’s not quantifiable.

So far the majority of smart home lighting I have in my home comes from Philips, and my attempts to expand outside the Philips sphere have met with disaster. Therefore, when Govee offered me the chance to try out its table lamp, I was skeptical. My skepticism rose from two places. First, they’re a lighting company that’s not Philips and also, I don’t use table lamps in my house very much. My house has pretty much all the lighting fixtures in the ceiling. All the same, I wanted to give it a shot. So let’s dive in.

Right out of the box, the Govee Aura Smart Table Lamp is a fairly cheap feeling, plastic lamp with five buttons on the top, and branding that is hard to miss on the front bottom of the lamp. The power cord has a small brick on it which detracts from the overall look of the lamp. It’s a small brick — so small it actually feels a bit unnecessary, so overall, this was not an auspicious start.

The lamp is a cylinder that’s about 8 inches tall and about 4 inches around. When lit, only about half an inch on the bottom and a quarter inch on top serves as a sort of bezel. The lamp is bright and can get to 350 lumens and has a temperature range of 2200 – 6500K. Also inside is what Govee calls RGBICWW lighting, which is a fancy way of saying animated, multicolored lights. One of the nice things about the hardware is that the shell is translucent enough to clearly transmit colors, yet doesn’t reveal the mechanisms inside that would dispel the illusion.

Personally, I prefer buttons on top just because touch-sensitive panels have a tendency to be either too sensitive or not sensitive enough. One common thread for most smart lighting lamps is they tend to come in a wide variety of form factors. It’s hard to say if this is “better or worse” than the “Tree of Light” smart table lamp from CET; it comes down to personal preference for your decor.

The Govee Aura Smart Table Lamp is controlled primarily through the Govee app which allows you to use various effects and lighting patterns. You can have the lights move to music, or just display a specific pattern. You can even set up a customized pattern based on your color tastes. Govee also has a few dozen animated patterns that swirl the colors around inside the lamp, some of which produce a pretty cool effect while others move at a somewhat janky pace which quickly dispels the illusion of fish swimming in a tank.

Still, I particularly liked the animations done within the lamp. You could pick one of several animations and watch a sunrise, or watch clouds drifting in the sky, or the aforementioned fish swimming in a bowl. There were a lot of choices and I found them to be a delightful touch. Govee really got creative here which is great because when it comes to things like this, I’m one of the least creative people I know.

Whether it’s for your living room or a kid’s room, there’s a design in the app that you’ll enjoy.

Govee’s software even lets you configure custom color patterns and will help you out by suggesting national flags, stars, seasons, and even the colors of the earth or one of the other planets in the solar system. Govee has put a lot of thought into this software, but in some places, it falls just short. For example, yes, Govee will suggest the colors of the earth, but it only lets you pick one at a time. I’d like to cycle through all the colors of Mars; that would look really cool.

Govee wants you to enjoy your RGB lamp in a variety of ways. You can customize it yourself, or let the Govee software team handle things for you. You can set the lamp on a timer and have it wake you up. If you don’t feel like whipping out your phone and opening the app, you can tap the buttons on the top to turn the lamp on or off, adjust the brightness, and even turn it onto music mode. In short, I wasn’t a fan of table lamps before. Now, I’m eyeing places in my house where I could put another one.

With its dazzling effect, the Govee Aura Smart Table Lamp can potentially take center stage wherever it’s placed. But at the same time, its vibrant colors and animations add a level of ambiance that other static lights lack.

This is not a perfect product. The build quality is questionable and probably wouldn’t survive a fall off a table onto a hardwood floor. The chunk on the power cable is off-putting. The branding, located front and center on the lamp, is frankly cheesy. But overall, I like what Govee is doing here, and that’s mainly due to the software. Yes, there are some shortcomings there as well, but I imagine those would be fairly easy to fix.

We have a roundup of the best smart lamps you can buy today; there’s no shortage of them. The closest one to this one would probably be the Aukey Touch RGB lamp, which looks very similar to this lamp, but has a touch-sensitive base as opposed to buttons on the top.

While it costs substantially more, the Philips Hue Iris is another kind of table lamp that, of course, plays well into the Philips Hue ecosystem. On top of that, you can direct the light towards walls or wall art for a neat accent light.

The build quality on this lamp is not the greatest. It’s pretty much plastic top to bottom which has some shock-resistant qualities to be sure. All the same, I’d be nervous placing this too close to the edge of a table, especially over a hardwood or tile floor. The lamp is covered by a one-year limited warranty from the date of purchase which is nice, but there’s no telling how long this would last.

Yes. This is a neat product that can be a lot of fun. Whether it’s for your living room or a kid’s room, there’s a design in the app that you’ll enjoy. In fact, there are probably several designs you’ll like. At fifty-five dollars (as of this writing), this isn’t the least expensive smart table lamp out there, but the app development really shows with Govee. Plus, it turns out smart table lamps are fun! Who knew? I really dig this lamp and I’ll definitely start with Govee when shopping for smart lighting in the future.