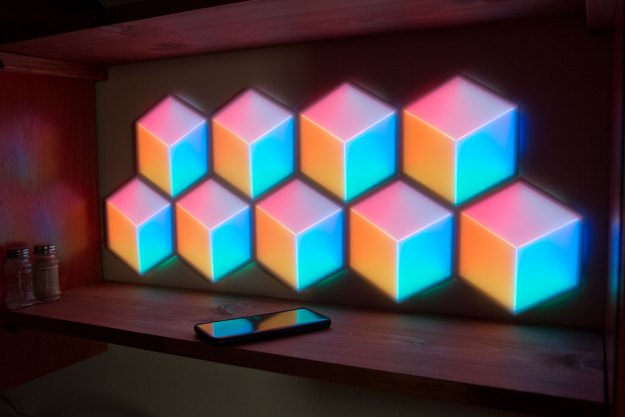 Govee continues its frontal assault on noted wall light panel behemoth Nanoleaf with its new Glide Hexa Pro panels. On the surface, these might look an awful lot like Govee’s previous hexagonal light tiles just with a few more LED strips inside to make them look cubey, but there are a few other features that set them apart.

The set-up process for the Govee Glide Hexa Pro is very similar to its predecessor. The app runs you through layout planning as a starter. It’s really important to take your time with the measurements if you don’t want to be stuck repositioning and potentially running out of adhesives. My final positioning for this set ended up off-center because I forgot to take into account how a top row of tiles sinks into the bottom. Though you can place them however you like, flipping the tiles so they’re upside-down cubes doesn’t look great. It’s much easier to maintain the illusion if the separator is in the standard “Y” orientation.

Once the plan is set, you’ll plug your power cable into the dedicated slot on the back of the tile, then the app will suggest which slot to put the extension cable based on where your next tile will be. Then it’s just a matter of peeling off the adhesive, pressing the tile on your wall, and repeating for the rest of your tiles. The nice thing about this system is that the adhesives are actually on a separate mounting plate, from which you can remove the LED tile. This makes it easier to remove the adhesive later without having conspicuous pull-tabs jutting out from your light. (I’m looking at you, Nanoleaf Canvas tiles.) The mounting plate also gives the tiles a bit of elevation for light to shine underneath. The one big thing I was missing in the setup versus the original Glide Hexa was a physical alignment piece, which helps ensure new tiles are properly snug and aligned with the others during placement. I assume this is because the top layer of the tiles on the Glide Hexa Pro are slightly domed to further accent the “cube” look, making a squared-off guide impractical. Luckily they still include a level.

I would have also liked to see interoperability between the two models considering their similar connection mechanism. Being able to take an existing Hexa array and extend it with a batch of Hexa Pro tiles later on the same power supply, connectors, and software management would have been really nice. This kind of modularity remains a big selling point for Nanoleaf. To accommodate the extra LEDs, the power supply on the Glide Hexa Pro is beefy. This makes it a bit more challenging to hide when you’re aiming for a seamless look. That said, the cable keeps the in-line microphone for live music sync and a hardware power switch, which remains handy for when the Wi-Fi is moody. I still feel sketchy about smart lights having internet-connected microphones peppered through the house, but odds are if you’ve got smart speakers around anyway, you’ve already written off your privacy.

The Govee mobile app continues to impress. The aforementioned music sync affords lots of entertaining effects, providing enough time to fiddle. This mechanism works better than software-based music sync features, like Hue’s Spotify integration. The app can offer helpful color pairing suggestions, though it goes overboard with a huge page dedicated to preset color palettes from stock images of various foodstuffs, and assigning moods to certain colors. Orange means “concern,” apparently. Preset animations have equally awkward subheadings like “Life” and “Emotion,” but the results still look great. Being able to make your own with a wide range of animation types, directions, speeds, and origin points gives us nerds a whole lot to chew on. The Glide Hexa Pro adds a few new animation types that produce cool rotations within each of the three cells within a tile. Google Assistant and Alexa tie-ins work just fine, though we’re still holding our breath for Apple HomeKit support. Jamming an online store and social network into the app remains overbearing. Banners on the front page routinely advertise stilted community events which have nothing to do with me turning on my bathroom lights.

New on the feature list is PC sync. Since our last review, Govee has introduced its own PC app that plugs into Razer Chroma. This means that like a range of Razer gaming hardware and other lighting partners, select Govee lights can reproduce what’s showing up on the screen. Chroma also has partnerships with game developers for customized lighting experiences. So if you’re playing Apex Legends, for example, your Chroma-enabled lights will blink red when you’re under fire, or have a cool light blue cycling animation at character select. Chroma is generally assuming you’re dealing with tiny lights that are built into your mouse, keyboard, or desktop PC tower, but when it’s being applied to bigger lights like wall tiles that are within your view, it can be a little distracting from the main event. This is exacerbated by Govee’s default brightness levels tending to be on the high side. For that reason, I prefer the ambient lighting option in Chroma. I’ve been using ambient lighting with my PC for some time, at first with an old Kickstarter called Lightpack, then expanded once Philips Hue added support.

Being able to add Govee to the mix was nice since I had set up the previous Glide Hexa panels nearby. It meant running another two apps in the background, but it’s possible to fold Hue and Nanoleaf into Chroma management if it all becomes too cumbersome. In terms of PC sync quality, I’ve found Govee’s to be responsive, but jittery. When it comes to screen mirroring, you don’t want secondary lights reproducing exactly what’s on screen 1:1. Your display pixels are changing rapidly, and if your entire room’s lights are changing colors and brightness at the same frequency, you’ll be on a first-class trip to Seizureville. Chroma does have a slider to increase the “fuzziness” of this reproduction, but I found even at its top end, the lights were regularly flickering trying to figure out what to reproduce. In one of my tests, I had bumped into an awkward spot where bright blues and yellows on-screen were averaged to a green on the Govee lights. Within Chroma, a series of Govee lights are positioned as a single entity, but I would love to see that get a bit more granular so that each tile could be managed separately. My Glide Hexa lights are set up in a horizontal strip beside the TV. If I could set a delay so that the tile nearest to the TV reacts first, then the next one, then the next, the lights would have a real nice outward emanation. If the tiles were in a vertical line next to the display, you could set separate mirroring zones so that the top of the strip would take colors from the top corner of the display, and the bottom of the strip from the bottom of the display. As it stands, all of the connected tiles simply reproduce the same color at the same time.

With Chroma dictating so much of this experience, it’s hard to put these shortcomings entirely in Govee’s lap. While having its own desktop app is a great first step, it would be ideal if Govee could bake ambient PC lighting in so Chroma doesn’t have to be involved. Govee’s mobile app is robust and on the verge of overwhelming, and I would love to see the same effort put into their new desktop counterpart if it meant smoother, native ambient PC lighting. Currently, Nanoleaf and Hue both do PC sync better.

In terms of overall color quality, Govee tends to go a little too far with its saturation. When I use Google Assistant to set a room’s lights to “candlelight” for example, the Philips Hue bulbs will produce a light, dim yellow. Meanwhile, the Govee tiles will go for a deep orange. As mentioned, the maximum brightness is quite high, so even when you tell the Govee Glide Hexa Pro to go to 50% through a voice assistant, it will still be hella bright. This is only really a problem if you’re among the industriously dorky juggling multiple smart light brands in the same space. Those that are all-in with Govee can adjust their sensibilities accordingly.

The Glide Hexa Pro lights are a nice option for fleshing out Govee’s lineup of wall tiles. Though lacking the modularity and selection of Nanoleaf, and the smooth software experience of Philips Hue, the sheer volume of animation options available with Govee is staggering. The Glide Hexa Pro tacks on a few more animation features that accentuate their cube-like appearance, and a new partnership with Razer adds much-needed ambient PC lighting. Maintaining hardware-based music sync where other players have eschewed it cements Govee’s spot among the best in the industry. Small niggles like oversaturation, high brightness, and a bulky power supply do little to detract from the sheer novelty of the Govee Glide Hexa Pro light panels.

The added 3D texture of the Glide Hexa Pro over the original is nice, but I wager for most people it’s not worth the extra $50. The standard Glide Hexa light panels afford all of the same features with roughly the equivalent experience.

LED light bulbs have very long lifespans, and use very little power. You can expect many years out of these lights. Odds are the software will stop working before the bulbs themselves do, but luckily hardware controls will keep them useful. Govee offers a one-year warranty on the Glide Hexa Pro.

The Govee Glide Hexa Pro light tiles are a safe buy. They’re fun, easy to install, and look great. It’s a little harder to justify them as practical lights compared to smart light bulbs, but if you have the budget for something just for the pure cool factor, these are great.