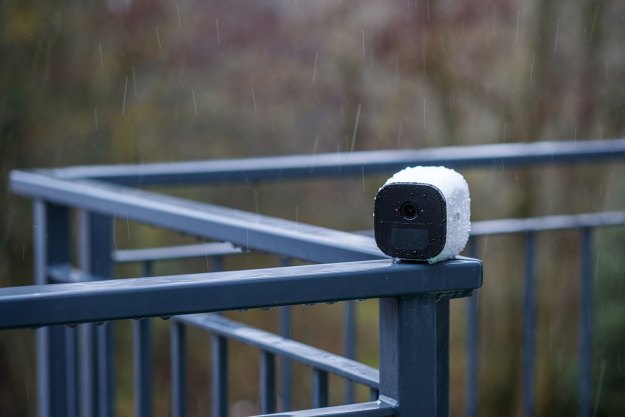 “The Arlo Go lets you take the impressive Arlo Pro anywhere you go.”

We’re pretty big fans of Netgear’s Arlo smart cameras. The Arlo Pro 2 is the best, most full-featured home security system we’ve ever reviewed, and the Arlo Go takes nearly all of that functionality and combines it with 4G LTE connectivity. Without relying on Wi-Fi, the battery-powered Arlo Go can be used in remote locations, to watch over both commercial and residential property where Wi-Fi doesn’t reach.

The Arlo Go doesn’t require an Arlo base station and, unlike the Arlo Pro 2, can be purchased as a single camera for $430 (MSRP). At that price, it comes in just $45 below the cost of an Arlo Pro 2 two-camera kit, but it requires a paid cellular plan. Therefore, it will only appeal to users who really need the flexibility of 4G coverage, but it’s a fantastic smart camera for those situations, with a wealth of features that many Wi-Fi cameras don’t even get right.

The Arlo Go is essentially a 4G version of the original Arlo Pro, so video resolution comes in at 720p rather than the 1080p of the Arlo Pro 2. However, as we’ve pointed out in previous smart camera reviews, the difference between these two high definition resolutions is minimal, at best, so we don’t see this as a knock against the Arlo Go. Image quality is affected more by the level of compression, which does appear pretty extreme here, but that tends to be true of smart security cameras, in general.

Without a base station, the Arlo Go doesn’t have access to features like the siren or optional USB backup that comes with Arlo Pro kits. However, Netgear did grace the camera with a MicroSD card slot, so there’s still an option for local storage. Given the intended use of the Arlo Go as a remote camera, this might not be the most efficient solution, but at a time when companies seem hell-bent on forcing users into more expensive cloud plans, it’s still nice to have. Other features include night vision, two-way audio, and motion and sound detection.

Without relying on Wi-Fi, the battery-powered Arlo Go can be used in remote locations.

Controlling the Arlo Go is done via the Arlo mobile app (iOS and Android), which is great if you own additional Arlo products. The Arlo Go will show up right in line with any Arlo Pro cameras, for example, and there’s no difference in how you interact with any of them. You can view a live feed, activate two-way audio, or review any clips from motion-triggered events. Netgear’s best-in-class geofencing and scheduling options work with the Arlo Go, too. It’s not the easiest to navigate app we’ve used, but it is the most powerful.

The mobile data connection does mean the Arlo Go won’t achieve the same battery life as the Arlo Pro, but it should still be good for a couple of months or so, depending on activity. Batteries can be swapped and charged separately, so it’s a good idea to purchase a spare to keep on hand in order to minimize camera downtime.

Making sense of the service plans

In order to get the Arlo Go online, you’ll need a mobile data plan. Netgear sells three versions of the Arlo Go for different providers: AT&T, Verizon, and Netgear’s own Arlo Mobile (tested). Additionally, a cloud storage plan is required, but as with other Arlo cameras, seven days of free cloud backup comes standard.

Fortunately, Arlo Mobile plans start at just $49 per year (or $5 per month). Due to the cost of streaming data over a mobile network, however, there are strict limits on how much data can be used. While a Wi-Fi Arlo camera can maintain an up-to-date buffer of video in the cloud, replacing old clips as new ones are recorded, the Arlo Go can only stream so many minutes per month, starting at 15 for the entry-level plan.

The Arlo cameras put powerful security tools in your hands, and the Arlo Go takes it to a new level.

Now, depending on where your camera is placed and how it is set up — for example, if it is scheduled to only be active at certain times or on certain days — 15 minutes may be more than enough. Cameras that are armed around the clock, or located in areas that see a lot of traffic — your family members coming and going, workers on job site, or those deer that keeps eating out of your garden — may require more time. Netgear offers 120 and 240-minute plans for $229 per year and $329 per year, respectively. Apparently, Netgear assumes users will either need a few minutes or many, as there is no option between 15 and 120 minutes.

Beyond a limited number of minutes, individual clips are always saved at 10 seconds — regardless of how long the motion event takes place. In our testing, walking around in front of the camera for longer than ten seconds resulted in brief gaps between the end of one clip and the start of another. This likely isn’t a huge deal, but compared to the impressively long clips of the Arlo Pro 2 (which lasted up to several minutes), we’re a bit underwhelmed.

Netgear’s Arlo cameras have always put powerful security tools in the hands of DIY-ers, and the Arlo Go takes this to a new level. It certainly isn’t a product that everyone will need, but it could be the perfect product for specific customers. If you have a barn, carport, or simply open land that falls outside of your Wi-Fi coverage, the Arlo Go gives you an incredibly easy-to-use solution for monitoring it. Likewise, it’s a great option for commercial applications, particularly when security is needed on a temporary basis, such as a construction site. The Arlo Go can be installed quickly, and can be uninstalled just as quickly when the job is complete.

At $430 (plus at least $49 per year) for a single camera, it doesn’t come cheap, so the Arlo Go isn’t going to be an impulse buy. In some cases, it may be possible to invest in better Wi-Fi to extend the reach of your home network — say, if you want to put a security camera in your garage — which could be more cost effective than a 4G smart camera. But when Wi-Fi simply isn’t an option, the Arlo Go is a viable choice.