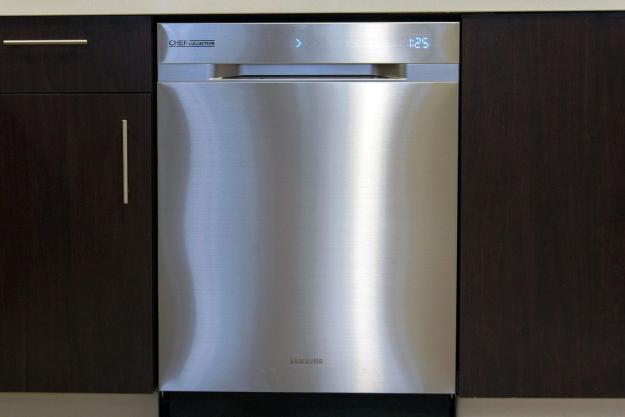 Recently, a study came out in which the authors outlined the best way to load the appliance and explained that their spray arms should be redesigned to get dishes cleaner. Timing is everything, because we were right in the middle of reviewing the Samsung Chef Collection Dishwasher, which boasts a unique feature that does away with the arm in favor of its WaterWall technology.

At $1,599, the DW80H9970US is definitely high-end. Samsung collaborated with chefs working in Michelin-star restaurants for its Chef Collection, the idea being that people who spend all day in the kitchen probably have some insight into what makes a quality appliance.

Do chefs know as much about cleaning dishes as they do about preparing them? Maybe Samsung should have consulted some busboys when it came to designing a dishwasher. As we found out, this high-end dishwasher looks a lot better than it performs.

Anyway you want it

Before you can run the dishwasher, you have to load it, and that’s one task Samsung makes easy in this model thanks to a variety of customizable racks.

Big enough to hold 12 plate settings, the dishwasher also includes a third rack meant for silverware and cooking utensils. It includes a FlexTray, which is a rubber mat that makes it easy to scoop up all the silverware at once and carry it to the drawer — provided you don’t forget you loaded the third tray, as many staffers did. You can take the whole rack out if you need more room, and raise and lower the second rack, depending on the height of the pots and pans you have in the lower rack. Many of the tines are adjustable to different angles, too. Taken together, all these features make the DW80H9970US pretty customizable.

What’s going on in there?

This washer gives you five cycles to choose from, including Auto, Normal, Heavy, Delicate, and Express 60’. The Auto cycle determines how dirty the dishes are and choose the best cycle itself; it’s cool technology, but probably not something most people will use often. After all, you probably just loaded the dishwasher and know the grossness level of your plates and cups. If the dishwasher turns off before you hit start, it does recall the settings you keyed in last.

The dishwasher can confine its cleaning to just the upper or lower rack, using less resources and taking less time.

We’ve seen many modern dishwashers with hidden control panels that leave you clueless as to what’s going on inside, because the display is hidden at the top of the door. Samsung’s Chef Collection cleverly adds an LED display on the outside of the door, too. In addition to the time remaining in the cycle, three arrows indicate where in the process you are: wash, rinse, or dry. If all three arrows are illuminated, it’s drying the dishes and there’s no point in sticking in that stray cup that was hiding out on the nightstand.

Not that you can trust the timer for much of anything. The regular cycle finished in just under two hours, though the timer started counting down from two hours and 24 minutes. Meanwhile, the Express 60’ cycle took 17 minutes longer than its promised one hour.

There are all sorts of other buttons included on the panel as well. The Zone Booster options crank up the power during the wash cycle. If only one pot is badly soiled, the Zone Booster can be localized to either the left or right side of the lower rack; selecting both Boosters supplies more power to both sides. Obviously, these add-ons take more time, water, and power.

However, this washer also has a few options that are more energy-efficient. In the office, we often have an upper rack full of mugs and nothing in the lower rack. Instead of waiting to fill the bottom, you can confine cleaning to just the upper or lower rack, using less resources and taking less time. Of course, because the Normal cycle was actually taking about two hours, the same as just doing the upper and lower separately, the time wasn’t actually any shorter.

With all these options on the control panel, first-time users could be a little confused. It was easy enough to select the “Normal” option and hit start, but taking advantage of the more advanced features required spending some time with the manual. A few staffers kept managing to accidentally set the “Delay Start” option, too.

One thing that left some of us baffled was the seeming lack of a feature: the pre-wash tray. In many dishwashers, there’s an extra, open slot next to the detergent dispenser. An extra couple squirts of liquid or shakes of powder provides detergent for the prewash cycle that comes before the main event. The Chef Collection dishwasher lacks this second tray, and the manual recommends just squirting the detergent directly onto the door. It was fine when we used liquid but a bit awkward with powder. Also, some staffers just assumed there was no need for the extra detergent and skipped this step.

Is your dishwasher running?

When everything was firing on all cylinders, the Chef Collection dishwasher hummed along without actually humming at all. It was so quiet that during the first week, staffers would stand around after starting it, waiting to see if it was actually working. Luckily, the attractive, light-blue LED display showed the time remaining in the cycle ticking down. In addition to its near silence, there was another reason we weren’t sure if the dishwasher was running: Its door kept popping open and stopping the cycle.

The problem was fixed once the machine was perfectly level, but the door’s latching mechanism seemed a bit finicky. There was no real satisfactory sound or feel to indicate the door was securely shut. This was true even when the door stayed closed through the entire cycle.

And after all, it’s a WaterWall

The new WaterWall tech inside Samsung’s dishwasher is pretty amazing. A nozzle at the top of the appliance spins like a traditional spray arm, but on the bottom of the machine, a second bar with jets moves from the front of the dishwasher to the back. It’s meant to supply water to every dish in every nook and cranny. In theory, the setup is ingenious. In practice, the dishes taking the full force of the spray ended up extremely clean. Crusted-on eggs and overcooked spaghetti sauce that had been left overnight vanished almost without a trace. Even the Express cycle proved powerful enough to dislodge the majority of the stuck-on food. But not everything got the same rock-star treatment.

A few spots just never seemed to get the full benefit of the WaterWall. For example, the glasses we put in the very front of the top rack, on both the left and the right, remained dirty during several cycles. It wasn’t as if they were untouched by the water, but they just didn’t get the same attention. Sometimes they also had residue from other dishes, as well. The top of the door also occasionally had food on it, which led to some confusion about whether the dishes had just gone through a cycle.

We were expecting miracles from the Samsung Chef Collection DW80H9970US. Its WaterWall technology seemed like it would guarantee sparkling dishes, free of foodstuffs, no matter how they were loaded. The premise is solid, but the execution needs a bit of work.

There are a few nice touches that prove why this is a high-end machine. Its front-of-door LED display is attractive and useful; the little jingle it plays at the cycles’ end is much preferred to irritating beeping; and the look, feel, and flexibility of its design put it well in line with the rest of Samsung’s Chef Collection. However, at the end of the day, what we want most is clean dishes and reliable function, and the DW80H9970US just didn’t consistently deliver that.