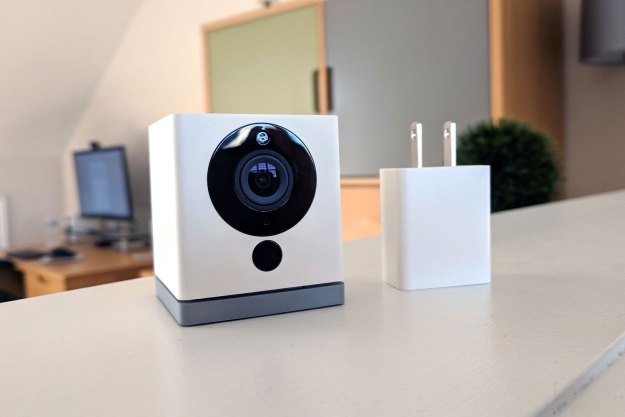 “The $20 WyzeCam v2 seems too good to be true, but performs where it counts.”

When a small parcel arrived containing our WyzeCam v2 review hardware, we could see that this $20 smart cam was both compact and low-cost.

You read that price tag correctly. In an age where smart home cameras can retail for well over $200, WyzeCam’s offering seems like witchcraft. With 1080p HD streaming, motion and sound detection, two-way audio, night vision and 14 days of free cloud storage, we could be reading the specifications of category heroes like Nest Cam IQ or Netgear Arlo. But for $20? We’ve got to be dreaming.

A quick pinch and a dig into that spec sheet reveals a couple of compromises, but nothing – on paper, at least – that rings an alarm. Sure, a 110 field of vision isn’t the widest you’ll find on the market, and 820.11n Wi-Fi (limited to the 2.4 GHz band) is a little slower than we’d like. But is that enough to break Wyze Labs’ promise of delivering high-quality products at a fraction of their competitor’s price?

Founded by a group of ex-Amazon executives from Seattle, it’s no surprise that the company has been built on a platform of delivering eye-wateringly good value. At first glance, it’s clear they understand the need for quality as well as a low price point. Because while the dinky WyzeCam looks cute, it feels much better in the hand than we expected.

The cube-shaped camera is light, but molded around four sides, so it feels quite robust. Soft touch plastics and rounded corners ensure that no fingers will be sliced in-use. Lift the device from its base and WyzeCam reveals an integrated, posable stand that raises the camera’s height and supports angled views. Twist the camera body, and you’ll find it rotates almost 360 degrees on a desktop. Or, you can mount the camera on the wall with an included magnetic wall-plate. There’s no battery support, but the included 1.8m mini-USB power cable helps with high mounting – if you need longer, simply purchase a longer cable from your favorite electronics retailer and you’re good to go.

There are more stylish and robust cameras than WyzeCam around, for sure, but out of the box, WyzeCam is cute, compact and versatile. There’s a lot to love.

Setup was another area where we were looking for compromises. But again, we were thwarted. Other than a couple of minor language issues, we couldn’t find fault, as it was a quick and simple installation experience. Download the Wyze app, power on, enter Wi-Fi details, scan a QR code, and you’re done.  There was even a succinct guided tour of the app, which is friendly and super simple to use – in part because there are few bells and whistles on offer.

WyzeCam’s 1080p imaging is incredibly impressive, given its price point. It suffers from the same daylight overexposure issues we’ve encountered on most smart cams this year, but static images are clearer and sharper than our current budget favorites, the $149 Swann Smart Security Camera and $129 Honeywell Lyric C2. Low light and night vision performance was equally strong, with the camera providing good infrared illumination and delivering sharp, well-balanced images.

But there had to be a compromise somewhere in the WyzeCam, and it comes with motion. The camera does an excellent job of detecting and tracking motion in the room – you’ll see a green rectangle placed around any object, person (or in our case, a cat) moving within the camera’s view. But we found that the live stream’s image resolution simultaneously drops with the kind of blockiness you’d expect from watching Netflix over dial-up. The issue was also visible on recorded clips, suggesting a processing issue rather than a problem with WyzeCam’s network streaming capabilities.  That said, clips are still reasonably clear and watchable – they’re certainly of sufficient quality for security purposes – but it’s something you should be aware of before jumping in.

In an age where smart home cameras can retail for well over $200, WyzeCam’s offering smells like witchcraft.

More concerning, though, were WyzeCam’s usability and cloud service issues when motion or sounds alerts were triggered. First, the camera repeatedly failed to send promised push notifications to our phone throughout our tests. Digging into the app’s notifications panel, we could see that triggered events had been recorded to the cloud. But when we tried to view the recorded clip, we were told the file didn’t exist.

We were able to view clips a couple of hours later, so whether there was an issue with the cloud service or whether there’s a significant delay in uploading, processing, and then making clips available for review, who knows. It’s a moot point – any smart camera needs to provide instant alerts and make video available in a matter of seconds, and WyzeCam missed the mark. The device does support on-event and continuous recording to a local SD card, and we found this to be a much more reliable option for clip review.

While Wyze Labs also promote their camera’s ability to differentiate between smoke alarms, CO2 alarms and regular sounds, our tests saw the camera lump all detected sounds into a generic category. Rounding up remaining features, we find that two-way talk on most budget smart cams to be a functional and reasonably muffled affair. WyzeCam’s integrated microphone and speaker work fine, but do little to change our opinion.

Your $20 investment in WyzeCam is protected by a one-year limited warranty, covering you from defects in materials and workmanship.

While there’s work to do on supporting cloud services, from a hardware standpoint, the WyzeCam v2 is a complete revelation, setting a new standard for budget smart cams on both price and performance. There are faster, better, smarter, more attractive Wi-Fi cameras in the market for sure, but none of them stack up to WyzeCam on value for money. It looks and performs far better than anyone should expect for $20.

With the issues we encountered with WyzeCam’s cloud service, we would recommend the use of a microSD card which, ironically, may well cost you more than the camera itself. The failure of WyzeCam’s push notification service and delays in cloud recording availability mean that the camera may not offer reliability users demand to protect their homes. If Wyze Labs can resolve those problems, then they really will have created a $20 smart cam sensation. Witchcraft, indeed.

Wyze Labs is a start-up that’s done a fantastic job of launching (and revising) its debut model. We have absolutely no clue how they’ll make money selling a $20 smart cam with this kind of specification. Unless they have backers with deep pockets, our hunch is they’ll need to shift a lot of volume to keep the wheels spinning. But at such a low price point, you won’t lose too much if the company goes pop.

If you’ve yet to invest in a smart home camera, $20 won’t buy you state of the art, but it’ll get you a decent second best that puts some competitors to shame. The smart cam world just tipped over – jump in!