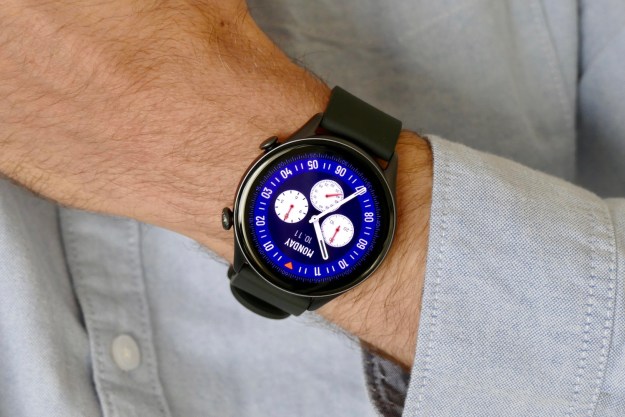 Want a smartwatch that works with either iOS or Android, has a very pretty design, is well-made, and has all the health tech you could want? That’s what the Amazfit GTR 3 Pro aims to offer, and after the success of the Amazfit GTR 2 smartwatch, we’ve got every confidence it can succeed.

However, that success hasn’t quite been realized yet. I’ve been wearing the new GTR 3 Pro ahead of release, and there are still some teething problems with the software and the prerelease beta app. For this reason, we won’t be fully reviewing the smartwatch until we can try out the publicly released app, and receive any update coming for the watch itself.

Consider this an in-depth hands-on based on about four days of use across both iOS and Android, with our final score and recommendations coming later. For now, we have entered a preliminary score of 6-out-of-10, but expect this to change after more comprehensive testing.

The Amazfit GTR 3 Pro is made from aluminum alloy with a 2.5D curved piece of tempered glass over the 1.45-inch screen, attached to a fluoroelastomer strap. It weighs 58 grams with the strap and is about 12mm thick, with a 45mm case diameter. There are two buttons on the side, set at 2 o’clock and 4 o’clock, with the top acting like a crown, so rotating it scrolls through menus. Press the bottom one, and you’re taken to the Workout menu by default, but this can be changed in the app.

It’s a very pretty smartwatch. There’s no pretense here. It doesn’t try to look like a chronograph or a diver’s watch, it doesn’t go overboard with unnecessary design flourishes, and it doesn’t needlessly increase the price by using materials like sapphire or titanium in an effort to be “premium.” Instead, you get a subtle, stylish smartwatch that makes no secret of being a smartwatch.

The GTR 3 Pro has has neatly worked itself into my everyday life so far, in terms of style and fit.

The 2.5D glass is smooth to the touch and easy to swipe on, and the rotating crown works well for zipping through the smartwatch’s vertically scrolling menus. The press action feels cheap, though, and it’s a shame the case back is made from plastic. The 22mm strap is attached using quick-release pins, making it slightly quicker to change out for an alternative.

I’ve found it comfortable to wear during the day, but have not tried it overnight yet. The strap is fluted underneath to help avoid it getting sweaty, and it has a pleasant diamond-like pattern and plenty of tightly packed holes for precise adjustment. The GTR 3 Pro has neatly worked itself into my everyday life so far, in terms of style and fit.

Amazfit has introduced a new version of its Zepp OS software for the GTR 3 Pro, but the software doesn’t appear to be completely ready yet, and that’s why I’ve held off on giving the GTR 3 Pro a full review and final score. I’ve been using the watch ahead of its release with a beta version of the app, and there have been a few problems. For example, notifications would not activate at all when paired with the beta app on iOS 15, but have been fine on Android. A few other odd things need fixing, too. For example, when connected to my Android phone, the watch asks for a passcode when I take it off, despite the fact that I have not actually set one.

It’s also quite slow to react, especially when you press the crown, including when trying to wake the screen up when it’s in ambient mode and when trying to select different features from the cards. All of its issues could be cured with a software update, and aren’t unusual when testing a new device ahead of its final release. I’m not going to judge the GTR 3 Pro’s software harshly yet, and will wait to use it with the final, publicly available app before completing this review.

There are still some things worth mentioning, though. The smartwatch has many features switched off by default, presumably in an effort to maximize battery life (or, depending on how you see it, for Amazfit to meet its own claims of how long the battery will last), and these include vibration alerts, the always-on screen, raise-to-wake, and all the automatic health sensor features. To get the most from the smartwatch, you’ll need all or most of these switched on, and you have to do so manually.

This is frustrating as it involves digging through the settings inside the app. Having everything turned on should be the default as it showcases how the smartwatch actually benefits you, rather than making it a silent partner on your wrist so it has a better chance of reaching bold claims about 12 days of battery use.

Let’s do some positives. It’s attractively designed, the fonts are clear and easy to read, there are tons of watch faces to choose from, and the cards accessed from left to right from the main dial are informative. As just hinted at, notifications are presented as little cards and they look great, but you can’t interact with them outside of deleting them, an action that’s at least then mirrored on your phone. Amazon Alexa is installed for assistant duties when the watch is online. However, at the moment the software’s poor speed and responsiveness blunts it, and it’s something I hope will improve following final software release.

Probably the standout new feature is One Tap Measuring. Select this and in 45 seconds the watch will measure heart rate, blood oxygen, stress, and breath rate all in one go. The data is presented at a glance immediately after the test has run, but unfortunately, it’s not available again if you leave the screen or the watch goes to sleep, forcing you to either do another test or go to the individual apps in the main menu. It seems like a wasted opportunity not to make this a dedicated card somewhere.

After tracking a workout, another issue with the software was revealed, as the smartwatch refused to sync the data to the app. It obstinately tells you the record hasn’t been synced, but provides no advice to change this. I did find the workout display clear and easy to read while on the move, but the software’s slowness did mean I thought I’d started to track my walk, only to find out halfway through that it hadn’t actually recognized the input.

I’ve used the Amazfit GTR 3 Pro for about four days and synced it with both an iPhone 13 Pro and a Nokia G50. Without the automatic health-tracking features active, but with the always-on screen and notifications activated, the battery has so far reached 60%. This suggests it will fall short of the 12 days of “normal” use estimate provided by Amazfit, but slightly exceed the six days of “heavy” use the company indicates is possible.

The GTR 3 Pro is the top model in Amazfit’s new range, and it’s joined by two others, the GTR 3 and GTS 3. The GTR 3 is another round smartwatch, but with a 1.39-inch screen and a battery that’s claimed to last about 10 days with heavy use. The GTS 3 is a square smartwatch has a 1.75-inch screen, a very slim 8.9mm case, and a battery that’s expected to last for about six days of heavy use.

The Amazfit GTR 3 Pro costs $230, while the GTR 3 and GTS 3 cost $180. The smartwatch will be available in the U.S., U.K, and parts of Europe through Amazfit’s own online store, and through Amazon.

This is a review on progress, so at this point, we can’t make a recommendation of whether you should buy the Amazfit GTR 3 Pro or not. The software and app are the problems at the moment, but the issues I’ve discovered so far could all realistically be solved with an update. Remember, I am using the smartwatch ahead of release, and with beta software.

The positive news is the hardware is very good. I really like the design and the low weight, which makes it wearable each day and with almost any outfit, too. The screen is really bright and very detailed, making menus and workout information easy to read whatever the conditions, and I love the way the always-on watch faces blend into the inky blackness of the display.

Remember, I am using the smartwatch ahead of release, and with beta software.

I was a fan of the Amazfit GTR 2 and the even cheaper GTR 2e, and am hopeful Amazfit updates the software very quickly to unlock the potential of the new GTR 3 Pro. One important thing to note is that the GTR 2e was a great buy, and this experience suggests you could probably get away with eventually buying the cheaper GTR 3 and not the GTR 3 Pro, and likely have almost the same ownership experience.

That’s something to think about once our full review has been completed. For now, take a look at our list of the best smartwatches you can buy if you can’t wait to grab yourself a new model.

Video-editing app LumaFusion to get a Galaxy Tab S8 launch
Best smartwatch deals for September 2022
Best Apple deals and sales for September 2022
The iPhone 14 gets a stunning transparent back with this new mod
Hey look, the iPhone’s Dynamic Island has come to … Android?!?
Amazon’s new Fire HD 8 tablets run faster, last longer, and start at $100
Samsung Galaxy S22 buying guide: everything you need to know
Watch the iPhone 14’s car crash detection get put to the test
How to add widgets to your iPhone lock screen on iOS 16
When is my phone getting Android 13? Google, Samsung, OnePlus, and more
Everything (and we mean everything) to know about 5G on the iPhone
OnePlus 11 Pro leaked specs predict a zooming disappointment
How to turn off your iPhone 14 Pro’s always-on display