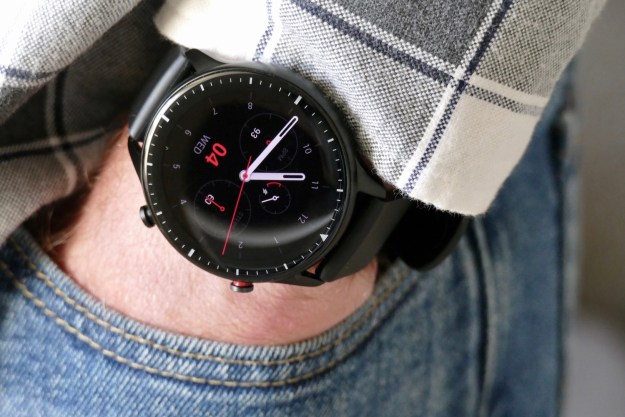 “Pretty and speedy, but happily not very spendy, the Amazfit GTR 2 smartwatch has the looks and ability to take on more expensive activity trackers from the big names.”

It would be difficult for any smartwatch to displace the top-of-the-line Apple Watch Series 6 from my wrist, but that’s what the Amazfit GTR 2 did, and it has remained there for more than a week now. It costs $179, half of what a Series 6 will set you back, which looks like great value, but the brand has a spotty history with its software that made me very wary.

My fears were unfounded, as it turns out that the Amazfit GTR 2 may be one of the best budget smartwatch buys of the year.

There are two new Amazfit smartwatches, the GTR 2 and GTS 2. I’ve been wearing the round GTR 2, which looks considerably better than the square, Apple Watch-like GTS 2. I assume Amazfit keeps it in the range because its smaller size may suit smaller wrists better than the GTR 2, but I think the diminutive style hurts both it and the Amazfit lineup. The GTR 2 is my pick of the pair.

The GTR 2’s round, lightweight aluminum case is perfectly judged in terms of design and feel. It’s just 10mm thick, the aluminum is attached to a plastic case back, and the glass over the screen has a subtle curve that blends in with the case itself, making swiping comfortable and quick. It’s attached to a quick-release silicone strap that’s soft and doesn’t get hot and sweaty. There are two buttons, the top emblazoned with a sporty red stripe, which have a pleasing motion when pressed.

I’ve worn the GTR 2 all day and night and it has not caused any discomfort. Returning to the glass, it’s the shape that gives the GTR 2 some class, as the curve catches the light in a way that makes it appear considerably more domed than it actually is. Under the glass is a 1.39-inch AMOLED screen with a 454 x 454 pixel resolution, and it’s as sharp and colorful as those specs suggest. It’s quite “deep” under the tempered glass, meaning in certain light conditions, the bezel is obvious.

While I’d like some alternative colors apart from black, the GTR 2 is a brilliant-looking, well-made, comfortable smartwatch.

This is where Amazfit has made the most strides forward, and is especially evident when we compare the GTR 2 to the company’s previous smartwatches. The rugged Amazfit T Rex and the Amazfit GTS were awkward and laborious to set up, the user interface (UI) was inconsistent and often not intuitive, and I had problems with notifications and usability. The software was a major downside, and when a smartwatch is difficult or frustrating to use, it quickly gets forgotten.

Things are much better on the GTR 2. Amazfit has rebranded its companion app, now called Zepp, and it’s better-looking, more informative, and more reliable. It’s available for iOS and Android, and I’ve been using it on an Android phone. On the watchm things are quite similar to before but with greater speed and increased usability due to some general user interface improvements.

A good example of how things have been improved is the way you change watch faces. Before, these were synced from the accompanying app, a process that could take several minutes. Now, it’s performed instantly in the same way as on an Apple Watch or Wear OS watch, and many of the watch faces have customizable complications. There’s a new always-on screen and software updates are also much faster than before. Overall, the watch and app are solid improvements over previous efforts, and easy to live with each day.

Sadly, the notifications have not been drastically improved. While I have received more regular notifications on the GTR 2 than the Amazfit T Rex I used at the beginning of the year, you can’t interact with any of them, and the text displayed is often jumbled and misaligned. It could be a lot better, but what’s there is manageable provided your expectations are low. Back on the positive side, the GTR 2’s software is pleasingly responsive, lowering frustration, while the menus and options are all clearly shown and sensibly spaced, making it easy to use on your wrist.

The Amazfit GTR 2 can also receive calls — the speaker is loud enough for callers to be heard indoors without a problem — and store music. While Amazfit’s software can’t challenge WatchOS 7 on the Apple Watch, and isn’t as mature-looking or as smooth as Wear OS, it does match other wearable platforms available, such as Huawei and Honor’s software, and Fitbit’s platform. What I require from software on a wearable is reliability, clarity, and simplicity of use, and the Amazfit GTR 2 delivers.

The Amazfit GTR 2 is a relatively basic activity tracker. There are 12 workout modes, including indoor and outdoor cycling, climbing, and swimming. Each does provide plenty of data, with cadence measurement on the treadmill, as well as pull speed and distance when swimming. The watch also has GPS for use when out running.

Recent activities are shown on the watch and also in the Zepp app, where you get the usual data — time, distance, and calories burn — plus further information from the heart rate sensor, with a breakdown showing time spent in fat burning, aerobic, and endurance zones. The watch also uses the Personal Activity Intelligence (PAI) metric, which helps you easily understand if you’re exercising enough.

The Amazfit GTR 2 has a heart rate sensor, a blood oxygen (Sp02) monitor, and a stress measurement too. The heart rate sensor matched results I obtained from my Apple Watch Series 6, but the Sp02 results always varied considerably. This isn’t evidence one is more accurate than the other, but more a statement about the usefulness and accuracy of blood oxygen measurements on your wrist in general.

The Sp02, heart rate, and stress measurement (worked out using the heart rate sensor) can all be performed automatically if you want, and are also used to track sleep. The GTR 2 is comfortable enough to be worn during the night, and the sleep data it provides is more comprehensive than that of the Apple Watch, and more closely associated to Huawei’s informative TruSleep system.

Problems? Some things from the old model still haven’t been fixed. The movement alerts don’t pay attention to what you’re doing — for example, it often told me to stand up and move around when I was driving. And I did notice some localization still needs to be done, as digging into the screens did reveal some Chinese language still in place occasionally.  I’d have preferred a few more workout modes, rather than having to use the Free Training mode for yoga, for example.

The operation of the workout modes has been simplified, with a clear readout during the session and a swipe of the screen to end one. However, live reporting of data isn’t accurate, and lagged considerably when compared to an Apple Watch Series 6. It also appears that the GTR 2’s display isn’t updating as often as it should. For my basic workout and activity tracking needs, the GTR 2 worked very well, although it can’t compete with hardcore fitness smartwatches like the Suunto 7.

Amazfit says the 471mAh battery will typically last for 14 days between charges, but with the heart rate and SpO2 measurement automatically running, and the always-on screen active, this dropped to only eight days for me. The workouts I tracked did not use GPS, so expect a further hit if you use this function.

Charging from 10% to full took approximately two hours, and is performed using a magnetic connector that attaches to the back of the watch. It’s quite secure and shouldn’t slip off by accident.

The Amazfit GTR 2 costs $179 in the U.S.. In the U.K., it costs 159 British pounds. It’s available for pre-order now, with an expected release date of November 20. The model reviewed here is the Sport, and a Classic version with a stainless steel case and a leather strap is also available for $199. Amazfit provides a one-year warranty, as well as a 30-day satisfaction guarantee.

The Amazfit GTR 2’s $179 price is seriously tempting, and its design and functionality are far better than you may expect for the money. Amazfit has cured many of the software gremlins that made its older wearables unwearable, and given us a smart, classy, and well-made alternative to boring fitness bands and ugly smartwatches from the likes of Fitbit.

The Amazfit GTR’s $179 price is very competitive. If the Fitbit name is luring you, then the Fitbit Versa 3 watch costs $229, while a Fitbit Charge 4 fitness band costs from $149, and each performs best when you pay Fitbit’s $10 per month premium subscription. A basic Garmin Vivomove 3S costs $199, and it doesn’t have a full touchscreen. The GTR 2 is better value than these examples.

Our recommendation is to spend a little more and get a better all-around smartwatch experience. Apple still sells the Apple Watch Series 3, which starts at $199, and it holds its own admirably against the much more expensive Apple Watch SE. There are some great deals around at the moment on the Samsung Galaxy Watch Active 2, which can be found for $179 and up. Both are older models, but the overall software and ownership experience is better than the Amazfit GTR 2.

This isn’t a rugged watch, but the tempered glass should keep it safe if it’s treated well. It’s water resistant to 50 meters and is suitable to wear when swimming. The 22mm strap has quick-release pins, so it’s easily changed if it breaks or gets grubby in the future.

The length of time it will last will mostly be affected by software updates on the watch, as well as the app itself. There’s no reason to expect these to dry up yet, though, and my review watch has already received one update. Another is expected in the near future, which will add Amazon Alexa support. Unless you get bored of the design, the GTR 2 should last for a couple of years at least.

Yes, it’s much better than the low price and Amazfit’s previous smartwatches would have you believe.