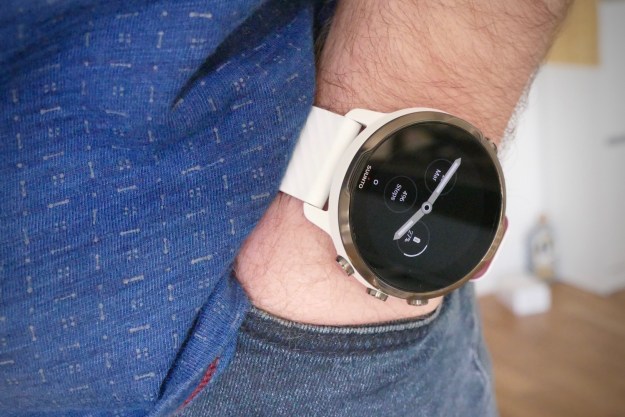 “The Suunto 7 gets battery life and performance right, but it's still not the best daily driver.”

Suunto, a Finnish activity brand, has a serious following among hardcore fitness fanatics. With the new Suunto 7 smartwatch, the company is now throwing a well-worn training shoe into the lucrative sports lifestyle world as well. The Suunto 7 is the company’s first smartwatch with Google’s WearOS platform, which increases its appeal. While the design will still entice the brand’s core fans, it’s less overtly sporty than some of Suunto’s other GPS fitness watches and trackers.

The Suunto 7 looks similar to the Suunto 9, released in 2018. It has a glass fiber-reinforced polyamide case, a stainless steel bezel, and a wonderfully soft and pliable silicone strap. There are four buttons on the case, each made from the same stainless steel as the bezel, and they’re large enough to access even when wearing gloves.

At 50mm, the watch is big on all wrists. However, at only 70 grams, it’s not heavy. It’s lighter than the Suunto 9, and a little heavier than the stainless steel Apple Watch Series 5.  A 1.4-inch AMOLED screen with 454 x 454 pixel resolution is set under a piece of Gorilla Glass. All of this makes the Suunto 7 a tough beast. The watch is shockproof, water-resistant to 50 meters, and the Gorilla Glass will keep the screen free from scratches. Suunto be pushing the lifestyle aspect, but don’t worry that the watch has gone soft, because the Suunto 7 feels plenty durable.

Is it fashionable? This is the hardest part for Suunto to get right. It’s been building GPS watches for ages, but none of them are watches I’d want to wear daily. The Suunto 7 is supposed to be different. So, did I want it on my wrist when I wasn’t exercising?

Yes, I did. My review watch came in a slick white and burgundy color combo, giving it an air of springtime cool. The light weight makes up for the overall size, but because it’s quite thick, it doesn’t fit under shirt sleeves easily.

The chunkiness does single it out as a sports watch. Many of Fossil’s fashion brand WearOS watches are slimmer, and at 15.6mm, the thick Suunto 7 is 5mm thicker than the Apple Watch Series 5. However, it’s not trying to be an alternative to a Michael Kors or Kate Spade watch. It’s trying to become more useful and more palatable to wear daily. I think it succeeds.

This is the first time Suunto has used Google’s WearOS on a smartwatch. Previously, it used its own fitness software. The implementation is solid. It’s fast and smooth, something that’s rarely said about WearOS smartwatches, and didn’t frustrate under normal use.

Suunto has four buttons on the case to play with, which is unnecessary. The button in place of the crown, and the one below it, are customizable. By default, they’re linked to music playback and a timer, respectively. The button above the crown opens Suunto’s fitness app, and the button on the opposite side of the case is the menu or back key.

This is a frustrating setup. The menu button is the one you’ll press most, yet it’s the most awkward to get to, and you can’t remap the menu button to the normal position on the crown. Worse, there’s no rotating crown to make scrolling through WearOS’s many menus and screens a little more comfortable. It’s the touchscreen or nothing.

Otherwise, WearOS operates as you’d expect. Swipe up for notifications, left for Google Fit, right for Google Assistant, and down for the control panel. There’s a small selection of watch faces, most of which are uninspiring, apart from one based on Suunto’s Heat Map running route planner. This shows popular trails nearby and looks cool, provided there’s nearby activity. It can be set to show a variety of other activities, too.

Some problems common to WearOS can be found here. Notifications are a pain, or more specifically, notification alerts are a pain. I like the way you can interact with information that comes from your phone, including the canned responses to messages, the chance to read and reply to emails, and the  bility to quickly see information at a glance. But WearOS continuously reminded me of the same notifications over and over again. It will do so until they are dismissed on the phone or the list on the watch is cleared.

I prefer to run the watch without additional apps, which helps performance. However, they can be installed through Google Play. Spotify is a popular download, and it works well on WearOS, providing complete control over your music. It’s fast enough when the watch is connected to Wi-Fi, but does slow down a little when connected to your phone. It’s representative of all apps on WearOS —  it’s functional, but not amazing.

Suunto’s fitness app is accessed through the button on the top right, and contains more than 70 different sports-tracking modes. Some options include walking, running, cycling, swimming, boxing, and horseback riding. It connects to Google Fit, Strava, and Endomondo, plus has its own GPS and mapping system. The maps show popular and not-so-popular walking, running, and hiking routes.

Sadly, this is difficult to test out when the current advice is to stay indoors. Still, I did manage to get in a few visits to the gym, as well as a walk, before that happened.

The fitness app is easy to use. Just select your sport and swipe to start. I instinctively wanted to use the touchscreen to stop the workout at the end, but that can only be done using the physical buttons. It’s a shame there’s no option for both.

The data on display is comprehensive, showing heart rate and heart rate zones, time elapsed, calories, peak training effect (PTE), excess post-exercise oxygen consumption (EPOC) data, and recovery time. When you’re walking, you have access to distance, pace, cadence, altitude, descent, and lap data. It’s comprehensive, clearly shown on the screen, and relatively accessible to the newcomer. This is important, as too much information will reduce the appeal of the Suunto 7 to non-hardcore fitness fans.

However, much of what makes the Suunto platform so enticing will only appeal to people who are deeply into fitness. Exploring local routes will be most useful to people who are away from home and still keen to get out and run, while the social aspect connects you to other Suunto owners who push themselves hard. Some of the openly shared activities inside the Suunto app are way beyond my admittedly modest athletic abilities, which kept me from sharing my feeble 50-minute local walk. The Suunto 7 may be less hardcore than previous Suunto watches, but the people who use the platform regularly haven’t changed.

Amazingly, given how woeful WearOS battery life can be, the Suunto 7’s battery is solid. With one workout per day of around an hour, the Suunto 7’s 450mAh battery lost about 50% of its capacity with the ambient screen switched on. That means it’s realistic to get two days of use from the watch, something easily achieved if you turn off the always-on screen.

Suunto has managed this through some interesting tech advancements it worked on with Qualcomm. A low-energy co-processor now deals with the fitness tracking, taking the strain off the Snapdragon 3100 platform and lowering power consumption.

Suunto says the watch will last for a full working day and still record a three-hour exercise session on a single charge. That seems achievable. The battery is charged by a plastic, magnetic plinth that attaches to the back of the watch. It’s proprietary, so don’t lose it.

Overall performance is excellent. The tight relationship Suunto has with Qualcomm has paid dividends, as the smartwatch’s software is smooth and fluid, even when using apps like Spotify. The OLED screen is colorful, but no different from any other recent smartwatch I’ve used. Using the Suunto 7 every day is a comfortable, effortless, frustration-free experience, and that can be a rarity for WearOS watches.

The Suunto 7 is available to buy now from Suunto’s site and other retailers. It costs $500, or 430 British pounds in the U.K., and comes in a choice of five color schemes. It’s covered by a two-year warranty, but only a year for the battery and the strap. Since we’re talking about smartwatches, our best move would be to provide you with all Black Friday smartwatch deals, so that you can leverage the Black Friday discounts.

The Suunto 7 succeeds in two areas other WearOS watches often fail. It provides usable two-day battery life and good overall performance, but doesn’t quite manage to become a crowd-pleasing lifestyle smartwatch. That’s due to the design not holding universal appeal and the hyper-focused sports features being irrelevant to the casual fitness fan. The Suunto 7 isn’t as niche as the brand’s usual watches, but it’s still niche, and that has translated into a slight lack of focus.

It’s not often an Apple product ends up looking like a bargain, but the $400 Apple Watch Series 5 can be purchased for $100 less than the Suunto 7, and it’s still the best smartwatch you can buy. It will easily serve both casual and dedicated fitness fanatics. If you own an iPhone, it’s the smartwatch you want.

What if you want a lifestyle watch with sporting ability, rather than the other way around, and don’t own an iPhone? The Samsung Galaxy Watch Active 2 is excellent. It doesn’t run WearOS, relying instead on Samsung’s own Tizen software, and the fitness tracking is easy to use and comprehensive enough for most people. I also really like the Huawei Health platform, which connects to Huawei’s Watch GT2 or Honor’s MagicWatch 2, both of which cost less than half the Suunto 7 and are aimed at those who want casual fitness tracking.

Wearing the Suunto 7 reminded me of the Casio WSD-F30. It’s big and bold, has great battery life, and comes from a brand with a hardcore built-in audience. It even costs the same at $500, and is worth a look due to the more attractive design and exclusive apps designed for specific outdoor activities.

Smartwatches don’t need to be replaced as often as your phone. The technology doesn’t change quickly, so you can easily keep using the same one for several years before you even think about changing it for another. Even then, it will mostly be about the design rather than the functionality.

The Suunto 7 is also tough. The body is shock- and water-resistant and made from strong material. The screen is covered in Gorilla Glass for scratch protection. I’ve accidentally knocked mine against various objects, and it doesn’t show any sign of wear at all.

No. If you’ve been hankering after a Suunto sports smartwatch you can wear everyday, the Suunto 7 might fit your needs. However, if you own an iPhone, don’t live and breathe fitness, and haven’t heard of Suunto before, then the Apple Watch Series 5 does everything you could want and more — for less.