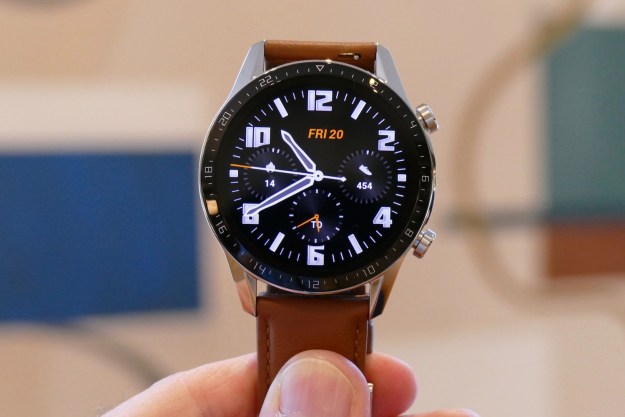 “The Huawei Watch GT2's classy vibe gives it an upmarket feel, but sluggish software may frustrate.”

Huawei has upped the class with its latest smartwatch, the Watch GT2, a sequel to the relatively ordinary Watch GT, and it has made a world of difference.

The software has improved too, but sadly it’s not a match for the design of the watch, and it still lags behind other smartwatch platforms. I’ve been wearing the Huawei Watch GT2 for some time, and here’s what it’s like.

The 3D effect refers to the slight angle where the screen cover becomes the bezel. It’s a classy, stylish, high-quality transition, and makes the Watch GT2 look great on the wrist.

It comes in two sizes, a 42mm Elegant model and a standard 46mm model, and I’ve been wearing the larger version. The AMOLED screen measures 1.39-inches and has a 454 x 454 pixel resolution, resulting in sharp, detailed text and colorful watch faces. The brown leather strap is supple out of the box, and a black silicone strap is included as an alternative. I also saw a Watch GT2 with a metal bracelet, which complemented the polished body well.

The body is slim at 12mm, lightweight, and fits comfortably. It looks great, avoiding a high-tech look and easily passing for a traditional watch if you don’t look too closely. The problem is with the watch face, which doesn’t always display the time, and defaults to a black screen after a set amount period. While this will conserve battery life, it’s annoying when you just want to glance at the time, and spoils the otherwise decidedly classic style.

Let down by software

While the hardware is desirable, the software lets the Watch GT2 down. Although Huawei has not stated what the operating system is on the watch, it’s likely to be a version of Lite OS, Huawei’s own software that also ran on the first Watch GT. Huawei has also hinted HarmonyOS would run on a future smartwatch, and the line between the two has blurred since code from Lite OS has been incorporated into HarmonyOS.

It’s a little slow, the transitions stutter, and the screen doesn’t always respond to touches. I’m trying an early version of the watch, so updates may arrive to fix these problems. The original Watch GT also suffered from similar problems, which were eventually (mostly) cured. Swiping through the menus, activated by pressing one of the side buttons, is too sludgy, and tapping an app or option does result in waiting a little too long.

Huawei has chosen the Watch GT2 to be its first wearable powered by the Kirin A1 processor, that’s the same chip in its forthcoming Freebuds 3 headphones, so its performance is untested. It does promise low power consumption though, and even with the GT2’s additional features over the first watch, Huawei claims two weeks from a single charge. That’s amazing for a full touchscreen smartwatch, especially with heart rate tracking and notifications active too, but I’ll need to test this claim to see if it’s accurate.

The notifications are hit-or-miss so far. The screen does not always light up when a notification arrives and doesn’t turn on when you raise your wrist either, forcing you to tap the screen to see what’s arrived. Even then, it’s confusing as to how to interact with the notification, which quite often just states the app name. The WhatsApp notifications seen in the photo above are representative of how most arrive, although sometimes it will show the entire message. The reason for the inconsistency is not clear at this early stage.

What’s good? There is a good selection of watch faces and several have informative complications. Fitness tracking has been enhanced, and now monitors 15 different activities — from swimming to rowing — plus there is sleep tracking on board too. This uses the heart rate monitor and artificial intelligence to provide sleep analysis and suggestions for improvement. Other health features include reminders to move about and step tracking.

The Watch GT2 is a comprehensive update over the first and includes the much needed addition of internal storage space for music, plus the ability to pair Bluetooth headphones. That means unlike the first model, the GT2 can be used at all times without the need to carry your phone, or to exercise in silence. The design is more upmarket than the first, and it’s a real pleasure to wear.

The release is currently set for some time in October, at which time it will go up against the $255 Fossil Sport and the $300 Samsung Galaxy Watch Active 2 — serious competition, in other words. It likely won’t be available in the U.S.