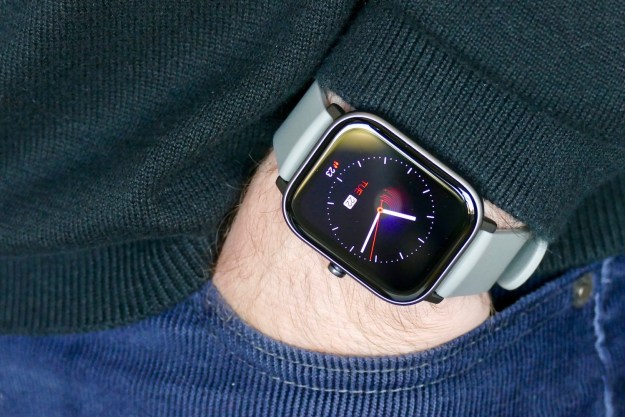 “The Amazfit GTS looks like an Apple Watch, but its software can't keep pace.”

I spent a short while with the Amazfit GTS during the IFA 2019 trade show, and my first impressions were good. Yes, it’s an obvious Apple Watch clone, but the materials and build quality were great, and the screen was a little beauty. It was my first exposure to anything made by Amazfit, a popular brand for those trawling Amazon for tech bargains, which I had approached with trepidation, fearing I’d be met with disappointment.

That first encounter led me to wear and use the Amazfit GTS for much longer, to see if it could elevate itself beyond being a cheap, cheerful, Apple Watch clone. In other words, the software would make-or-break the Amazfit GTS.

The GTS is a pleasant surprise. I think the Apple Watch’s design has become iconic, and while some still disagree about its style, it is distinctive and attractive, especially when paired with the right strap. Amazfit has not been subtle about its design choices, but has opted for a single crown on the right of the body to avoid potential lawsuits.

Yes, it looks like an Apple Watch, but it’s not some boring, low-budget clone. The metal body is really slim — slimmer than the Apple Watch Series 5 — and the metal itself has been given a wonderful tactile texture. A company representative told me this was to make the watch feel even more premium, and it works.

The case back is made of plastic and houses a heart rate sensor. The straps measure 20mm, and are a little small on bigger wrists. Amazfit has several colors, with the black-on-black model looking stealthily cool, and the red silicone strap standing out as the best alternative.

The GTS is comfortable to wear. It’s light at about 25 grams, slim to fit under your cuff, and the floppy silicone strap is smooth and never gets caught on wrist hairs. Wearing it while sleeping is no issue, and as the watch has sleep tracking, it can be worth doing.

It’s the screen that will really grab your attention. The 348 x 442 pixel AMOLED panel, though just 1.65-inches, is a beauty. Inky blacks and a well-designed operating system mean the display appears to lack borders, and cons are pin sharp due to the screen’s pixel density of 340 pixels per inch.

Brightness can run be turned extremely high if you switch off auto brightness, but auto brightness  works well enough that there’s no need to do so. Several dozen watch faces are available in the app, although many have a classic watch style that doesn’t really suit the GTS. Some of the more modern, quirky styles look better. An always-on display is an option, and the time, step count, day, and date are all shown. A raise-to-wake feature activates the main screen quickly and effectively.

Wearing the Amazfit GTS as a watch — a device that tells the time — is a great experience. The sleek style, cool metal case, and supreme comfort ensures it never becomes a burden, or something you can’t wait to remove.

While the Amazfit GTS looks great and works as a watch, its operating system is not without flaws.

First, the setup is such a mixed bag. Initial setup is easy. You create an account, then use your phone’s camera to scan a QR code. It worked perfectly with an Android phone and an iPhone 11 Pro.

However, several hours of updates followed. Downloads took ages, and transferring to the watch was so slow I thought several times that it had given up. Even swapping watch faces can take 30 seconds, so the pain continues when you customize the watch.

Once it’s on and working, the software is attractive and well designed. You’ll swipe through menus, and all icons are clearly labeled. It’s not rocketship fast, but it never becomes slow enough to be annoying.

Learning how to use the software is a different story. Starting a workout is easy, but finishing it is less so. You don’t swipe in a menu, or look for an on-screen button. Instead, you have to long press the crown itself to pause, then end the workout. The only other time the crown is used is to turn the watch on, that’s not intuitive.

I received some app notifications on iOS, but most were rubbish I’d never want to see, anyway. Changing settings, restarting the watch, and resetting the setup process had no effect. Notifications are an important part of smartwatch ownership. The Amazfit GTS didn’t pass.

The GTS comes with tracking for 12 different activities including running, cycling, skiing, and climbing, plus there is an open goal for general exercise. The watch is water resistant to 50 meters, and can be used when swimming or in rain and snow, but not for scuba diving. The screen shows calories burned, time elapsed, and heart rate when in fitness tracking mode.

Workouts are stored under an Activities menu, which shows some helpful data such as the amount of time your heart rate spent in different phases, and a graph showing how it changed. Further information can be found in the Amazfit app on your phone, along with the option to activate the GPS for tracking runs and cycle rides. It’s comprehensive and easy to read, but the information isn’t new or unusual.

I was frustrated to find the watch turned off the always-on screen when in activity tracking mode, and just left the screen black. It did control music on my iPhone, but I had to prompt it by opening the Music menu. I wore the Amazfit GTS alongside an Honor Band 5. Both were within a few beats of each other when measuring heart rate, and provided the same results as the heart rate monitor on a treadmill, too.

The watch will remind you to stand up, but it didn’t pay much attention to my activities. It often alerted me I need to stand up only moments after I sat down from a short walk.

There’s a 220mAh battery inside the GTS. Amazfit expects it to last for 14 days on a single charge. It connects to your phone with Bluetooth 5.0, and the Amazfit app is available for iOS and Android. With general use, I found the Amazfit GTS’s battery depleted by around 10% each day, making ten days more appropriate with a couple of one-hour workouts in the mix.

The Amazfit GTS costs 130 euros, or about $145. Amazfit told Digital Trends the watch will be available in the U.S. through amazon.com, but it is not for sale there yet. It is available through importers for between $150 to $180 depending on your choice of retailer.

Warranty covreage.will vary. If you wait and buy through Amazon, the warranty will be handled by the company; but if you import it will be the responsibility of the importer.

The Amazfit GTS is well made from quality materials, and I like the various colors available, the super slim design, and the comfort. It has solid fitness and activity tracking features, and the screen is bright and sharp enough to make viewing a pleasure. However, the notification support is unacceptable, the setup process too lengthy, the software a little buggy, and outside of the design the Amazfit GTS doesn’t offer anything over cheaper fitness bands.

Yes. For a start, if you think this is an Apple Watch alternative for your iPhone, think again — it doesn’t come anywhere close. The $400 Apple Watch Series 5 is the best smartwatch you can buy, and even if it means saving up for longer, you’re better off doing so and buying one than spending less on a cheap smartwatch.

I wore the Amazfit GTS alongside the Honor Band 5, which delivered all my notifications, tracked my workouts and activity, and looked decent too. Yet it costs 30 euros, or about $40. Both it and the very similar Xiaomi Mi Smart Band 4 are better purchases than the Amazfit GTS, as they offer essentially the same functionality for a lot less money. Just want to track steps? Casio’s $100 G-Shock GBA-800 and subsequent models do the job, with added style and toughness.

If you want a smartwatch rather than a fitness band, the Mobvoi Ticwatch E2 is $160 and comes with WearOS onboard and Google Fit support. The better looking Mobvoi Ticwatch C2 is $200. The $275 Fossil Sport can be found for a lot less if you shop around, and is attractive and lightweight. There’s also the $200 Fitbit Versa 2, and the $200 Withings Steel HR Sport too.

Also, whatever you do, don’t buy the Amazfit GTS and try to pass it off as an Apple Watch. Wear it with pride if you’re going to get one, not pretend it’s something it isn’t, even if the style does make it difficult.

The watch is water resistant and the case is made from metal and plastic, with glass over the screen — it will be durable enough provided you don’t go out of your way to damage it. Provided Amazfit continue supporting the watch with software updates, it certainly should last for some time. However, fashion changes in the watch world, and smartwatches are evolving even faster, so don’t be surprised if something new turns you head next year.

No. Until the software is fixed and notifications are delivered on both Android and iOS, you can do better for less money.