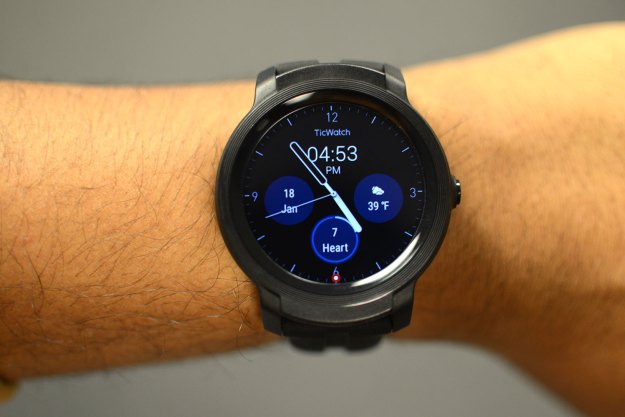 Smartwatches are getting more affordable, and Mobvoi is helping to lead the charge. The Chinese company is still relatively unknown, but has consistently produced budget smartwatches that are feature-packed for the price, even though they won’t win any beauty contest. The most affordable to date also happens to be Mobvoi’s latest, the TicWatch E2; at just $160, it’s hard to say no to this Wear OS watch that can (almost) do it all.

The TicWatch E2 is no showstopper. It’s a thick, simple-looking watch that won’t tug at heartstrings, but it’s not ugly or unpleasant. That’s unlike the TicWatch S2, the E2’s sportier and more durable twin, which has an unattractive design.

But while we like the E2’s design more, both look very masculine, and could benefit from a smaller-sized option (the current size is 46mm). The E2 looks comically large on slim wrists, and a part of that is due to its 12mm thickness. It’s to fit a larger battery, which we appreciate, but the chunkiness is still unappealing.

There are positives. The lugs (where the watch attaches to the bands) don’t jut out too much, and the bezel is raised from the display, meaning there’s less chance of seeing scratches or cracks on the glass covering the screen. It’s also lightweight, and the polycarbonate body feels more expensive than its price suggests. There’s a lined pattern surrounding the bezel that tends to attract dust and lint, though, so you’ll likely be cleaning the watch often.

The TicWatch E2 is no showstopper, but it’s not ugly or unpleasant.

The 22mm silicone strap picks up dust quite easily as well, but it’s comfortable to wear and pleasant to the touch. It has a high-quality feel, and is more than adequate for handling sweat during exercise. You may want to purchase another strap for more formal attire, but the jet-black look of the TicWatch E2 is good enough to go with most outfits. The strap is interchangeable, but the quick-release pins are tough to unfasten if you don’t have long nails.

The button on the right side of the watch is the only button, which is used to access the App Drawer, or you can press and hold it to trigger Google Assistant. We wish it jutted out a little more so it could be rotated to scroll through the Wear OS interface.

The 1.39-inch AMOLED screen is large, making it easy to read notifications at a quick glance. There’s no ambient light sensor, but we set the display to the level-two brightness (out of five), and had no issues seeing it in broad daylight. It’s colorful, and the blacks are so deep they blend into the bezel. Best of all, the screen has a 400 x 400 resolution, so content looks sharp. (For comparison, the premium 44mm Apple Watch Series 4’s 1.5-inch LTPO OLED Retina display has a 368 x 448 resolution).

We enjoyed our time wearing the TicWatch E2. The simple design didn’t put us off, though we can imagine it would easily be a dealbreaker for those with smaller wrists.

The TicWatch E2 is powered by Qualcomm’s Snapdragon Wear 2100 processor — which debuted in early 2016. It delivers decent performance, but the newer Wear 3100 processor arrived late 2018 and we’re disappointed it’s not being used here, as it delivers slightly improved battery life and fitness tracking. Mobvoi told Digital Trends the Wear 3100 chip needs to be optimized more, while using the Wear 2100 chip on the E2 helps keep costs down.

The TicWatch E2 feels fluid in most day-to-day tasks, but the occasional lag or stutter does crop up — such as when downloading apps, triggering Google Assistant, or responding to notifications. It’s nowhere near as speedy as the Apple Watch Series 4, but considering you’re simply looking at notifications most of the time, you likely won’t run into too many issues with performance.

The Wear OS interface, which Google recently redesigned, is easy to use. It’s swipe-based, so you swipe right, left, up, and down to access different menus. For example, you can swipe left from the main watch face to access TicHealth, which shows basic fitness statistics. If you don’t want to use Mobvoi’s app, you can swap it for Google Fit.

You can respond to notifications, talk to Google Assistant to control your smart home, see traffic alerts, measure your heart rate, and use the GPS to track distance. The only function the TicWatch E2 doesn’t offer — that most modern Wear OS watches do — is contactless payments with Google Pay. There’s no NFC to help facilitate this, and that’s because Mobvoi said its customers didn’t think of it as a priority. It also helps keep the watch a little thinner.

We like using mobile payment through smartwatches, and we see it as a useful benefit. However, at such a low price, we’re willing to give the TicWatch E2 a pass for not having this feature. Although we list it as a “low,” it’s not a deal breaker.

You can download music to the watch through Google Play Music, and while the method has improved, it’s still a painfully slow process to save a good deal of music. Spotify is now available on Wear OS, but it sadly only offers a way to browse through playlists and control playback.

The only software features that makes the TicWatch E2 stand out from other Wear OS watches are the pre-installed Mobvoi apps, of which there are quite a few. TicRanking lets you compare your fitness statistics with other TicWatch users in your area; TicPulse is what you use to track your heart rate; TicHealth shows general fitness stats and lets you see how far along you are to hitting daily goals; and TicExercise is a manual way of starting activity tracking — it supports running, walking, swimming, and cycling.

The data showed on the screen while tracking an activity is nicely laid out, and easy to see at a glance — that’s important when checking the watch in the middle of a run.

Its $160 price tag along with the features it offers is simply stunning value.

One of the TicWatch E2’s new features is TicMotion, which is Mobvoi’s take on using artificial intelligence to deliver stronger fitness tracking features. It starts with fully-automated activity recognition, which will detect whether you’re running or sleeping without requiring you to open any app. The automatic sleep tracking isn’t available yet, but we have yet to see the watch automatically detect us running. We have seen it successfully auto-pause activity tracking, however, when it detected we stopped moving for some time.

The second part of TicMotion is swim monitoring, with the ability to track stroke type, speed, and lap time. We haven’t had a chance to try this out yet. More TicMotion software features will be available over the coming months, including the ability to launch apps by flicking the watch away from you, so we will update our review after we our next round of testing, which will include swim monitoring and the new features.

The heart rate monitor is mostly accurate, delivering similar results as the Apple Watch Series 4 and manual readings. However, it’s not too reliable through the TicPulse app — the reading failed several times, asking us to adjust the watch’s placement. When it worked, it took a dreadfully long time. We used the Google Fit app instead to measure heart rate, and it worked without issue.

Like Apple and Fitbit watches and trackers, the TicWatch E2 also reminds you to move when it detects you have been active for some time. These notifications do not feel incessant, but genuinely helpful.

If you’re a fitness buff, the TicWatch E2 is not for you. You’re better off going with the Apple Watch Series 4, the Fitbit Charge 3, or perhaps a Garmin watch. For the more casual athlete, the TicWatch E2 delivers the basics, and not much else.

The TicWatch E2’s crowning feature is battery life. With the always-on display, we managed to squeeze more than a day’s worth of life from the 415mAh battery. We frequently arrived home with around 50 percent left around 7 p.m. That’s with using it for music playback and interacting with notifications.

It’s an even better story with the always-on screen turned off. With similar usage — plus a little activity tracking — we arrived home with around 63 percent by 7 p.m. We left the watch off the charger and found it had 38 percent by 9 a.m. the next morning, and after wearing it for most of the second day, it finally hit 15 percent by 4:15 p.m. That’s impressive, considering most Wear OS smartwatches would be dead in just about a full work day.

Mobvoi claims two-day battery life. It certainly can go past a day, but not two full days. Regardless, we’re quite happy with the TicWatch E2’s battery life as we’ve hardly had to worry about it dying on us. Other than the TicWatch Pro, it has the best battery life compared to any other Wear OS smartwatch. It still can’t beat the multi-day long battery on the Apple Watch, Fitbit Versa, and Samsung Galaxy Watch, though.

The Mobvoi TicWatch E2 is available now from Mobvoi’s website as well as Amazon, and it only costs $160, making it one of the most affordable Wear OS smartwatches on the market.

Mobvoi offers a standard one-year warranty on the watch, which is protected from manufacturer defects.

Mobvoi’s TicWatch E2 is the best affordable smartwatch you can buy, provided you don’t mind slapping a chunky watch on your wrist. Its $160 price tag, along with the features it offers, is simply a stunning value.

At the low price of $160? No. But there are plenty of other options for not much more money. Our favorite Wear OS smartwatch at the moment is the Fossil Sport, which utilizes the latest Wear 3100 processor for improved battery life and fitness tracking. It’s a little over $200, so it’s still quite affordable. It’s far thinner, and looks more attractive.

There’s also the Fitbit Versa, which costs $200, but it can deliver smartphone notifications, track your fitness, and last for a few days.

There’s also the Galaxy Watch if you have no preference of software on the watch. It works with both iOS and Android phones, has excellent battery life, and a fun way to navigate the interface.

If you’re an iOS user, you should go for the Apple Watch Series 4. It’s the best smartwatch for iPhones, and it is packed with a ton of life-changing features, though it does cost significantly more.

As we mentioned, if fitness tracking is your primary concern, the TicWatch E2 shouldn’t be your first choice.

Check out our guide to the best smartwatches for more.

Smartwatches in general have a short lifespan as the battery inside will start to deteriorate after the two-year mark, if not a little earlier. We expect the TicWatch E2 to last you just about two years, and you’ll likely want to upgrade at the time anyway considering the space is quickly evolving.

The TicWatch E2 is water resistant up to 5ATM, which means it can survive underwater up to 130 feet. You can go swimming with it, so don’t worry.

Yes. If you’re looking for an affordable smartwatch that can (almost) do it all, the TicWatch E2 is your best bet. That also heavily depends on whether you love or hate the design.