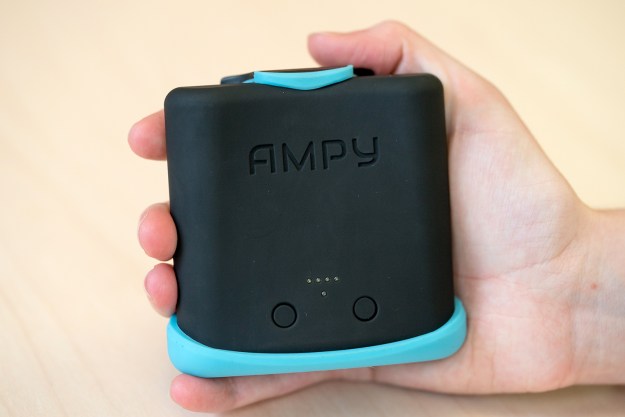 “Ampy Move is a poor replacement for a portable battery and too bulky to wear.”

Why don’t more kinetic chargers exist? They’ve been in watches for decades, after all, and as we continue to carry more and more battery-operated devices, there’s a genuine interest in charging these smartphones or wearables without relying on outlets. And unfortunately, battery packs are mostly half-steps to a solution.

That’s likely why Stryde Technologies’ Ampy Move was over-funded by nearly $200,000 during its Kickstarter campaign in late 2014. Some of the specs have since changed, but the basic functionality in the 1,800mAh wearable battery pack remains the same: It’s supposed to charge itself as you move, giving you both a backup charger and a functional step counter, all in one. The device gained media attention when the Kickstarter launched in late 2014, but after it began shipping and people started using it, few folks seemed to rave or even talk about it.

And that more or less lines up with my experience using the Ampy Move. But before we delve into the finer details, I want to make it clear that Ampy Move is a runner’s accessory. The company has dialed back some of its claims since the Kickstarter launch, but Ampy makes clear in its packaging that the device is intended to generate energy while exercising.

Out of the box you’ll feel like you have a proper product in your hands, and not something out of a Kickstarter project. The Ampy Move is well packaged, and the device itself feels solid and well-constructed. It has a pleasant, rubberized texture when you hold it in your hand and initially feels as though it has a nice weight (more on that later).

If you get the $130 Ampy Move Wearable Motion Charger and Accessory Kit version, you’ll also receive a Go-Clip and an adjustable sports band in the box. The former allows you to clip Ampy Move to your waist; the latter lets you attach it to your arm or leg when you’re heading out for a run or bike ride. Both felt comfortable enough while walking, though the strap can feel a little constraining after a while. I also didn’t have to worry about the battery pack flying out of the clip-on or strap, as it was fairly secure in place.

There’s also a nice looking USB connecting cable in the box to charge your smartphone with Ampy Move.

The device itself has two buttons on it. One lights up LEDs that show the current status of Ampy Move’s charge, and the other is more of a gimmick, displaying a blue light to show that Ampy Move is generating energy as you move, but you have to press and hold to see it.

There are two ports on the bottom – a Mini USB and a standard USB port to either charge the pack or a smartphone.

Ampy recommends fully charging the battery pack before taking it with you on the move. Thankfully, in my time using the device, I hardly noticed any discharge. Unfortunately, I didn’t see much charging going on either.

Ampy’s claim is that an hour of exercise will produce 1 hour of additional battery life for normal use on a smartphone, and up to 5 hours of standby time. To properly generate energy, an up and down motion is the most reliable method.

My Ampy was fully charged and showing four lights, but I went down to two LEDs as I used it to charge a 2014 Moto X. That brought my phone back up to around 40 percent before I unplugged it.

Ampy Move is well packaged and the device itself feels solid and well-constructed.

I walk around 8,000 steps on an average day, but Ampy’s LEDs didn’t seem to change. This was with the device strapped to my waist using the clip-on. In fact, I continued wearing it for three days and I saw no increase or decrease in the lights.

I plugged the device to charge my phone, and it did so slowly. I gained back about 15 percent before it went down to a single LED. Shaking the wearable back and forth for half an hour didn’t do much except wear me out.

I threw Ampy Move into my bag for about a week as I went about my business, only to find that nothing had changed. Tejas Shastry, co-founder of Stryde, told me that it would be fine to leave the device in my backpack and expect some gain in capacity, but he did warn me that this wasn’t the best way to recharge it.

I then tried doing what Ampy actually recommends – running for one to three hours. I used the sport strap to keep the device in place on my leg, and I jogged for about an hour until I saw one LED light back up. The strap wasn’t the most comfortable thing to wear when I was running, but it looks like it did the job.

The Ampy Move also has a companion app you can use that doesn’t require any special connection. Ampy+ is available for iOS and Android devices, and it acts like a basic fitness tracker, measuring your steps, calories burned, and how much battery life you have generated. It also shows you how many hours of battery life you have left on your smartphone, and what each LED on Ampy Move offers in terms of additional charge.

I didn’t find the app to be useful at all, and I preferred my own fitness tracking apps to Ampy’s. The app was sluggish (on Android at least), it didn’t have the best interface, and since it didn’t actually offer any valuable information from my Ampy Move device, I never needed to open it.

Ampy has a limited warranty, meaning if your device has any defects, you’re allowed to return it for repair or a replacement within one year from the date of purchase. That extends to an additional year if you bought the device in the European Economic Area.

The Ampy Move doesn’t work well as a self-charging phone charger or a Fitbit-like step counter.

I managed to top off my smartphone with Ampy Move once or twice, but not too long after, I forgot that I had it on me. It was too much effort to carry the wearable with its Go-Clip and strap, all for a little extra top-off juice. It was an additional hassle in my day, and I felt more comfortable using the slim 20,000mAh battery pack I keep in my backpack to top off my smartphone.

Do I dislike it because I don’t fancy myself a runner? Maybe. It may be worth taking a look if you exercise frequently and are interested in generating clean energy. But chances are you already have a fitness tracker on your wrist, your phone strapped to your arm for music, and earbuds dangling from your ears while you run. It’s inconvenient to add a bulkier battery pack to your leg or arm for a little extra power.

Ampy Move can be useful in certain situations, like when you go hiking and you’re nowhere near a power source. You should be able to generate enough power based on the amount of time you’re out and about to use Ampy Move as an emergency power bank.

Despite that, the biggest turn off is likely the price. $100 for just the wearable is way too much for a small battery capacity, and it takes a lot of effort to recharge it. Not to mention that if you’re considering it, you likely have to get the $130 accessory kit version so you can actually strap the device onto yourself before you run. It’s incredibly odd and confusing that accessories that would help you use the wearable are not included in the base purchase of Ampy Move itself. Why?

The folks at Stryde did let me know that a new version is expected very soon, likely in the next few months, and it’s supposed to be smaller, sleeker, and have a larger battery capacity.

Personally, I would rather wait until the technology has developed enough that it can be integrated into our smartphones and wearables themselves – that way they can recharge themselves ever so slightly while on standby mode as you move. Sadly, that perfect power solution remains just a dream.