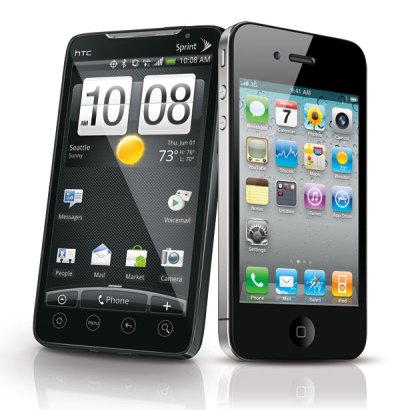 With the curtain now officially lifted on Apple’s iPhone 4, hoards of Apple devotees have already made plans to ditch their well-worn 3G S models and move onto the next iteration. But if you’re not wearing a heart-shaped locket with Steve Jobs inside, does the move to the iPhone 4 make sense? Where previous iPhone releases have towered over the competition in every way, this year’s release faces stiffer outside competition than ever before. Does Apple still have what it takes to reign supreme in the smartphone market? We stacked the iPhone 4 specs side by side with those of its most intimidating competitor, HTC’s Android-powered EVO 4G, to find out.

With this year’s Android offerings moving to ever higher resolutions and screen sizes, it was clear that the iPhone would need a major overhaul to compete. And Apple provided it. The 3.5-inch, 960-by-640-pixel LCD screen on the iPhone 4 quadruples the amount of pixels from the last-gen screen to 614,400. By contrast, the 4.3-inch screen on the HTC EVO 4G is physically larger, but at 480-by-800 pixels, the total pixel count of 384,000 still pales in comparison. More pixels in a smaller screen will also give the iPhone 4 astounding clarity and sharpness due to the pixel density. The bifocal crowd might prefer the EVO 4G for its larger size, but most users will probably prefer the sheer detail and clarity of the iPhone 4.

That 4.3-inch screen naturally boosts the footprint of the EVO 4G significantly, and this size 14 monster can’t compete on any level when it comes down to the denim. Besides being taller and wider, it’s also 0.5 inches thick compared to just 0.37 inches on the iPhone 4, and weighs 6 ounces compared to just 4.8 on the iPhone 4. No contest.

Both the iPhone 4 and EVO 4G sport top-of-the-line processors. The iPhone 4 uses the same capable A4 processor as the iPad, and the EVO 4 uses the hotrod Qualcomm Snapdragon running at an impressive 1GHz. You’ll have to wait for the iPhone 4 release to see head-to-head benchmarks, but AnandTech pitted the iPad against the EVO 4G and found a 37.6 percent real-life performance gain in page load times. Of course, different operating systems and a range of other variables make this far from scientific, and Apple could underclock the model in the iPhone 4 for battery life, further throwing a wrench into the works. Bottom line: Until the iPhone 4 makes it to the wild, it’s too early to tell how it will perform beside the EVO 4G.

We’ve always found Apple’s neglect for microSD expansion slots irritating, and that hasn’t changed with the iPhone 4. But at the end of the day, the iPhone 4 offers the same maximum storage as the EVO 4G, and for less money.

The EVO 4G comes with an 8GB microSD card preinstalled, but you can potentially expand it up to 32GB with a larger card. Unfortunately, 32GB models remain quite rare and you’ll need to drop at least $200 for one. By contrast, the least expensive ($200) iPhone 4 comes with 16GB of built-in memory, and it only costs $100 to upgrade to 32GB. As of press time, a smartphone owner who wanted the maximum memory would pay $300 from Apple, and or $200 from HTC plus $200 from SanDisk for a total of $400. A user who wanted the minimum would pay the same ($200) on both devices, but get 16GB on the iPhone 4 and only 8GB on the EVO 4G. The iPhone 4 wins on all accounts.

Both the iPhone 4 and EVO 4G sport both back cameras for snapping photos and front cameras for video conferencing. The EVO 4G gets the sharper vision on primary cam, shooting at 8 megapixels to Apple’s 5 megapixels, and on the front-facing cam, which shoots 1.3 megapixels to Apple’s VGA (0.3 megapixel) cam. Higher resolution doesn’t always mean a better camera, but we’ll have to give the EVO 4G the upper hand until launch time. The EVO 4G also sports a dual-LED flash rather than a single-LED flash, potentially making it more potent for night-time shooting.

For video, both cameras are capable of high-def 720p recording, but the iPhone 4 can shoot at a full 30 frames per second while the EVO 4G can only do 25.

That “4G” in the EVO’s name isn’t just for kicks, although we happen to think it rolls off the tongue nicely. It’s actually the first phone in North America to ride on a blazing fast 4G network, potentially putting an end to the molasses-slow loading we typically associate with browsing on a mobile phone.

How much faster? HTC claims 10 times, but that’s based on comparing the very slowest end of average 3G speeds (600 Kbps to 1.7 Mbps), to the high end of its own 4G claims (3 to 6 Mbps). We managed to hit 3 Mbps once in a while in our own 4G network tests, but it was the exception, not the rule, and we typically got much slower. PCWorld’s speed tests of the EVO 4G confirmed the same type of network performance on the EVO 4 when testing around the Pacific Northwest.

That said, even 3 Mbps is more than you could ever hope to wring from most 3G phones, and the EVO 4G can do things that the iPhone 4 just won’t, like videoconferencing without a Wi-Fi connection. “Ten times faster” is an obvious marketing exaggeration, but with think most consumers would be plenty happy with “twice as fast,” which is speed you might actually be able to achieve, depending on location.

Even if you discount the 4G capability for its battery life, the EVO 4G also pulls an interesting trick that should leave iPhone 4 owners jealous: it functions as a Wi-Fi hotspot for sharing its connectivity with other devices – like laptops, tablets, and even other cell phones.

Battery life has never been a strong point for Apple’s notoriously thirsty smartphone, but the company claims to have improved it this time around, and the same 4G modem that gives the EVO 4G its leg up in connectivity is its Achilles heel here. HTC hasn’t released complete battery life estimates for the EVO 4G, but we managed to get six hours of only on-and-off 4G data usage, while Apple claims the iPhone 4 will do six solid hours on 3G. Talk time also seems to suffer, with HTC claiming 360 minutes on the EVO 4G and Apple claiming 420 on the iPhone 4.

It’s worth noting, of course, that the EVO 4G sports a replaceable battery while the iPhone 4 has a sealed internal battery, eliminating the possibility of battery swaps. Although we don’t know too many cell owners who would carry around a replacement to swap out halfway through the day, long distance travelers who spend plenty of time away from outlets will certainly appreciate the possibility.

We could run a keyboard into the ground spelling out the differences between the newly dubbed iOS and Android, but we value our previous keys, so let’s just say they each have their own advantages.

Apple’s iOS undoubtedly lacks the flexible open ecosystem of Android, which allows software like game console emulators that Apple has banned, but Apple holds the upper hand in selection, boasting 225,000 third-party apps to Android’s 70,000 or so, at last count. The latest release also alleviates some of the most frequent complaints about previous versions, like the lack of multitasking and folders for apps.

While techies will undoubtedly appreciate the lack of censorship and restrictions on Android, more mainstream consumers will find plenty to like about Apple’s overflowing App Store and ease of use, making this issue largely a matter of taste.

Impressive as both phones are, Apple’s iPhone 4 appears to be a better deal coming out of the gate than HTC’s innovative EVO 4G. Why? HTC’s biggest bragging point – 4G connectivity – proves to be less of an advantage in real life than on paper after factoring in real-life network speeds and issues with 4G battery life. It also has a small leg up on the iPhone 4 in camera resolution, but less fluid 25fps HD recording also helps diminish that minimal edge. Meanwhile, the iPhone 4 is substantially smaller, has a higher resolution screen, and offers more storage for the money. We’ll wait to get the iPhone 4 in our hands before issuing a definitive verdict, but based on specs, the iPhone 4 truly does hold the upper hand.

Check out our other smartphone comparisons: