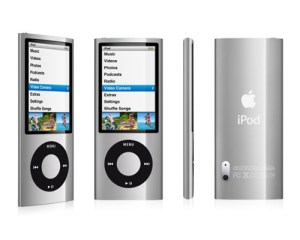 The new iPod nano boasts the same small size as its predecessors, but now the back of each unit touts a video camera and a microphone—and the front of the unit also offers a slightly-larger 2.2-inch display. Users can shoot video directly on the nano, storing it in the units’ 8 or 16 GB of flash memory; users can watch the video directly on the iPod nano or sync it back to their computers, where it’s all ready to be uploaded to YouTube. iPod nano users can use the integrated microphone to record voice memos, and the nano is also gaining something that has been missing from Apple’s iPod lineup since day one: an FM radio tuner. The new iPod nano picks up the Voice Over feature originally introduced on the iPod shuffle, which announces track and playlist information. The new iPod nanos are available today in a wide range of colors, with the 8 GB edition running $149 and the 16 GB edition priced at $179.

Apple spent a good portion of its press event extolling the virtues of the iPod touch as a gaming platform, showing off forthcoming titles ranging from Electronic Arts with a version of Madden NFL 10 to action games like Assassin’s Creed II and Nova. To that end, Apple introduced new 32 GB and 64 GB versions of the iPod touch which the companies claim are as much as 50 percent faster than the originals, thanks to OpenGL | ES 2.0. Apple has also introduced new pricing on its iPod touch line, offering the existing 8 GB edition for $199, and offering the 32 GB edition for $299 and a 64 GB edition for $399.

Apple also had a surprise for folks who thought the iPod classic was going the way of the dinosaur: Apple is pushing the capacity of its tried-and-true hard drive-based media player from 120 GB to 160 GB, while retaining the $249 price tag. Apple also introduced new colors for the diminutive iPod shuffle (black, silver, pink, green, and blue): the 2 GB edition drops to $59, while the 4 GB edition is still $79—Apple also announced a special edition $99 iPod shuffle in a stainless steel case.

Apple also took the wraps off iTunes 9, the latest version of its digital media management and jukebox software. iTunes 9 expands on the software’s existing “Genius” feature—which would make suggestions about songs that go with a particular track—and leverages listener preference data to automatically generate up to a dozen “Genius Mixes,” playlists of songs from a user’s library the “genius” database believes will go well together. In our experience, iTunes’ “Genius” feature has been been at best comic, but we confess we fall well outside Apple’s target audience for the feature. iTunes 9 will also introduce new media synchronization capabilities, and adds sharing features that enables users to copy media (music and video) to up to five authorized computers in a home. The iTunes store will also be able to support liner notes, photos, and essays for albums—the sort of stuff that used to be packed into LP releases but fell by the wayside with CDs and digital music.