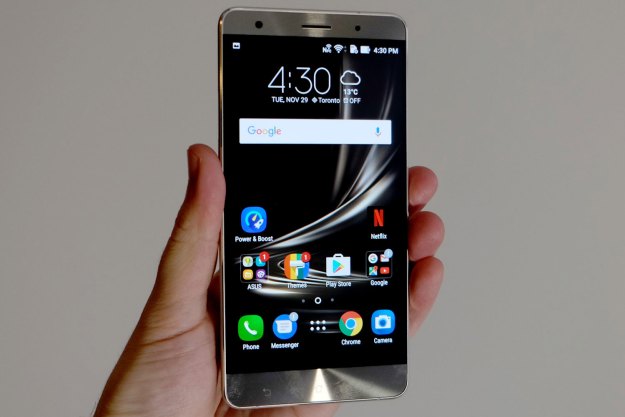 “The Asus Zenfone 3 Deluxe is wildly overpriced with a heavy-handed UI and middling camera.”

Asus is still making attractive smartphones with impressive spec sheets. This year, the Zenfone 3 Deluxe Special Edition was one of the first phones to pack a Qualcomm Snapdragon 821 processor and 6GB of RAM.

With an all-metal body and 5.7-inch AMOLED screen, the Deluxe has the looks to fit right in with the best flagships of the year. However, some of the parts that make up the sum drag it down enough to remind you that it’s not going to win too many one-on-one battles. Its sky-high price makes it impossible to recommend.

It’s one thing to have an all-metal body, but this unibody aluminum design looks elegant. This isn’t plastic made to look like something it’s not, it feels refined and sophisticated. Looking at what Asus has been doing on the laptop side lately, the design philosophy used here falls well in line with what the company has been trying to do in delivering better quality.

The 5.7-inch AMOLED screen puts the phone squarely in phablet territory, though more and more devices that came to market this year already have 5.5-inch screens. Still, by reducing the side bezels and placing the soft keys on the metal below, all that screen real estate feels big without the device’s form factor feeling oversized. Antenna bands aren’t obvious, maintaining a uniform appearance throughout, and the fingerprint sensor on the back is a nice touch that follows an industry trend.

Its sky-high price makes it impossible to recommend.

Having USB-C for the charging port sticks to keeping with where the industry is headed, yet there is only one speaker next to it, while a pinhole microphone sits on the other flank. The headphone jack is accessible at the top of the device. Outside of the power and volume buttons on one side, with the SIM and MicroSD card tray on the other, there is nothing else to note for physical controls.

It’s easy to like to what the Zenfone 3 Deluxe offers on the inside, too. It is sold unlocked and works with most GSM carriers anywhere, including AT&T and T-Mobile. It has a dual-SIM slot that is well-suited to traveling. There is 64GB of internal storage with a MicroSD slot that can take you up to 200GB and beyond. The Qualcomm Snapdragon 821 processor and 6GB of RAM suggest there is plenty of power running things. Even the 23-megapixel rear camera sounds like a big deal, though it’s not all it’s cracked up to be.

A place of zen?

The same could be said of Asus’ ZenUI overlay that sits on top of Android. It was logical to point the finger for the memory leak issue that plagued the Zenfone 2 squarely at the bloatware Asus insisted on stuffing into the device. Having seemingly learned not to be overzealous, Asus dials things back with the Deluxe, which actually has slightly fewer first-party apps than the regular Zenfone 3.

Anything that cuts down on that kind of excess is appreciated, but Asus should have been ruthless on the chopping block. There are still more than 15 of the company’s apps pre-installed. In fairness, Apple and Google aren’t far off with their own wares, but the difference is that those are more ubiquitous. The likelihood of any of Asus’ apps becoming sleeper hits would be remote at best.

Two standouts are almost certainly aimed at addressing potential memory leak problems. Power and Boost is on the home screen, ensuring redundant data can be quickly swept away to optimize performance. Mobile Manager dives deeper, requiring access to the phone’s storage and calling permissions to start with, mainly because it touches various aspects of the phone’s features to enhance performance. It’s kind of like a health check that dips into privacy and security settings, providing some insight into how well the phone is running.

More Asus apps are available to download through a direct portal under ZenUI in the settings. All told, there are more than 30, including the ones already installed. One worth using is Splendid, an app that controls the screen’s color temperature, including a bluelight filter similar to Apple’s Night Shift feature. It also has a Super Color option that saturates colors and increases contrast, which can be good for watching movies or shows.

The rest of the UI finds ways to remind you that this isn’t a stock version of Android. From the notification shade to pop-ups noting how much memory was saved when closing an app, ZenUI is an active overlay, in many respects. Unfortunately, there is no real way to turn any of it off.

Our review unit had last year’s Android 6.0.1 Marshmallow installed, and it’s not clear when it will be upgradeable to 7.0 Nougat, because optimization with ZenUI will determine how long that takes. With carriers out of the way to weigh in with their own tests, you would think it won’t take as long, but for now, Asus hasn’t confirmed a timeframe. That’s troubling because of security concerns. It’s vital that users get timely Android updates to protect them from hacks and security flaws.

Having 6GB of RAM may seem like overkill, but I came to understand why it turned out to be like an insurance policy. ZenUI is a resource hog in ways Asus can’t quite explain, meaning that 2GB seems to be taken up by the system often, even when only one or two apps are open. The good news is that the phone rarely ever uses the maximum amount of RAM, thereby making things like gaming and streaming pretty smooth.

It also makes the Deluxe a good multitasker. I could have five apps running in the background while playing Angry Birds 2 and there would be nary any sluggishness. Moderate daily usage is unlikely to push the phone to its limits, even if you might need to drain excess memory every so often.

Screen brightness is good enough, but not quite as high as other phones generally produce. The speaker is terrible at higher volumes, so Bluetooth and the headphone jack become ever more important. Call quality is interesting, because people I talked to never complained about quality, yet I found quality to be somewhat inconsistent on my end. It may have been more a connectivity problem with the carrier’s service, but either way, it was an odd occurrence.

The fingerprint sensor is decent at doing what it’s supposed to, though it doesn’t do it any better or worse than others in its price range.

There’s a reason why more megapixels don’t always translate into good camera output. Asus used a 23-megapixel image sensor with laser autofocus and optical image stabilization in an f/2.0 lens. On paper, that sounds pretty robust, but in practice, it becomes the anchor weighing the Deluxe down.

The biggest problem is that it can’t capture images consistently well. Shooting in daylight isn’t so bad, but the auto exposure and white balancing veers off when shadows and highlights contrast too much. Low-light and night shots are very difficult to get right, despite a reasonably open aperture and image stabilization at work.

The manual mode included in the camera app helps offset some of these weaknesses, but it can’t work miracles. Had Asus chosen to go with a comparable sensor that lowered the megapixel count, yet made the micron pixels larger, the Deluxe would have arguably been a far better shooter. Instead, it’s mediocre at best, which is a shame when other aspects of the device do well.

The 3,000mAh battery inside is naturally not removable, and is somewhat small for a phone of this size. It’s pretty good under the circumstances, easily lasting a full day with moderate usage. The USB-C port has Quick Charge 3.0, and I found Asus’ claim of a 60 per cent charge in 39 minutes to be fairly accurate so long as I was using its own charger

Asus offers a one-year limited warranty. It doesn’t cover accidental or water damage, so unless you have a defective unit, you’re probably out of luck. You can read more here.

Asus’ Zenfone 3 Deluxe Special Edition is currently out of stock on Asus’ website, so it’s really hard to come by at the moment. It’s not available on other retailers’ sites or in carrier stores, either.

The $800 price tag is absurd. For an Asus phone with a heavy-handed user interface, a hit-or-miss camera, and no official carrier support; you really shouldn’t have to pay such a premium. You can get dozens of brand-name phones for less, and you should.

You can buy several other phones that are better for less money. We recommend you buy the $650+ Google Pixel or Pixel XL instead. Google’s phones offer superior cameras, pure Android Nougat, timely updates, amazing customer service, and perks like an artificially intelligent Assistant. Apple’s $770+ iPhone 7 Plus is also a strong phone, if you like iOS. Those who want to save some money should check out the $440 OnePlus 3T or the $400 ZTE Axon 7 as alternatives.

The question really relates more to the software than hardware. The build quality of the Deluxe is excellent, so it will be fine physically, albeit susceptible to damage from a fall or water submersion as any other phone would be. How long it will take to upgrade to Nougat and later Android updates is hard to gauge because Asus has no real track record in doing that quickly. The device should last you about 2-3 years, though software updates may be patchy.

No. Asus’ ZenUI, slow updates, and janky camera make the Zenfone 3 Deluxe a no go. You can buy a number of other phones with better cameras, better performance, and cleaner software for the same price or less.