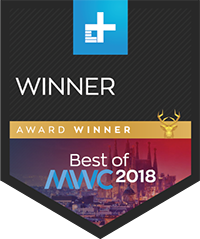 With yet another popular Nokia phone resurrected from the dead, a driverless car powered by a smartphone, and of course, the return of the Samsung’s Galaxy S-series, Mobile World Congress 2018 in Barcelona has been lively, packed with plenty to see and experience.

Then it snowed. Like the blackout at CES this year, it’s all anyone could talk about at MWC.

No matter the snow or the unusually cold weather, Digital Trends’ mobile team waded through the biggest mobile show in the world to find the best products for our annual Best of MWC 2018 awards.

From a smartphone with brilliantly unique camera technology, to a software company bridging the gap between feature phones and smartphones, check out the most exciting tech we uncovered at this year’s show!

When a phone maker nails a beautiful design, it’s entitled to refine rather than revise and that’s exactly what Samsung has done with the Galaxy S9 Plus. The awkwardly-placed fingerprint sensor has been moved below the camera module, but otherwise you’ll be hard pressed to tell it apart from the S8 Plus. And that’s no bad thing. It means you get the same gorgeous Infinity display, and pleasing curves. There’s more power under the hood with the latest Snapdragon 845 and an extra 2GB of RAM to boost performance, but the headline feature is a new dual-camera setup.

The combination of a wide-angle lens with the ability to switch apertures and a telephoto lens gives you one of the most powerful and versatile cameras ever to grace a smartphone. We’ve already seen how the huge f/1.5 aperture can conjure bright shots in low-light conditions, but you’ll also enjoy the optical zoom, blurred background bokeh effect, and the ability to shoot in super slow motion at 960 frames-per-second.

You won’t find a great deal else that’s new here, but this is the flagship that Samsung has been working towards for the last few years, and it shows.

These days, smartphones can almost do it all – but they’ve yet to replace our need for desktop computers. With Samsung’s Dex Pad, we’re one step closer to turning our phone into the ultimate PC.

Following up on last year’s Dex Station, both the Dex Pad and its predecessor transform your phone into an Android-powered desktop system. All you need to do is connect the accessory to a monitor via an HDMI cable and lay the Galaxy S9 on the pad.

The beauty of the Dex Pad is that it also turns your phone into a touchpad – eliminating the need for a mouse and cutting one more item from what can sometimes be a cluttered workspace. A future software update will allow you to use the Galaxy S9 as a keyboard. By replacing two essential desktop accessories, the Dex Pad gives you free reign to work anywhere there’s a monitor – without having to worry about carrying additional items other than your Galaxy S9.

Samsung also solved a major pain point from the previous model – access to the 3.5mm headphone jack. Plugging the Galaxy S8 into the dock originally blocked the bottom edge, but it’s no longer an issue thanks to Dex Pad’s new lay-flat design.

It’s hard to make a phone look and feel different these days, but HMD Global manages it with the Nokia 8 Sirocco. With a name Nokia used in the past to signify special-edition phones, the Nokia 8 Sirocco is unique in its design, build materials, and camera.

The Sirocco is 7.5mm thin, thinner than the iPhone X, but what’s more impressive is how the phone’s rear and front curve into its stainless steel frame — which is also a much tougher material than the aluminum used on most smartphones. At its thinnest point, the Nokia 8 Sirocco is just 2mm, and it feels fantastic in the hand, albeit a little sharp. The minimized bezels also help make this 5.5-inch phone feel pocket-sized.

The dual-camera system is also fast to react, with its Zeiss lens, and the phone features the unique “bothie” mode that simultaneously uses both the rear and selfie cameras to capture videos or photos. You can even live-stream directly to Facebook or YouTube from the camera app. The Sirocco won’t let you down with its blazing-fast performance, thanks to the Snapdragon 835, 6GB of RAM, and 128GB of storage.

It’s expensive, but the Nokia 8 Sirocco is undeniably unique and a little bit special.

Tablets have fallen out of favor over the last few years, with Apple reigning supreme with its iPad range, and more people hanging on to their current devices for longer; but Huawei has given us a reason to consider an update — and not just to another iPad.

The MediaPad M5 Pro’s design is its biggest success. We use tablets for media and entertainment, and the M5 Pro’s landscape orientated controls and style push us to do so. If you’re a TV show binge-watcher, the MediaPad M5 Pro begs you to watch just one more episode.

Taking inspiration from its smartphones, Huawei uses a piece of 2.5D glass over the large, super high resolution screen for supreme in-hand comfort. There are no sharp edges, and the tablet nestles in your palm — essential for extended viewing sessions.

Huawei has made a stylus for the M5 Pro, but rather than charging extra for it, it’s included it inside the box. Combine it with the keyboard case, which prompts the tablet to activate a high productivity Windows-style interface, and you’ve got a versatile mobile computing and entertainment platform all-in-one, that still costs less than the competition.

There are 1.3 billion people in the world that use feature phones, and as 2G and 3G networks fade away to make way for better 4G networks — and even 5G — there’s one software company helping to bridge the gap between a dumb phone and a smartphone: KaiOS Technologies.

Feature phones are not just dumb phones anymore, and KaiOS is also helping make these devices hyperlocal. For example, the JioPhone has support for 22 Indian languages and dialects with plenty of localized content. The company has initiatives to push local developers in each market to create apps for these regional phones.

KaiOS is serving a sizable market that has been neglected since the start of the smartphone revolution.