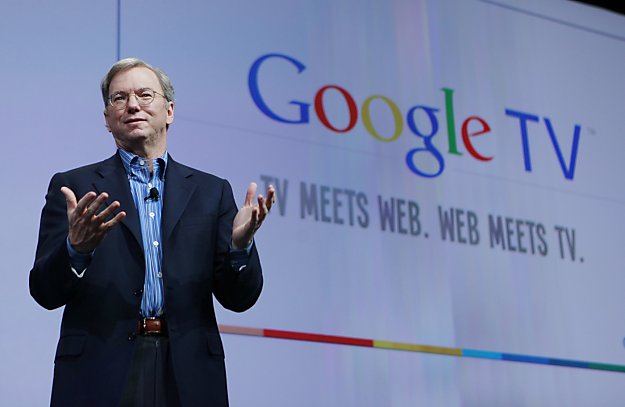 It hasn’t exactly been smooth sailing for Google TV. Not long ago it was reported that sales of the streaming sets were being overshadowed by returns, and that Google planned a revamp to regain some of this lost ground. Logitech was losing faith in the product, and it didn’t appear that Google was having any easier of a time getting TV networks on board.

But Google TV will not be closing its doors—far from it. Former CEO and now chairman Eric Schmidt wants to do more than just hype his products. He wants to convince broadcasters that the TV business and consumption model is changing, and that complying is in their best interests. This weekend at the Edinburgh International TV Festival, Schmidt revealed that Google is in discussions with all of the major British broadcast companies and is getting ready for a European launch in early 2012 of its set-top box streaming service.

Schmidt didn’t only announce the launch. He also issued a warning: “You ignore the Internet at your peril. The Internet is fundamental to the future of television for one simple reason: Because it’s what people want,” he said. It’s clear from his speech that the Google chairman isn’t simply trying to reignite interest in Google TV—he’s trying to change the industry. At the very least, he’s attempting to plant the idea that broadcasters better get with the times.

He has a point. Consumers are increasingly turning to on-demand services provided by their cable companies, DVRs, or coupling their cable offerings with subscription-streamed shows via a console or set-top box. Some, of course, are cutting the cable cable altogether and turning to devices and subscription services like Netflix or Hulu for their big-screen needs. Pacific Crest consumer electronics senior research analyst Andy Hargreaves supports this, saying “It’s a matter of when, not if” broadcasters will get on board. “But it could be several years,” he says. “Content owners make a very large amount of money in the current ecosystem. Any competitive offering to cable or satellite will have to prove that it can generate equivalent or better economics before content owners will look to them for distribution.”

And Google doesn’t have the strongest legs to stand on and lecture here. As previously noted, Google TV’s market performance has been disappointing. Schmidt took some time to address this failure, saying the product has “not been a huge success.”

“I think it’s a beta product,” he explained. “Google typically brings out beta versions, and they’re not for the faint of heart, and I think that’s what you saw. We were not able to get the product perfect before we shipped it.” Understandably, then, TV networks aren’t jumping at the bit to partner with Google TV. Usually you want to show off your success and foresight in order to attract collaborations—but Google’s method instead seems to be using the future as a threat.

Schmidt also reasserted that Google had no ambitions of competing with broadcasters. “Some have suggested Google should invest directly in TV content. To argue that misunderstands a key point: Google is a technology company.” He also said that company has “neither the ambition nor the know-how to actually produce content on a large scale.” However, there are been some clear signs Google plans to do more with YouTube than provide a platform for videos of cats jumping into boxes.

So will a Google TV redux and European launch spell success? It seems like the only offer anyone’s willing to give is a solid “maybe.” “There’s something to it, but it’s a long ways off,” Hargreaves says. “TV watching is passive by its nature, which is a lot different from smartphones and PCs, which means that search, apps, and using a keyboard and trackpad are too complex for most people to enjoy. If Google TV can become simpler, and more importantly, add unique video services, then it could do well over time.”

It’s convincing the industry it’s a worthwhile product that may be an issue. Nigel Wally, an analyst with media consultancy firm Decipher, tells The Globe and Mail that “this is a device that is mired in miscommunication and misperception. Seasoned professionals are not clear what it actually does…there is very little new and innovative in Google TV.

This news comes at the same time that Apple is rumored to be reengaging efforts for an iTV and subscription content service. This of course begs the questions of who between the two will be first to capitalize on the television platform—or whether it could be a dark horse. Hargreaves tells us that whoever it is will have to have a lot of money to gain premium content, which narrows it down. “Apple has the resources and user base to put something together, but they’d have to pay a ton up front and I’m not sure they will.”