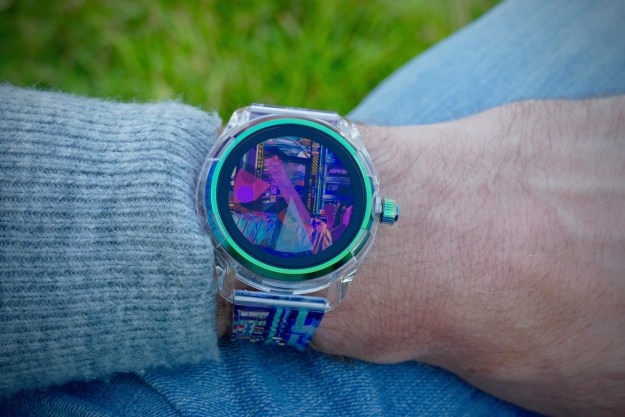 “The Diesel On Fadelite X Mad Dog Jones limited edition smartwatch has a unique, eye-catching design, but the tech inside lags behind its space-age looks.”

People I speak to have taken a shine to the Diesel On Fadelite X Mad Dog Jones smartwatch. I’ve been told it is exactly the kind of watch they’d wear, and that it really catches the eye. These kind of compliments about a smartwatch are unusual, as most examples tend to come in black and look quite technical, without any significant visual flair to attract admiring glances.

The question is, what’s my response at this point? Sadly, it’s not quite as simple as giving a hearty recommendation to go out and buy one. Buying any WearOS smartwatch requires thought, and although the On Fadelite X Mad Dog Jones gets the look right, there are other aspects that can’t keep up. However, this still isn’t the full story, as these downsides haven’t stopped me from wearing it.

Confused? Don’t be. This may just be the first smartwatch you should buy with your heart and not your head.

I don’t usually wear a watch to tell the time. It’s actually not rare for me to wear a watch that shows the time from a different time zone, or that hasn’t been adjusted for daylight savings, simply because I’m so much in the habit of looking at my phone for the time. I wear watches that I think look brilliant, as an accessory rather than a strict timepiece. Design and style wins over functionality, and I’m willing to bet there are others who feel the same.

The Diesel On Fadelite gets the design right regardless of the model you choose. In standard form, the transparent straps and bold colors look fantastic, are in keeping with Diesel’s brand, and tap into summer trends. The Mad Dog Jones version swaps the summer-cool vibe for custom cyberpunk-style art, a transparent case, and eye-catching rainbow ionized aluminum metalwork. It’s unlike any other smartwatch I’ve seen.

Mad Dog Jones (hereafter known as MDJ) is an artist who publishes his work on Instagram, and he worked closely with Diesel on the design of this special edition. The strap is emblazoned with custom art, he designed two special watch faces, and the special packaging comes complete with a cloth featuring a larger piece of his art. You’ll find a second, completely transparent 22mm strap inside as well. MDJ’s artwork is “under” the strap to give it a 3D look, and it also has a subtly embossed Diesel logo. It’s colorful and eye-catching, and it’s highly unlikely it’ll lose its luster over time due to the way it’s made.

The On Fadelite’s lightweight 44mm nylon case is only 12mm thick, and paired with the modest 1.2-inch, 390 x 390 pixel screen, it’s suitable for most wrists. I’ve been wearing the watch for more than a week and I’d hoped the strap would shape itself to my wrist more, but it remains exceptionally stiff, and if it’s done up too tightly, it becomes uncomfortable and hot. The material grips on to your wrist and the strap’s keeper too, and it’s a struggle to get it undone.

This smartwatch is the pair of shoes you really love that pinch your toes. The Diesel On Fadelite X Mad Dog Jones is a bit uncomfortable, but it looks so damn good, I simply didn’t care. I wear it loosely, which helps, and wouldn’t ever consider wearing it to do much heavy exercising in, or sleep with it on either. Does this defeat the objective? I don’t think so. The Diesel On Fadelite is a fashion smartwatch, designed to look amazing rather than be worn in all situations, 24/7.

The On Fadelite was announced at CES 2020. Delays meant the MDJ version is only now making it onto wrists, and it does so with the Snapdragon Wear 3100 processor inside. This is unfortunate as the Snapdragon Wear 4100 has since replaced it, promising a significant performance increase this watch will never see. Worse, the On Fadelite has 512MB of and not 1GB, usually considered a minimum to get wheezy old Wear OS working at an acceptable pace.

In reality, the On Fadelite does handle these poor on-paper specs better than expected, but it’s no rocket ship. Activating data-heavy features like or Google Fit takes a few beats longer than you want, and it’s often slow to react after being awakened, especially when you then ask it to show notifications. Sighs of frustration as the smartwatch considers what it should do before actually doing it are common.

Once it’s going, the On Fadelite keeps up a decent pace, and it handles the animated watch faces better than I expected too, as this was a serious problem on the Diesel On Full Guard 2.5. On the subject of watch faces, the MDJ-designed Vision Room face is perfectly in keeping with the strap’s artwork, but I still can’t quickly work out what time it’s supposed to say. So, add in “can’t read the time on preferred watch face” to the list of things that should, but don’t, stop me wearing it.

What do I like? Google’s Wear OS is controlled using swipes and the oversize rotating crown — a Diesel design trait — on the side of the watch, which is sized just right for scrolling though the long lists that dominate Wear OS’s design. What don’t I like? Setup is irritatingly ponderous on an Android or iOS phone, and the ambient light sensor is poor — I ended up just leaving the screen brightness on level 4 or 5, which obviously impacted battery life.

Notification alerts have a mind of their own. It usually displays alerts multiple times, and often chooses to show an old notification on the screen when a new one comes through. Oddly, the notifications work far better connected to an iPhone than an phone. However, many other features don’t work on iOS, including Apple’s own Messages and associated Memoji. There’s also an inability to respond to notifications on your wrist, plus the Wear OS weather app won’t work either.

All this does make the On Fadelite sound much worse than it actually is, but many of the problems affect all Wear OS smartwatches. My expectations were low based on the processor and configuration, but the On Fadelite turned out to manage better than I feared it would, and is an adequate performer for casual everyday use.

Google Fit remains one of the easiest-to-use fitness trackers, and yet still delivers plenty of data to keep the more hardcore users satisfied. I find racking up heart points during the day motivational, and appreciate the range of activities it can track. Everything is displayed in the attractive app on your phone, and it all works in the background, with limited interaction from me until I want to track a workout. There’s a heart rate sensor on the back, but it doesn’t have features like SpO2 monitoring or an electrocardiogram (ECG), which are quickly becoming more common smartwatch features.

The On Fadelite isn’t really a watch you’ll want to wear to the gym, or during an especially sweaty activity. Not because it isn’t capable enough, but because it’s a lifestyle smartwatch, not a sports smartwatch. For example, the strap isn’t very flexible and doesn’t wick away moisture like others specifically designed for sports, so it becomes uncomfortable. I wouldn’t want to knock or damage the pretty case either. It’s fine for general fitness tracking, and I wore it for ordinary activities at home and outside, but if you’re looking for a smartwatch to wear on a marathon or headed down the ski slope, there are more suitable choices out there.

You’ll get one day from the On Fadelite’s battery, and no more. This is with the brightness set at level 4 too, which is something of a surprise, and with the always-on display active as well. It’s charged using the standard plastic plinth you get with all Fossil-made Wear OS smartwatches, and the battery takes an hour and 20 minutes to fully charge. The On Fadelite has stand-alone GPS, for Google Pay, 4GB of storage space, and some preinstalled apps including Spotify.

The Diesel On Fadelite X Mad Dog Jones costs $300 and will be available in strictly limited numbers. If you want an On Fadelite smartwatch and aren’t worried about it being the MDJ edition, the standard watch comes in red, black, blue, and clear color schemes for $275 U.S. or 249 British pounds, and is technically identical to the MDJ model. All are available through Diesel’s own online store.

The Diesel On Fadelite X Mad Dog Jones is a beautifully presented, desirable, and highly unusual special edition smartwatch. I feel good wearing it, it attracts compliments, and it brings essential identity to what’s often a rather characterless piece of technology on our wrist. However, the delays in release have not been kind to it, as the underlying tech is outdated and the performance suffers because of it, which in turn affects longevity. Your head will tell you it’s not a good buy, but once you see it, your heart will tell you something different.

Yes, the Apple Watch Series 5 or Series 6 are better alternatives if you own an iPhone. They perform better, work with your iPhone more cohesively, and have great health tracking and a wealth of capable apps. They’re also highly customizable for that unique look. However, at $399 to start, it’s also more expensive.

If you own an phone ,the $279 Samsung Galaxy Watch Active 2 and the $429 Galaxy Watch 3 have better software than the On Fadelite, and in the case of the Watch Active 2, it’s priced similarly. You’ll pay more for the Watch 3, but the control method is excellent, it comes in two sizes, and looks great too.

Can’t find the Mad Dog Jones version of the On Fadelite? The transparent body with ionized metal case is available with the clear strap in the standard range, just without Mad Dog Jones’ artwork on the strap, cloth, or box. Want more health-focused features and a stylish design? The $299 Withings ScanWatch is excellent.

The On Fadelite X Mad Dog Jones’s unusual design means it’ll stay fresh-looking for several years. It’s swim-proof and water resistant to 30 meters, and the nylon case should be relatively hard-wearing too. Google does send out regular software updates to Wear OS, but don’t expect them to contain new features very often. The battery will eventually degrade through regular use and return less standby time, but this shouldn’t be a problem for at least two years.

No. At least, this is what the head will tell you, because there are far better smartwatches available. However, the On Fadelite X Mad Dog Jones looks so damn fantastic that it may not matter. I love that it exists, appreciate the synergy between Mad Dog Jones and Diesel, and still have it on my wrist right now even though it’s not a brilliant smartwatch. This could be the first smartwatch that’s a true heart-rather-than-head purchase.