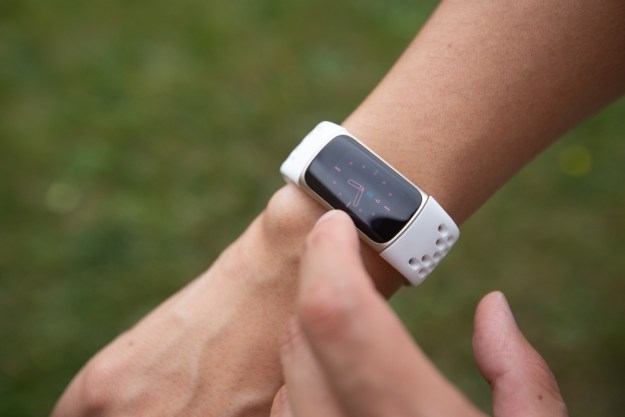 “The new-and-improved Fitbit Charge 5 delivers everything you could want in an advanced fitness tracker.”

The new design makes this tracker more comfortable and appealing, but it also comes with a hefty feature list that matches the brand’s most decked-out smartwatches. Most notably, the Charge 5 is the very first Fitbit fitness tracker to work with the Fitbit ECG app, joining the ranks of the Fitbit Sense smartwatch. For loyal Fitbit fans or first-time fitness tracker users, the revamped Charge 5 has a lot to offer in a super-wearable and user-friendly format.

It’s fair to say the Charge 5 received a makeover. In a departure from the boxy models before it, the Charge 5 takes a page from the rounded angles of the Fitbit Versa 3 or the Apple Watch Series 7. These softer lines make the Charge 5 more current and desirable to wear day in and day out. The Charge 5 also ups the quality with more premium materials than the plastic resin and rubber of the prior model. You’ll find a sturdier and better-looking tracker made of aluminum, glass, and resin with a silicone band — and an aluminum buckle in the sport band variation.

The replaceable bands are soft, flexible, and accommodating to smaller wrists — as petite as 5.1 inches — which I know firsthand is challenging to find with wearables. Both the standard and especially the sport band I tested felt like the first bands that fit my 5.5-inch wrist. I barely noticed I had the tracker on because it was so lightweight and fit so well. I only ever took it off before showering. It was also really comfortable to sleep with because of the quick-access sleep mode feature and the overall light build.

As for the display, Fitbit says that the Charge 5 is twice as bright in daylight as the Charge 4. While it suffers from the glare of the Corning Gorilla Glass case in direct sunlight, even on maximum brightness, the screen quality is a significant step up from the grayscale touchscreens of Charge trackers past.

I barely noticed I had the tracker on because it was so lightweight and fit so well.

Despite the glare issue, the display is impressive. Though the screen is small, with a 1.04-inch viewing area, it somehow feels spacious. It was easy to interact with and lacked major issues with responsiveness. I only experienced very minimal sluggishness with left-right swiping motions.

The Charge 5 is a dedicated fitness tracker, so you’d expect to see support for some automatic workouts like running, walking, and cycling, which it does offer. Overall, the Charge 5 supports 20 exercise modes, seven of which feature GPS tracking.

The Charge 5 turned out to be a great motivator to schedule daily walks as my form of exercise while I’ve been sidelined from my near-daily running routine due to injury. It automatically captured several of my 30-minute to 1.5-hour treks and hikes without issue. When I launched walking workouts from the tracker, GPS capture lagged slightly but never took more than a minute or two to catch up.

I compared the tracking accuracy for my walks with a Samsung Galaxy Watch Active 2. While the Active 2 is definitely more of a smartwatch, it matches the Charge 5’s fitness and wellness focus. The Active 2 captures GPS much faster than the Charge 5 and has a responsive start/stop feature, which the Charge lacks, but the two were on pace performance-wise for logging my daily walk workouts. The Charge 5 met the Active 2 step for step on distance, average heart rate, and overall time.

The Charge 5 boasts an ambitious list of wellness specs.

While trackers are much more skewed toward wellness than smart features, I’ve noticed the best fitness trackers blend both in a meaningful way. The Charge 5 does this with features like Google Fast Pair with Android phones and contactless payment with Fitbit Pay. This tracker also offers notifications for calls, texts, and emails and quick-reply functionality for Android users. Notifications arrived promptly from my iPhone and were easy to view and clear with a few taps.

The Fitbit brand is arguably more about wellness than fitness alone, and the Charge 5 boasts an ambitious list of wellness specs. In addition to the usual 24/7 heart rate monitoring, sleep cycle tracking, and active minutes and zones most Fitbits offer, this latest tracker also delivers blood oxygen saturation (SPO2) monitoring and electrodermal activity (EDA) stress level analysis. While more basic features like floors climbed and manual heart rate capture would have been nice, too, the Charge 5 focuses on the latest wellness technology.

The Charge 5 will soon offer Fitbit ECG app support, which allows you to take heart rhythm assessments directly from your wrist. It will also provide a new Daily Readiness Score for Premium members. This score analyzes your sleep and heart rate variability and looks for signs of fatigue to let you know if your body is ready to train or rest. The Daily Readiness Score seems similar to what I’ve seen in Garmin smartwatches aimed at multisport and triathlon tracking, which I’ve found to be pretty spot-on and helpful for training.

The Charge 5 provides a streamlined summary of daily stats that’s easy to glance at. However, like other Fitbit wearables, it’s very much tied to the companion app for insight into how you’ve been sleeping, exercising, or moving according to the tracker. The app is also the key to customizations such as setting up Fitbit Pay, changing the clock face, and participating in challenges. Fortunately, the Fitbit app is very clean and unintimidating, though you might have to dig into a few hidden features if you’re unfamiliar with the layout.

You can dig into every data tile and learn more or remove (hide) them if you’re not interested in tracking them. None of the data appears overloaded with information. Sleep data can be particularly detailed without feeling inaccessible, providing an overall score and breakdowns of sleep phases. The app also offers tools to help you change your habits, like setting a smart wake alarm (to wake you gently 30 minutes before your alarm) or rating how stressed you’re feeling.

The Premium subscription unlocks the deeper-level health metrics you might want to keep track of, like your heart rate variability, skin temperature fluctuations, and blood oxygen level (SPO2) saturation. It also allows you to access the one-stop-shop wellness features of Premium, with everything from guided exercise programs to tip on how to kick sugar for good. Regardless of whether you pass on or continue a Premium membership, the app interface is easy to navigate and offers an opportunity to be more involved with your data and habits.

Like the Charge 4, the Charge 5 promises a potential weeklong battery life. Using dynamic GPS mode, which relies on your phone’s GPS unless you don’t have it with you, and disabling the always-on display are a couple of the battery-saving features I took advantage of during my week of testing.

I experienced a solid 5.5 days, which seems like a fair outcome since I used the built-in GPS several times. While a whole week would’ve been ideal, this battery performance certainly bests some smartwatches that only last two days. It also took about 90 minutes to charge. This charging time tracks with Fitbit’s estimation of up to two hours to replenish the battery.

The Charge 5 retails for approximately $180 and ships at the end of September. It comes in one standard model in three different color options (black/graphite, lunar white/soft gold, and steel blue/platinum) and small and large bands.

The Fitbit Charge 5 is a stellar fitness tracker that elevates everything Fitbit trackers do well. Its compact and fashionable design makes it an ultra-wearable 24/7 accessory. But beyond the modern and streamlined look, it’s jam-packed with wellness features and data you can dive into with the user-friendly Fitbit app.

You’ll be hard-pressed to find a match on all the same levels as the Charge 5. If you like the look of a traditional watch better and you’re tied to a particular smartphone OS, the Samsung Galaxy Watch Active2 or Apple Watch SE could be compelling. If you’re on a budget, the Samsung Galaxy Fit 2 more closely mirrors the look of the Charge 5 and comes with a modest but helpful assortment of workout modes, sleep tracking, and potential 15-day battery life depending on usage.

The Charge 5 is more advanced than any previous Charge. Given the material upgrades, advanced wellness support, and waterproof protection (for swimming at up to 50 meters), you should be in good shape for several years. If something unexpected happens, the Charge 5 comes with a one-year warranty.

Yes, this is one of the best fitness trackers from a brand specializing in fitness and wellness. The Charge 5 is attractive, easy to wear, and is a strong choice for anyone who wants a tracker loaded with the latest innovations from Fitbit.