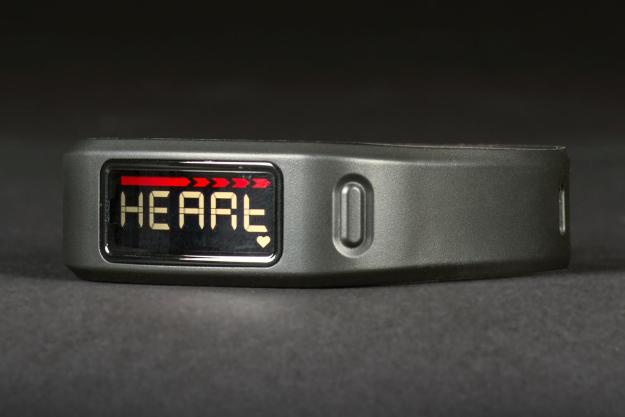 “While being waterproof, having an always-on display, and a battery that lasts a year make this a top-tier fitness tracker, we have a hard time recommending a band that is missing both a backlight and an alarm.”

For more than two decades, Garmin has been a name synonymous with GPS. Sailors, pilots, hunters, triathletes, drivers and competitive runners and cyclists have relied on specialized Garmin GPS products to pin their location on a map, show them how to get where they’re going, and get them home safely.

That makes Garmin’s new Vivofit Fitness Band a bit of a departure: It has no onboard GPS and it’s not designed for any specific athletic activity. While Vivofit can’t display where you are, where you’ve been, or how fast you’re going, it does keep track of how many steps you’ve taken, the number of calories burned and how long it’s been since you last moved. As competitors like Nike and Fitbit have proven, that’s all a growing segment of the population really needs to move down the road to better fitness and health. But can Garmin excel outside its GPS expertise and stand out in a market crowded with wannabes?

The brains of the Garmin Vivofit are tucked into a water-resistant module just 21 mm wide and 10.5 mm thick. Its always-on 1-inch LCD display is controlled by one, single button located to the right of the display. The sleek, rubberized band, which is available in five colors (black, blue, purple, teal, and slate), features a smooth, modern design that’s a little bulkier than the Fitbit Flex, but not as chunky nor stiff as Nike’s Fuel Band. It wraps around the Vivofit module and locks closed with two pins that pop and lock into holes on the opposing end of the band.

Aside from counting steps toward a goal, the Vivofit also displays a countdown of remaining steps until you can call it quits for the day. Of course, it also displays time and date, and in sleep mode the internal accelerometers can be used to track and record the quality of your shut-eye. Because it uses Garmin’s ANT+ wireless communication protocol, the Vivofit will also display heart rate when paired with a compatible ANT+ heart-rate monitor. Thanks to Bluetooth, the Vivofit can push all of these metrics to the free Garmin Connect smartphone app (iOS and Android) on the fly.

The always-on display makes the Vivofit the far and away leader of the fitness bands we’ve tested.

The Vivofit display also features a red LCD bar the above the data field. Garmin calls this the “move bar.” After sensing no motion for an hour, half of the bar is highlighted to remind the wearer that it’s time to get up and walk. After walking for a few minutes the move bar will disappear and begin timing the next static period.

The most unique feature of the Vivofit is its ability to modify step goals based on a user’s past performance. Those who continually meet their goals will find the goals increased over time, conversely, users who rarely hit their target steps will see their targets gradually reduce over time. Garmin says this features keeps people motivated and reduces any feelings of discouragement that may arise from missing a goal too many days in a row.

Power for the Vivofit comes from two user-replaceable CR1632 batteries that reportedly keep device running for an entire year without needing to be recharged or replaced. Getting the device to run for a year on two batteries, however, means some missing options. For one, there is no backlight for the LCD display to read it in the dark, nor alarms, vibration, or sound.

The VivoFit bundle we tested arrived with everything needed to begin tracking fitness right out of the box. It included the Vivofit module along with two fitness bands, one large and one small, to accommodate most any size wrist, a standard Garmin ANT+ heart-rate monitor, and an ANT+ USB dongle that allows the Vivofit to communicate wirelessly with a computer via Garmin’s ANT+ communication protocol. The box did not include a manual or quickstart guide, however it did have a foldout pamphlet printed in 12 languages directing us to “get started” at the Garmin website.

We were pleasantly surprised by how easy it was to set up the Vivofit: We grabbed the box on our way out for a hike, and while someone else drove, we set the Vivofit up and had it tracking our stats in about 15 minutes using only our iPhone 5.

After downloading the free Garmin Connect app (available in iOS and Android) you can quickly create a free account by signing into one of the popular social networks including Facebook, Google+, Yahoo, Twitter, Microsoft, and even LinkedIn. While creating an account Garmin Connect asks for personal data like age, gender, height and weight. The Vivofit uses this data to help calculate more accurate distance and calories-burned metrics.

After entering our details, the Garmin Connect app was ready to pair with the Vivofit. We turned our iPhone’s Bluetooth on and pressed and held the Vivofit’s button until the display showed the word “SYNC.” The app then asked us to enter a four-digit number that was displayed on the Vivofit (to make sure we weren’t pairing with another nearby device).

Pairing with the included heart-rate monitor was as simple as hooking the strap around our chest and pressing the Vivofit button to scroll through until it displayed the word “heart.” A few seconds later a small heart symbol was blinking in the bottom right hand corner of the display our heart rate was displayed in large, easy-to-read type, and we were ready to start tracking our steps.

The Vivofit is incapable of directly communicating a reminder to move.

The nice thing about having an always-on display is that activities never need to be interrupted to check the stats. Most of the time, we left the display set on time, then switched it to heart rate when exercising or running to get a live, constantly updated reading. For daytime use, the always-on display makes the Vivofit the far and away leader of the fitness bands we’ve tested, especially over those like the Fitbit Flex that have no display at all.

When we returned home from our hike, we plugged the included ANT+ dongle into our computer, paired the Vivofit with our computer, and were set for automatic data uploads to Garmin Connect. That’s means anytime you step within ANT+ range of your computer, Garmin Connect will automatically upload the data from your band to the website. It makes keeping track of steps entirely automatic and painless.

While the Vivofit did a fine job of tracking steps and displaying heart rate, we noticed some issues when we used the device to track other activities. The Vivofit will automatically tag an activity when it sees elevated step or heart rate. This is great for keeping track of occasional runs or stair climbing, but we wanted to see how the Vivofit would respond to a serious athletic effort. We strapped the heart-rate monitor on and rolled out for a 40-mile training ride on a road bike. During the ride it was nice to glance to our wrist and check out heartrate to see just how hard we were working. However, when we completed the ride, and scrolled through the metrics, the Vivofit move bar showed that we’d been sitting for two hours. Despite recording an average heart rate of 109 over the last two hours and a maximum heart rate for the period of 163, the move bar showed us that we needed to move. Obviously, serious cyclists will not be using the Vivofit to track rides, but it was strange that the Vivofit’s move bar didn’t factor in our heart rate to assume that we were on the move.

This brings us to the more general issue we had with the move bar: Without any vibration or tone alarms, the Vivofit is incapable of directly communicating a reminder to move. The times we most needed a reminder to get up and move (like while writing this review for instance) were not the times that we’re constantly checking our device. Even in Garmin’s promotional video for the Vivofit, a man is shown being nudged awake by his dog before he looks at his wrist and realizes that he needs to get moving.

It was while testing the sleep mode, however, that we became most frustrated with the Vivofit. Placing the Vivofit into sleep mode is functionally simple. Press down on the button until the word SLEEP appears on the display. Easy, right? But the Vivofit has no backlight. In the dark of the night (or even dusk) there is no way to see the Vivofit’s display without some other light source, which we rarely remembered to do. Most often, we remembered to put the Vivofit into sleep mode right as we were drifting off to sleep, which meant using a phone as a flashlight to avoid disturbing our sleeping partner. And remember that you’ll still need to set an alarm somewhere else: The Vivofit can’t even show the time in sleep mode, much less wake you.

Since Garmin’s Connect app is designed to be used with a whole slew of Garmin devices, some of the app’s info pages did nothing but remind us that we were using a device lacking GPS. Any time we wanted to view a past activity logged with the Vivofit we were faced with a data screen with a blurred out map and the words “This activity has no map data.” It makes sense: The Vivofit has no GPS. But the screen seems to suggest that if we configured our device correctly, we could have map data on the activity. It’s potentially confusing.

There is a lot to like about the Vivofit. Its clean, minimal, and modern design makes it easy to wear 24 hours a day without feeling too nerdy. It is a cool digital watch (especially the brightly colored versions) that does many a useful thing. It tracks steps and calculates calories and distance well, if slightly optimistically, and the automatically adjusting step goals worked great for keeping us motivated.

While being waterproof, having an always-on display, and a battery that lasts a year make this a top-tier fitness tracker, we have a hard time recommending a band that is missing both a backlight and an alarm. For a fitness band designed to be worn 24-7 (and track sleep) it seems unbelievable that Garmin engineers did not provide a way to view the display at night. And for a device that claims to remind people to move when they’ve been sitting too long, having no alarm or vibration feature seems to negate the “move bar” functionality entirely.

Topics
Video-editing app LumaFusion to get a Galaxy Tab S8 launch
The best protective iPhone cases in 2023: the 25 best ones
The best tablets for kids in 2023: top picks for your kids
The best game-streaming services for 2023
Wi-Fi not working? Here’s how to fix the most common problems
Here’s another big reason why T-Mobile 5G dominates AT&T and Verizon
Apple’s Black Unity watch band looks great and supports a good cause
The Nothing Phone 2 is real, and it’s coming to the U.S. this year
A foldable iPad in 2024? This Apple insider is ‘positive’ it’s happening
How to sync your Outlook calendar with an iPhone
Secure Your Value: Lock in the price of your Verizon phone plan for 3 years
AirTag helps flyer find his AirTag – but not his missing wallet
Best Apple Deals: Save on AirPods, iPads, MacBooks and more