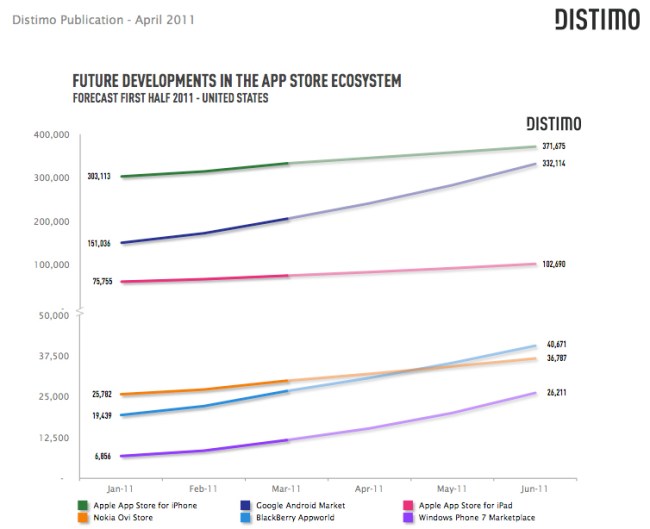 The battle of the app stores is hotting up, with Apple looking like it could be knocked off its perch as soon as this July.

A report issued on Wednesday by Distimo, an app analytics company based in the Netherlands, says Google’s Android Market is poised to take the top spot in terms of the total number of apps available to consumers.

You’ll probably have noticed that the Amazon Appstore for Android, which only launched last month, is not included in the analysis. This is because that while Distimo’s report is issued on a monthly basis, it uses data from the previous three months to better understand underlying trends in the market. So expect to see Amazon included in future reports.

In terms of the number of free apps available, Google has already coasted past Apple’s iPhone app store. Google currently has 134,342 to the iPhone’s 121,845.

Distimo says that if the app stores continue to grow at their current rate, then in around five months time Google Android Market will move into first place in terms of the total number of apps available. In next place would be Apple’s App Store for iPhone and iPad, followed by Windows’ Phone 7 Marketplace, BlackBerry’s App World and Nokia’s Ovi Store. There’s some good news for Microsoft too: “The Windows Phone 7 Marketplace will also be larger than the Nokia Ovi Store and BlackBerry App World prior to the Windows Phone 7 Marketplace being available for even a full year.”

The report also takes a look at specific tablets. Apple’s iPad, released a year ago, now has more than 75,000 apps by almost 22,000 publishers. Distimo reports that “Daily downloads in the Top 100 Overall paid and free applications for iPad combined exceed 500,000, while the daily revenue in the Top 100 paid is approximately $400,000 excluding in-app purchases.”

Many of the top iPad app developers don’t produce apps exclusively for Apple’s iOS, preferring, understandably, to take successful products to other platforms. “Fifty-eight percent of the 50 most popular publishers have already developed applications for non-Apple platforms,” says Distimo.

Apple will probably have to get used to being in second place, at least on this front. The increasing popularity of Android smartphones will only serve to increase the customer base for Android apps, which will in turn attract more app developers to Google’s operating system.

Video-editing app LumaFusion to get a Galaxy Tab S8 launch
Best Cyber Monday Tablet Deals: iPad, Amazon Fire, Samsung Galaxy Tab
These 6 things could make the Pixel 7a the perfect Google phone
The most innovative smartphones of 2022
Sunbird looks like the iMessage for Android app you’ve been waiting for
Apple Cyber Monday Deals: Apple Watch, AirPods, iPad, MacBook
Get these JBL earbuds and 4 months of Music Unlimited for $25
OnePlus’ new Android update policy matches Samsung, shames Google
How Apple can fix iOS 16’s messy lock screen customization in iOS 17
The best voice-changing apps for Android and iOS
Spotify Wrapped 2022: what it is and how to view it
Save $225 on the unlocked Samsung Galaxy S22 Ultra with this deal
Samsung Galaxy Z Fold 4 is $350 off — no trade-in needed