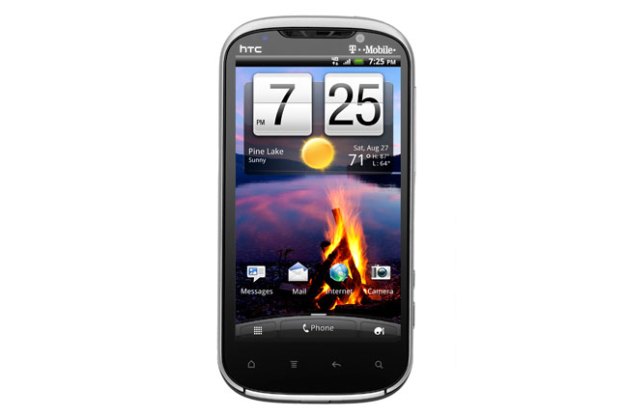 “While we're not sure it's actually worth $60 more than any other dual-core phone, the HTC Amaze 4G holds its own and excels when it comes to taking pictures and video.”

T-Mobile and HTC are quite the pair. The duo teamed up for the first ever Android phone, the G1, a few years back and HTC is once again headlining T-Mobile’s holiday lineup in 2011. The HTC Amaze 4G takes most of the best attributes of HTC devices this year and combines them into one big, 4.3-inch phone. But is having it all worth paying a steep $260 price? That’s debatable.

The design of the Amaze 4G is like a mixture between the look of the HTC Flyer tablet and the HTC Sensation. The unit has the same kind of plastic “bubble” design as the Flyer, and a completely detachable shell like the Sensation. The entire back covering, buttons, and side of the phone detaches like Darth Vader’s helmet, allowing you to see what seems like too much of the inside of the phone. However, unlike the Sensation, the shell of the Amaze recedes on the sides of the phone, like a gumline, exposing the sharp (not actually sharp) edge of the screen. It, again, looks a bit strange at first, but we didn’t find the design particularly offensive to the eyes. HTC is certainly trying things.

The Amaze 4G won’t exactly….amaze when it comes to size and weight. The handset is 11.8mm thick, making it look about twice as thick as the new Motorola Droid Razr (7.1mm thick), but fairly normal when compared to any other device. The iPhone 4S, for reference, is 9.3mm thick. It weighs about half a pound.

The power button and volume toggle of the Amaze are both on the right side of the device due to the large size of the 4.3-inch screen, but, as usual, HTC has done a great job making both buttons large and easily accessible for people with large and small hands. The usual audio jack is up top, but the micro USB slot is a bit different. HTC has combined a micro USB port with its own proprietary port, which enables the Amaze to charge much faster when on its own charger. You can still charge it with a regular USB cord too, which makes a good backup.

Finally, HTC likes its camera so much that it included not one, but two camera buttons on the side. There is a photo button and a video record button, which each do exactly what you’d expect. We don’t really see a need for two buttons, but it is good to have an actual camera button. They seem to be rapidly disappearing from modern phones.

Now here is where the Amaze shines. It runs on a 1.5GHz dual-core Qualcomm APQ8060 processor, comes with 16GB of internal memory, has 1GB of RAM, has a microSD card slot, and a qHD (540 x 960 pixel) 4.3-inch LCD display. The screen looks quite bright and clear for LCD, but it’s not quite as vivid as Samsung’s Super AMOLED Plus technology. We expect that most manufacturers will turn to AMOLED in the coming year. Still, don’t avoid this phone because of the screen. It looks great. And if we haven’t yet mentioned it, the Amaze 4G may be the fastest phone on the market. It’s certainly up there. For the biggest geeks out there, the Quadrant benchmark score of the Amaze came out to 2,250, which is a bit less than what we were getting with the Samsung Galaxy Tab 8.9, but in line with most dual-core phones.

Also, there aren’t many instances to use it yet, but the Amaze 4G does have built-in NFC support, meaning you can use Google Wallet or any other NFC solution that crops up in the next year. We expect this technology to blossom, so it’s a good way to future proof yourself, if only a little.

Android 2.3 (Gingerbread) with a thin layer of HTC’s Sense 3.0 user interface is what runs the Amaze 4G. This isn’t quite out of date yet, but Android 4.0 (Ice Cream Sandwich) will be released any day now, so if you buy an Amaze, know that you’ll be getting an update by early 2012, according to HTC. Ice Cream Sandwich doesn’t require physical home buttons (Home, Menu, Back, Search), but the Amaze, like the Droid Razr, has them. We’re not yet sure how this will affect the usability of Android 4.0, but if you want a pure Google experience, you should look into the Galaxy Nexus.

HTC Sense, like most Android interfaces, is beginning to show its age, so the move to Android 4.0 can’t come soon enough. Still, among Android manufacturers, HTC’s Sense is the most robust, customizable, and user friendly. In particular, we like how there are settings to turn on and off Wi-Fi and Bluetooth in the notification tray. The unlock screen also now has options to open directly to the text message, phone, email, or camera app.

If you’re buying a phone for a friend, or this is your first smartphone, HTC is a great choice because it includes some great widgets and suggestions to get you started. More advanced users may want to opt for a pure Google Nexus device, as they tend to get more reliable updates and easier to mess with by rooting.

Finally, the standard slate of un-deletable apps are present here. Half a dozen or so are T-Mobile included, but HTC has included a lot of apps on its own that may or may not suit your fancy. We like some of the basic apps like Task Manager and Flashlight, but Polaris Office, Qik video chat, and TeleNav GPS Navigator don’t do much for us. Either way, there are hundreds of thousands more apps on the Android Market.

The camera on the Amaze 4G may be its namesake. Like the MyTouch 4G Slide before it and the upcoming HTC Titan, the Amaze 4G has an awesome 8-megapixel rear camera. It automatically focuses on objects quickly and its shutter speed is only rivaled by the HTC Titan and iPhone 4S. The flash even defeats low-light scenarios well, managing to illuminate objects while retaining a lot of their color — certainly more than a lot of point-and-shoot camera. The 2-megapixel front camera isn’t bad, either.

The only problem we have with the rear camera is that it can be a bit hyper at times, constantly auto-focusing on its own and sometimes snapping a pic before it actually focuses on an object. These deficiencies are overcome by familiarity with the device, but we can see a lot of bad pictures being taken at rapid speed before users get the hang of it.

Video recording is now slightly easier thanks to the aforementioned video recording button. We cannot remember another phone with both a camera and video button, but they’re here. Video recording is fairly stable and can be done at up to 1080p quality. We haven’t have issues with jittery video.

Call quality is about as good as our current voice network allows, as is the case with a lot of smartphones. When carriers finally begin upgrading voice calls to their data networks, quality may see a big improvement. In any case, we had no problems hearing or being heard on the Amaze 4G.

Data speeds on T-Mobile’s network can be good, fantastic, superb, or horrible here in Manhattan, New York. We’re unable to figure any patterns out. Sometimes we were getting 10Mbps download speeds, and other times we were under 1Mbps. It’s completely erratic. However, we don’t think the Amaze is to blame for this. T-Mobile just doesn’t have its HSPA+ network up to snuff yet. Right before publishing this review, we were getting 3.5Mbps download speeds and 0.5Mbps upload speeds.

Battery life doesn’t amaze. Like a lot of new dual-core phones, the 1,730mAh Amaze battery drains quickly when you play media, use Wi-Fi, or continually use the HSPA+ 3G network. For one reason or another, our Amaze 4G tended to drain battery quite quickly even when completely idle, which was frustrating. We expect that you’ll have to charge this guy every night, as seems to be the sad norm developing with smartphones. The Samsung Galaxy S II and Motorola Droid Razr both outperform the Amaze on battery life.

The battery life is not stellar, but everything else about the Amaze 4G is pretty great. While we’re not sure it’s actually worth $60 more than any other dual-core phone, the Amaze holds its own and excels when it comes to taking pictures and video. We hope that HTC updates this device to Android 4.0 (Ice Cream Sandwich) as soon as it’s available, but until then, the Amaze is a great choice for T-Mobile subscribers and highly comparable to the Samsung Galaxy S II.