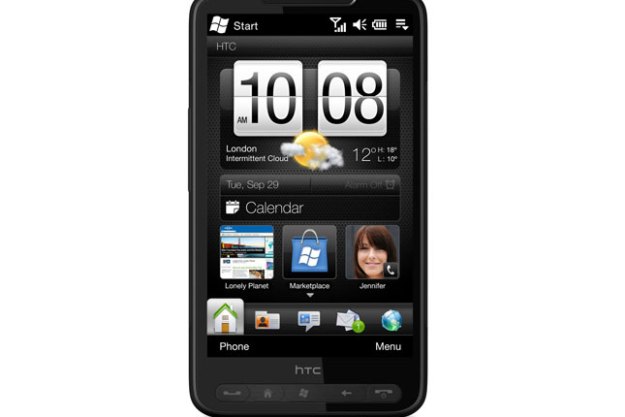 “HTC’s 4.3-inch behemoth proves bigger really is better – until you weave Windows Mobile 6.5 into the mix.”

HTC’s HD2 from T-Mobile, with its glossy 4.3-inch display and Blockbuster download capability, is about as close to a personal multimedia device as a cell phone can get. Too bad it has the wrong operating system: the nearly obsolete Windows Mobile 6.5 Professional sugar-coated with HTC’s Sense. Yes, the HD2 is chockfull of lovely technologies, but can all its wonderful multimedia capabilities peacefully co-exist in a heretofore touchscreen unfriendly operating system?

The HD2’s charcoal gray metal casing looks and feels more elegantly professional and just as sleek as the iPhone, but it also gives the phone a bit more heft – 5.54 ounces, which can embarrassingly sag a dress shirt’s breast pocket. It’s also devoid of perimeter buttons. There are five familiar controls – send, home, Start, back and end – beneath the 4.3-inch, 480 x 800 capacitive touchscreen, and only a nearly flush volume toggle on the left spine.

Inside, you’ll find Windows Mobile 6.5 Professional, inadequate and overblown when it first came out, and likely already on its way out, if Microsoft’s Kin phones and the varying Windows Mobile 7 previews we’ve seen are any clue. HTC has sensibly overlaid WM6.5 with its Sense OS, which greatly smoothes over WM’s myriad annoyances. But why use two operating systems when one (Android) would have done the trick?

Other than this double OS, HD2 is a cornucopia of multimedia fun: Windows Media Player and an FM radio, both an Opera Mini and IE browser, connection to T-Mobile’s growing 7.2 Mbps 3G network, a 5-megapixel camera with dual-LED flash, default high-quality YouTube videos, all powered by a 1GHz Snapdragon processor. Most innovative is the Netflix-like Blockbuster application, from which you can rent or permanently download full-length movies.

What’s not inside is memory – only 448 MB of RAM and 512 MB ROM as listed. Yet our test unit told us we had 690 MB of memory. That’s not a bad thing, just curious. However, the phone comes with a 16GB microSD card pre-installed.

Only two ports dot the outside of the HD2: the microUSB connector and the 3.5mm headphone jack. Both are located side-by-side at the bottom of the phone, leaving the rest of the perimeter unmarred.

The HD2 boasts both an excellent MP3 player and an FM radio for music, its raison d’être is video, with the Blockbuster app in the starring role.

Once we managed to crawl through the labyrinthine signup, we were able to download Clint Eastwood’s 134-minute Invictus in 13 minutes, while Guy Ritchie’s 128-minute Sherlock Holmes filed in at 25 minutes, both over Wi-Fi. You can’t use T-Mobile’s network to download movies, and you’d best plug the HD2 into AC – one download drained around half the remaining power.

Slower-moving character studies are easier to watch, but even on this phone’s big screen, quick-cut action movies like Transformers are hard to follow. The bigger problem is that the app infuriatingly doesn’t remember where you stopped watching; once you exit the movie app, the film starts from the beginning, and it’s ridiculously difficult to find the exact spot where you left off.

Not even Sense can save the app from Windows Mobile’s mindless meddling. While trying to pick up from where we left off in our fully legal paid download of Invictus, we were told we had to acquire a Windows Media license to watch it, despite already legally watching the first two-thirds of the film. We were then sent to a Web page to sign into – wait for it – CinemaNow, even though we had rented the film from Blockbuster. (Yes, we know Blockbuster bought CinemaNow, but who cares – we rented the film from Blockbuster, and everything ought to be labeled Blockbuster.) CinemaNow, however, didn’t like our Blockbuster user name and password. We couldn’t finish watching Invictus, and have no idea where to go for a refund – Microsoft, HTC, Blockbuster, CinemaNow? People may complain about Apple’s closed iPhone ecosystem, but at least one knows where to go to get relief.

Like many large LCDs, the HD2’s display is highly reflective, which can detract from video viewing. But considering the aforementioned issues, this high reflectivity is the least of HD2’s OS and movie app troubles.

Like many of these sophisticated smart multimedia phones, voice quality seems to have taken a back seat with the HD2. Voices sound tinny and hollow, without enough volume to overcome moderate ambient noise. There’s not nearly enough volume to listen to a movie sans headphones.

You know when you’re in trouble when a phone needs two operating systems. HTC understands that Windows Mobile 6.5 is a mess, and has somewhat civilized it with its HTC Sense.

Sense’s humanizing influence is apparent from the splash screen; You get the weather (with neat weather effects, like rain drops being swept away by animated windshield washers) and icons for three apps. Swiping up, the weather folds back like the side of a cube, revealing icons for nine apps, the selection and sequence of which you can customize.

But then we’re back to Windows. To get to all apps, functions and settings, you have to go through the Start menu and scroll down the usual long parade of confusing Windows Mobile icons. One of the default apps is Windows Marketplace, where you can buy Windows Media apps. Fine, except – you are prompted to first download the Marketplace app! Any new apps are loaded to the bottom of the single Start menu page, exhibit A why the iPhone and Android went to a multi-page model.

Another problem with two operating systems is that twice as many things can go wrong. For instance, the unlock slide on the lock screen also lets you know how many new e-mails you have waiting. But occasionally the slide wouldn’t unlock the phone, which meant we had to pry off the battery cover, remove the battery and reboot the phone. And we still got those occasional annoying pop-up Windows notifications about connections happening or not happening that then had to be dismissed.

The phone’s e-mail app is both functional and fun. You can scan your inbox via the usual scrollable list, or you can have your e-mail stacked like a virtual paper pile, and dismissively swipe each read or replied-to missive right off the screen.

One vast Sense improvement are its home screen tabs. This scrollable horizontal bar at the bottom of the screen contains quick link icons for up to 14 apps and functions. Unfortunately, you can only choose to display icons from among these 14, which include your contact list and messaging, and no others. We desperately wanted to add “camera” to the tabs bar, since there is no physical camera key or shutter, but it’s not one of the 14 choices.

There is, thankfully, a dedicated phone key so you can get to the phone function quickly. The dial pad seems a bit squashed, but still roomy thanks to the HD2’s generous screen real estate, to accommodate the iceberg-tip of your Outlook-imported contact list above it.

At 4.74 inches long, HD2 is taller than most phones. Good for the generous screen area, not so good for landscape typing. I have medium-sized hands, and we found ourselves awkwardly stretching our fingers to thumb-type in landscape – which isn’t always available, either.

As with all T-Mobile phones, Web speed depends on location, if you’re lucky enough to be in the carrier’s comically incomplete 3G coverage area. But even in 3G or via Wi-Fi, pages loaded ridiculously slowly, taking six to seven seconds for mobile-specific sites, and twice as long for standard Web pages. EV-DO delivers the same content in three to five seconds.

Opera Mini is the default browser, but Internet Explorer is available. You get multipage browsing with each, but Opera doesn’t always default to the mobile versions of sites; It did for ESPN and The New York Times, not for CNN. Stick with the Opera browser, though. Opera loaded pages faster and cleaner than IE, which partly accounts for it being the default browser. (That whole anti-trust business is probably the main reason.)

For a cellphone, HD2 takes magnificent photos, possibly the best we’ve seen since the oddly ill-fated Kodak-Motorola Motozine ZN5 and the Sony-Ericsson C902, both of which were more like cameras with a cell phones attached than vice versa. Although lacking in edge detail like most cell-cam photos, images are bright, pop-out colorful, and as long as you keep the phone stock-still, the flash brilliantly illuminates indoor scenes. However, with a touchscreen shutter release, it’s very difficult to keep the phone as still as necessary to get an unblurred shot in anything but bright sunlight.

Photos in the photo gallery automatically orient themselves to fill the screen – no need for the accelerometer – and you can pinch to zoom.

While not high-definition, HD2’s VGA video also is spectacular for a phone, with nary a trace of the usual pixelization, even when blown up on a 27-inch iMac screen. Be advised, however, that video can be captured only in landscape mode; Footage shot in portrait will end up sideways.

-This sample footage has been compressed for web.

HTC rates the HD2 for 6.3 hours talk time and eight hours of video playback, which is pretty impressive given its large screen.

Impressive, yes, and probably the best video-watching 3G phone on the market not made by Apple (soon to be surpassed by Sprint’s 4G EVO on June 4). But fighting with Windows Mobile, even with HTC Sense chaperoning, is simply not worth the effort. Stick Android on this puppy and you’ve got something.

Topics
Video-editing app LumaFusion to get a Galaxy Tab S8 launch
Google Pixel 7a: release date, price, specs, and all other rumors
The Nothing Phone is finally coming to the U.S., and I can’t wait
OnePlus 11’s controversial design returns in new ‘official’ renders
Samsung Galaxy S23: release date, specs, price, and all other rumors
Update your Google Pixel 7 now for three big security and audio features
Today’s best deals: TVs, laptops, iPads, robot vacuums and more
It’s 2022, and customizing my iPhone is still horrible
Best over-the-counter hearing aids for 2022
Save $70 on the Fitbit Versa 4 when you buy it today
My favorite phone of 2022 didn’t come out this year — it’s from 2021
Twitter’s downfall made me look for alternatives, but they just made it worse
Apple Music Sing brings karaoke singalongs to iPhones, Apple TV