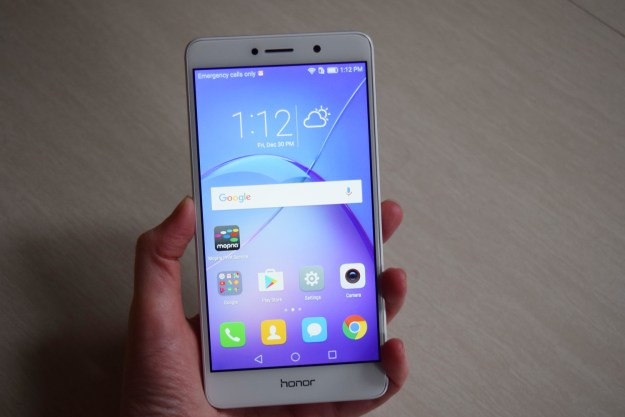 “The Honor 6X has a solid camera for a budget phone that even does reasonably well in low-light.”

Budget phones used to be bland, plastic devices with limited specs and crappy cameras. Not anymore. These days, you can get a gorgeous, all-metal phone with a reasonably powerful processor and solid camera for $250. That phone is the Honor 6X, a 5.5-inch budget phone made by Huawei’s sub brand.

We’ve been using the Honor 6X for about a week, and the only thing cheap about this phone is the price.

Last year’s Honor 5X was an attractive budget phone with its brushed, all-metal body. The Honor 6X refines that stylish design with a silky smooth metal body. There are subtle plastic inserts on the top and bottom of the phone for antenna signals, but they blend in with the phone’s metal body.

The sides gently curve to rest perfectly in your palm, and there are no sharp edges. There is a volume rocker above the power button, a fingerprint sensor on the back, a Micro USB port on the bottom, and a MicroSD and SIM card slot on the other side of the phone. The only standout feature is the dual camera centered on the back of the phone. Honor offers a few color options, including silver, gold, and gray.

The Honor 6X is bigger than the 5X with a 5.5-inch 1,920 x 1,080-pixel screen. Even though the screen is phablet-sized, the phone itself is amazingly compact. You never feel as if you’re reaching wildly across the screen when you use it one-handed. It’s quite slim and light at 8.2mm and 162 grams.

Overall, the design is very simple and sophisticated. It looks and feels nearly as high-end as any iPhone. In contrast with its main competitor the Moto G4 Plus, the it looks absolutely stunning — the best-looking budget phone we’ve seen in a long time.

Mid-range specs on a budget

It’s a budget phone, so you can’t expect award-winning specs, but the Honor 6X is powerful. Huawei’s Kirin 655 processor powers the phone along with 3GB of RAM. The processor is more or less the equivalent of Qualcomm’s Snapdragon 650 chip. In real-world use, that translates to smooth performance with next to no lag.

For those of you who insist on seeing benchmark results, the Honor 6X managed to get 378 on the 3D Mark Sling Shot Extreme benchmark test. In contrast, the Moto G4 Plus scored just slightly better with 384 points. That’s a very good sign for the 6X’s Kirin chip, and it’s a huge improvement over the score of 103 that the Honor 5X scored last year.

Honor packed 32GB of storage into the Honor 6X, but it’s expandable up to 128GB via a MicroSD card slot. It’s a decent amount of storage for a phone these days, and it’s nice that you can add more if you need to do so.

The 3,340mAh inside the 6X easily lasts a day and a half, and you can juice it up in about two and a half hours. It offers decent battery life, though we do wish quick charge technology was included.

Honor really outdid itself with the camera setup on the 6X. Honor’s parent company Huawei has been popping dual-camera modules on many of its phones lately, and the 6X has one, too. It’s less powerful and refined, but it still offers the blurred background effect called bokeh and a professional manual mode.

The rear camera setup includes a 12-megapixel sensor and a 2-megapixel sensor with a wide aperture range from F/0.95-F/16. There’s also an 8-megapixel front-facing camera on the device. Both take sharp, clear pictures with fine detail and color balance. Some shots look cool or bluish, but usually, the resulting image is quite realistic.

It’s a solid camera for a budget phone that even does reasonably well in low light and at night, though it does tend to blur if you move too much, because the shutter speed slows down. For steady shots at night and some of the light painting effects, you’ll want a tripod. Although the Honor 6X won’t challenge the iPhone, Galaxy, or Pixel for best smartphone camera any time soon, it’s still impressive given the price point.

If you want to get creative, Huawei’s popular camera modes are just a swipe away. You can choose between wide aperture mode, professional mode, food mode, perfect selfie, beauty mode, panorama, and HDR. Other more offbeat features include the option to add a watermark, make an audio note, or capture a document.

Emotion UI isn’t for everyone

Huawei’s heavily customized version of Android, Emotion UI (EMUI), runs on the Honor 6X. We tested the phone using a beta version of the latest update, which added Android 6.0 Marshmallow, The result is something that looks more like iOS: there’s no app drawer, the colors are more pastel, and the notification shade is very different. The Honor 6X comes with a couple dozen pre-installed apps, but some of them can be uninstalled.

If you like pure Android, Emotion UI will likely annoy you. However, if you’re familiar with the iPhone, you will feel right at home. It looks dated, but some of the additional features are neat. For example, you can use the fingerprint sensor to take a photo, answer a call, stop an alarm, show your notification panel, or browse through photos.

Emotion UI is one of the better user interfaces we’ve come across. It works well, doesn’t drag the phone down, and the changes from Google’s version of Android are not too annoying. Unless you’re an Android purist, you’ll be completely fine with Emotion UI.

Honor offers a limited one-year warranty, which doesn’t cover accidental or water damage. If your phone has a defect or problem, Honor will repair or replace it for you.

The only thing cheap about this phone is the price.

Should you run into any problems with your phone, you can get support via a phone line or live chat on the Honor Community site. There is also a support app right on the phone, which connects you to a customer service representative instantly or allows you to send a message to one.

The Honor 6X is supported by updates, but they are not quick. It is running Android 6 Marshmallow (2015) and it will likely receive Android Nougat (2016) in the spring. However, it does have the latest December Android security patch, which is a positive sign for security. There are also reports that Nougat will soon be ready for many recent Honor and Huawei phones.

Budget phones just keep getting better and better. The Honor 6X is tied for first place in the $250 phone category with the Lenovo Moto G4 Plus. Its slick design and special camera tricks heighten its appeal, but a non-stock Android experience may put some buyers off.

The Honor 6X’s biggest competition is the Moto G4 Plus by Lenovo. If you prefer stock Android, you’ll want to get the G4 Plus instead. However, if you like Emotion UI’s retro iOS look, the 6X may be the better buy. Its metal design is more appealing and premium and its dual-camera tech and manual mode work well. It’s a real toss up between these two.

The Honor 6X should last you at least two years. Its specs, though mid-range, are respectable, and its aluminum design is very sturdy. The only worry here is software updates, but Honor says it will be updated to Nougat in the spring.

Yes. If you’re on a budget and you’re okay with an iPhone-like user interface, the Honor 6X is a great buy.