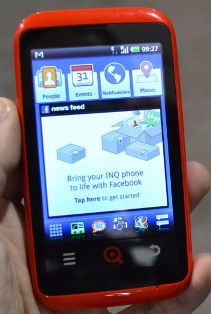 Facebook can deny its rumored phone all it wants, now there’s video footage. INQ exec Andrew Bennet paid a visit to TechCrunch today and offered an up-close demo of the INQ Cloud Touch, an Android-based smartphone optimized for the social network on all levels. Facebook is fully integrated into the phone’s layout and functions: For instance, your News Feed and friends’ status updates are immediately available on the home screen, and the phone focuses on your “top friends,” bringing you their updates in an easily accessible widget.

We reported last month that Facebook and INQ were collaborating on a phone, and also wondered whether the INQ Spotify device was the same product. Looks like we were right. In the demo, Burnett shows off the phone’s Spotify music player, which nudges out Android’s custom music application. For months now, Facebook has vehemently denied it’s working on a phone, which really just boils down to the fact that it’s not manufacturing its own branded device. But this thing is short one Mark Zuckerberg portrait from being called a Facebook phone. Still, some sources aren’t convinced Facebook isn’t still working on its very own mobile product.

According to Bennet, the phone features an Android OS with a Facebook layer. Its four main applications are the familiar Facebook People, Events, Notifications, and Places logos, and you can guess where those take you. Your closest friends are determined by Facebooks open graph, and their updates are logged specifically.

The phone basically draws as much information as it can from Facebook’s open graph to fill in applications like your address and phone book, instant messaging contact list, calendar, and so on. For example, your calendar references Facebook events and birthdays that are then added to your native Google schedule.

INQ will also introduce a model with a full QWERTY keyboard, the ING Cloud Q, which is still in development. The Cloud Q and Cloud Touch will launch in the UK in May, and its stateside debut is slated for, oh…let’s say…whenever it can convince a US carrier to pick it up.

Facebook might be treading on e-mail’s territory, but it certainly isn’t going to steal too many smartphone users. It’s blatantly marketing the phone towards teens and young adults whose pockets aren’t terribly deep – with some carriers’ contacts and subsidies, it may be only $50. Without, however, it’s possible it will cost you $250 – pricing and a specific launch date have yet to be confirmed.

According to TechCrunch, Facebook is still working with HTC on its own phone optimized for the social network. For now, check out the video of the INQ Cloud Touch below.

Here’s a look at the specs leaking out about the Cloud Touch and Cloud Q. The Cloud Touch has a 3.5-inch HVGA touchscreen display, 4MB of memory, a 5-megapixel camera, and a 600MHz Qualcomm MSM7227 processor. The still-in-development Cloud Q will sport a 2.6-inch display along with its slide out full QWERTY keyboard. Both phones will run Android 2.2.

iOS 16: everything we know about Apple’s next big iPhone update