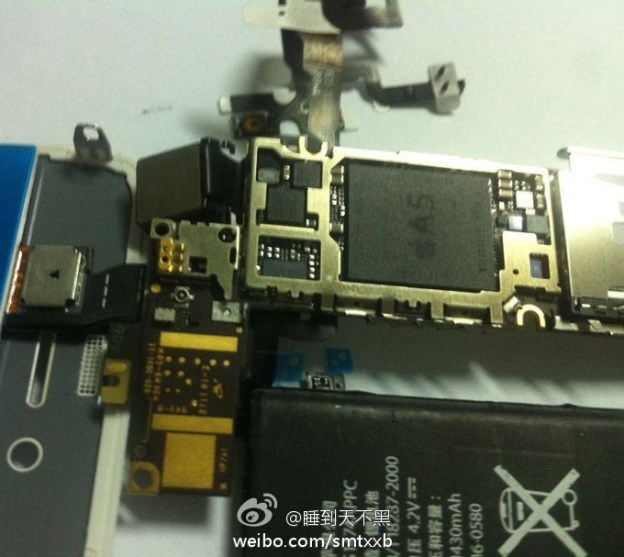 It’s been at least five or six hours since the last iPhone 5 rumor, so we figured we were over due to report on yet another juicy rumor.  A few new pictures have surfaced that might show the chipset of the iPhone 5 or 4S.  What we see in the picture is an Apple A5 processor or at least that is what we are lead to believe with the Apple logo on the chip.  With rumors swirling about an iPhone 5 and low-cost iPhone 4S it isn’t clear which device these internals belong to.

When compared to current iPhone 4 and iPad 2 guts the structure of the circuitry more closely match the iPhone 4 so it is unlikely that this belongs to different version of the iPad.  It is completely possible that the pictures are from a modified iPhone 4 with an A5 chip given to iOS game developers.

The only other information we can really get from the pictures is the size of the battery, which appears to be 1430 mAh.  The original iPhone 4’s battery was rated at 1420 mAh, so while different, still very close.  If rumors of an iPhone 5 with a larger screen are to be believed we sure hope the battery would be slightly larger.  This makes us feel that if these pictures are in fact real that it is most likely for a smaller cheaper version, like the rumored iPhone 4S.

Even though one of the oldest, and believed, rumors surrounding the iPhone 5 is the fact that it will have an A5 chip, any bit of evidence to back up those claims is helpful.  It is expected that an official announcement out of Cupertino should be coming by the end of the month, or early October so we have a few more weeks for even more information to leak out.