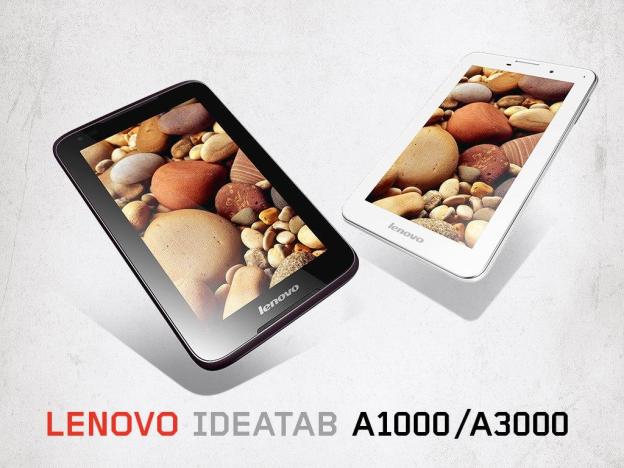 Check out our review of the Lenovo IdeaTab A1000 tablet

Looking for more affordable tablet options? Thankfully, they are so commonplace nowadays, the real trick is figuring out which one to choose. Well let’s throw another couple into the mix to help shake things up, shall we?

Yesterday, Lenovo posted a photo on its Facebook page announcing the launch of two new tablets, a part of its IdeaTab A Series. The two 7-inch tablets – the A1000 and A3000 – retail for $230 and below. Both are now available for sale on Lenovo’s Web site.

The A1000, which retails for $190, runs on Android 4.2 Jelly Bean and is powered by a MTK MT8317 1.2GHz dual-core processor. Don’t look for a quality camera on this one; it only has a mediocre, webcam-quality front-facing camera. It also has a Micro USB port, 16GB internal storage with a microSD slot that can support up to an additional 32GB, a battery that lasts up to 8 hours, and weighs just under 0.8 lbs.

The next level up, the A3000, runs on the same OS, but is powered by an MTK 6575 1.0GHz dual-core processor. The front-facing cam is the same at the 1000, but this one also comes with a 5-megapixel rear-facing camera. It also comes with 16GB internal storage, but its microSD slot allows for expansion up to 64GB. It weighs slightly more, at .8 lbs. and, while many of its specs supersede the cheaper model, the battery life on this is slightly shorter, at just 7 hours.

Lenovo has one more tablet in its A Series, which is not yet available for order. While pricing on this one is not yet available, based on its name (A2107) and specs, it should price somewhere in the middle of the others. It will, for some reason, run on an older version of Android (4.0 Ice Cream Sandwich), and come in two models – one Wi-Fi and one 3G – and have the same webcam, with a 2-megapixel rear-facing shooter. Internal storage options are 8GB and 16GB, and a microSD slot will allow for expansion, though we’re not sure of the capacity.

Lenovo hasn’t commented on when this model will be made available, but the former two models are available now, to ship in another week or so. A1000 orders completed by June 12 will also receive an automatic 35 percent off, reducing its price to $150.