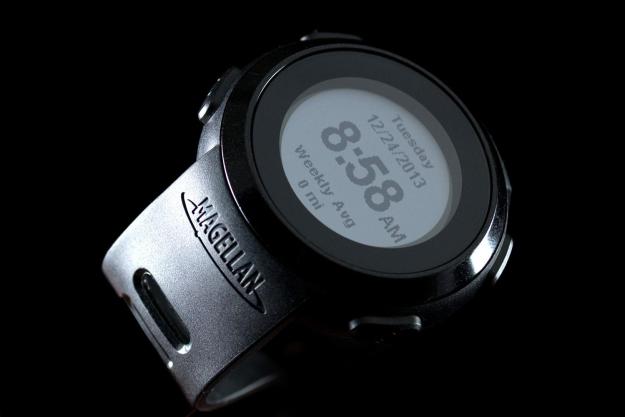 “For runners and cyclists living in Apple’s iOS ecosystem, the Magellan Echo is a solid option that covers both bases.”

Sometimes the most difficult part of a walk, run, or ride is getting our phones out to see how fast we’re going, how far we’ve gone, or how long we’ve been out. That’s where the new Magellan Echo comes in. The Echo acts as a remote control for a fitness app running on an iOS device and “echos” the data screen from the phone to the watch. This cleverly allows users to check their metrics while they’re on the go without having to twist an armband, or dig a phone out of a pocket or pack. The watch can also stop and start the music playing on an iPhone. The Echo is a great idea for people who like exercising with their iPhone fitness apps, but still want the convenience of a data watch.

The Magellan Echo is a round-faced plastic sports watch that comes in three color schemes: orange and white, blue and white, or all black. It features a plastic watch face, four buttons (two on each side of the watch) and a rubberized plastic strap with a wide metal buckle. While Magellan says the watch can be worn in rain and even in the shower and that it is reportedly “water resistant” to 30 meters, the watch it is not “suitable for swimming.” The Echo runs on one CR2032 coin cell battery, so it never needs to be plugged into a charger like some running watches.

Because the Echo runs on a watch battery and communicates via Bluetooth Smart, there is no need for a USB cord to plug the watch into anything.

The Echo’s watch face and setting can be completely customized via the Echo Utility app for iOS, which talks to the watch via Bluetooth Smart. Customizing features include the choice of a digital or analog watch face, setting the type to be black against a gray LCD background, or inverted so the type is gray and the background is black. The app also allows users to choose time and date formatting options on 12- or 24-hour time, four different month, day, and year layouts, and whether the week begins on Sunday or Monday. The Echo Utility also includes a language setting and a link to a support page (which is nice to have).

After connecting to the Echo Utility app for setup, the Echo can talk with a number of compatible fitness apps to reflect real-time fitness data, control the fitness app, receive notifications, and start and stop music on the device. The Echo is currently compatible with Apple iOS devices including iPhone 4S through 5S, fifth-generation iPod Touches, iPad minis, and even third- and fourth-generation iPads (though we doubt anyone is going to run with them). Magellan says that support for Android smartphones is “coming soon.”

Compatible fitness apps include Strava Bike, Strava Run, Wahoo Fitness, iSmoothRun, and Under Armour’s recently acquired MapMyRun. Each of the apps offers its own unique functionality to the watch.

The Magellan Echo we tested arrived with the watch, and that’s it. Because the Echo runs on a watch battery and communicates via Bluetooth Smart, there is no need for a USB cord to plug the watch into anything. Magellan also sells the Echo packaged with a Bluetooth heart-rate monitor.

The Echo runs on Wahoo’s RFLKT API (kind of a standard for fitness sensors communicating with phone apps over Bluetooth) so each fitness app works with the watch in slightly different ways. Because we practically live on Strava, we decided to test the watch with Strava’s Run app. The Echo can operate with both the Run and the Cycling version of the app.

Having learned the finicky nuances of Bluetooth Smart the hard way, we now have a checklist when it comes to pairing devices with our phones. First, we make sure the latest version of the software is installed on our phone. Then we manually turn off any apps that may have been using Bluetooth. This is an important step, as it seems Bluetooth often gets confused when it comes to device pairing. Once everything is turned off, we restart Bluetooth on the iPhone and consider it ready for pairing.

Setting the Echo up for Bluetooth pairing was straightforward. We simply pressed and held the top left button until a hand getting ready to shake hands appeared on the watch face above the word “Searching.” Then we launched the Strava app and waited until the two were paired. The first time the Echo pairs with an app, it will ask if you’d like to pair with the phone. Pressing the bottom right button accepts, and pressing the bottom left button cancels the pairing.

It is impossible to check the Echo’s current time and date screen without unpairing the watch from the phone.

Once the watch and the app are paired and synced (sometimes this process can take up to 15 seconds) three lines of data appear on the watch face. The Strava Run app displays distance, run time, and pace, while Strava’s cycling app displays distance, ride time, and speed in miles per hour. Starting a run (or ride) is as easy as pressing the bottom right button. To pause an activity, you push the same button. Getting the music to play, however, requires getting it started first on the phone the old fashioned way. Once the music is playing, stopping and restarting the audio is controlled with the Echo’s top right button.

While the Echo can be used as a daily wear watch, we found its functions a bit on the Spartan side. The Echo shows only the time and date, and that’s it. Once synced with Strava, it also displays a weekly average in miles at the bottom, however, there is no alarm, no stopwatch, and no timer. It seems like it wouldn’t be pretty easy to add those functions without sacrificing anything.

There is no doubt about it: Smartwatches are coming. For runners and cyclists living in Apple’s iOS ecosystem, the Magellan Echo is a solid option that covers both bases. It would even work well for hiking. However, the watch’s susceptibility to water and lack of functions when it’s not paired relegated it to an occasional-use watch for us. That might not be a problem if you only intend to use it for exercise, but for the price we would expect it to serve both roles. Otherwise, the watch does exactly what it was designed to do and does it well. If it had a few more basic functions, we’d probably wear it all the time.