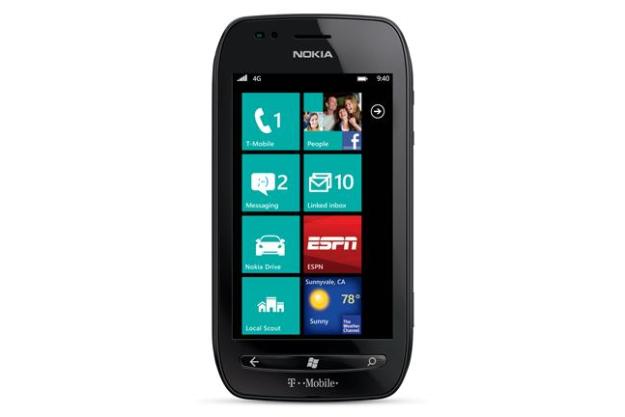 “If saving a bit of money now is important, the Lumia 710 is a good phone for the price.”

T-Mobile is fast becoming a great place to be for a good Windows Phone. A couple months ago, the carrier released the HTC Radar 4G, one of our favorite Windows Phones, especially at its $100 price. This month, the Lumia 710 joins the family. It represents the first device in Nokia’s 2012 effort to re-enter the US smartphone market — this time with Windows Phone. It’s also one of the most affordable Windows Phones yet. We examine if the sacrifices are worth the low price.

When choosing a Windows Phone on T-Mobile, there are only two choices: the HTC Radar and the Lumia 710. Currently, the Lumia is about half the price of the Radar. Part of that price cut comes out of its design and materials. Unlike the Radar, which has a brushed metal shell with white plastic highlights, the Lumia 710 is completely plastic with a rubberized back. It also comes in two color variations: white (with black back) and all black. It’s also a bit smaller, with a 3.7-inch screen instead of a 4.0-inch screen. The 710 is definitely not as sexy or comfortable to hold as the Radar, but compared to many Android devices, it holds its own.

The 710’s design makes it a bit easier to hold than some phones. The back shell, which is removable and replaceable, gently curves upward toward the screen and protrudes outward a bit, giving your fingers a good place to grip the phone without having to touch the screen.

All of the buttons are on the right (starboard) side of the phone. The power button rests on the top upper right, followed by a volume rocker on the right and then the camera shutter button on the lower right of the phone, which is more accessible when the phone is tilted into landscape orientation. The three standard WP7 navigation buttons (Back, Menu, Search) are in their usual place, but are actual clicking buttons instead of the touch-haptic navigation buttons we’ve been seeing on phones in the last two years. This is nice, in a way, but because all three buttons are formed from a single piece of plastic, we found them a bit hard to press. The volume and camera buttons are even more difficult to press because they’re built into the removable battery cover and don’t stick out enough. They don’t have a satisfying click to them. The power button was easy enough to press, though it was a bit small.

The micro-USB and headphone jack are both on the top of the phone, next to the power button. The battery and micro SIM (this doesn’t take a standard-sized SIM) are both accessible by removing the back plate. There is no microSD slot.

The main speaker is on the back of the phone, at the bottom. It was surprisingly powerful for a phone of this size and price.

Overall, the Lumia 710 is not one of the most comfortable phones to hold, but it’s small enough that almost anyone can hold it. You’ll likely get used to the device’s button quirks after a few days use. They shouldn’t cause any massive headaches.

If you want to know the specs of the Lumia 710, you could look at almost any other Windows Phone’s spec sheet and be 90 percent right. No major innovation in processing power has occurred. The 710 has roughly the same processing power and specifications of the Radar. It runs on a 1.4GHz single-core Qualcomm MSM8255 processor and has 512MB of RAM, 8GB of internal storage (6.5GB are usable), and a 480 x 800 pixel screen. It has no front-facing camera, but does have the standard proximity sensor, magnetometer, ambient light sensor, accelerometer, two microphones, and GPS built in.

Like the Radar, the Lumia 710’s screen is LCD, not AMOLED. The latter is preferable on a Windows Phone because of how many basic colors the OS uses and how much brighter they appear on AMOLED. Still, LCD isn’t terrible, and if you choose a white background, LCD actually provides a much better experience than AMOLED (we recommend the white 710). AMOLED screens look great with black backgrounds because the technology actually allows the black pixels to turn off completely, whereas LCD pixels always produce a bit of light, even when they’re darkened to black. This makes LCD look a bit more washed out than AMOLED. Still, this is the price you pay for a budget phone. AMOLED is still very much a premium screen technology.

Finally, we like the Gorilla Glass screen on the 710, but it tends to attract fingerprints more than most phones. This is nowhere near as bad as the HP TouchPad or Toshiba Thrive tablets that came out last year, but it does mean that your phone screen will look a tad grody at the end of the day. We hope Nokia invests in better fingerprint repellant coatings on all of its future devices (we haven’t had this problem with the Lumia 800, which is good).

All Windows Phones now run Windows Phone 7.5 (Mango), and the Lumia 710 is no exception. Microsoft’s smartphone OS differs from the iPhone, Android phones, and BlackBerry quite substantially in that it has no notifications tray, manages resources quite well, and instead of having customizable homescreens of icons, Microsoft has created a new concept called a Live Tile, which is a square (or rectangle) which can act as a shortcut to an app, but can also display information. For example, your Gmail Live Tile may show how many unread messages you have, and the calendar will show your next upcoming activity. You can move tiles around the homescreen and even add Live Tiles to functions deeply embedded inside apps. For instance, we added a Live Tile of our favorite podcast, Radiolab, to our homescreen, giving us instant access to it.

If this sounds confusing, keep in mind that it’s easier to experience than to explain. Windows Phone is one of the best looking and most pleasant smartphone operating systems we’ve used. Like any OS, there are still a few issues, but we can safely recommend Windows Phone as a viable alternative to Android and iPhone.

Nokia’s devices may be the ones to have though, as it has started aggressively developing unique, exclusive apps for its phones. Nokia Drive, a full turn-by-turn navigation app, is available on the Lumia 710, as is an exclusive ESPN ScoreCenter app, and an app that highlights some of the best third-party applications available on the Windows Marketplace. Now, we definitely think that Google’s free turn-by-turn navigation is better than Nokia Drive, but Nokia Maps has improved a lot since we last used it on the Nokia N8. At CES, Nokia execs showed us some upcoming apps including one that uses augmented reality and your camera to guide you toward nearby places of interest. It’s clear that other manufacturers are going to have to step it up if they hope to compete with Nokia.

T-Mobile has also installed its usual Slacker Radio, T-Mobile TV, and My Account apps on the 710. They are removable if you don’t want them.

(As a side note, it is quite easy to change the crappy teal color Nokia and T-Mobile chose for the Lumia 710’s tiles. You can make them whatever color you want.)

While it sets no standards and breaks no records, the camera on the Lumia 710 gets the job done. We extensively compared it to the Lumia 800 and the Samsung Galaxy Nexus and found that it sometimes outperformed the 800 and while it didn’t capture the amount of color or detail of the Nexus, its pictures weren’t anything terribly bad for a point-and-shoot camera. Like the Galaxy Nexus, we did have a problem with the 710 taking pictures before it was fully focused. This may become a bigger problem as phone makers continue to try and outdo one another, each claiming to have the fastest shutter speeds.

The Lumia 710 did fairly well out in the city at night. It balanced the bright lights of Times Square fairly well and other poorly lit indoor areas. We weren’t particularly impressed with the video quality, but it was better than the Lumia 800, which seemed unable to focus on anything at all while recording video.

The best camera in mobile is probably still the iPhone 4S, but this phone holds up well against other Windows Phones like the Samsung Focus Flash, HTC Radar, Samsung Focus, and Nokia Lumia 800. It also isn’t far off from some of the more high-end smartphone cameras like the Samsung Galaxy Nexus and HTC Amaze.

Call quality is as decent as any other smartphone. We didn’t find calls to be particularly clear, but had no problems distinguishing people on speaker phone or being heard by other callers. T-Mobile’s 3G HSPA+ data network is still quite erratic in Manhattan, New York, where we normally test it. Our download speeds varied from 0.7Mbps to 12Mbps, with no real logic behind the huge changes in speed. Overall, speeds were on the low end of the spectrum, hovering around 1Mbps (Megabit per second). These speeds don’t compare well to any other major US network and are especially slow compared to Verizon, but if you’re a T-Mobile user, you probably already know that. Luckily, T-Mobile has some of the most affordable phone plans on the market.

Though the Lumia 710 comes with a smaller 1,300mAh battery (big Android phones now come with 1,800 to 2,000mAh), it seems to be plenty adequate for the little tike. We had no problems getting through a day without a recharge and in very light use, you can stretch it to two days. Battery life, of course, varies a lot by where you are living. If you have a poor T-Mobile signal, it will drain the battery, as will enabling features like Wi-Fi and GPS.

The Lumia 710 isn’t the best Windows Phone we’ve used, but it is usable and at $40 (online), it’s a better deal than many of the cheaper Android phones on the market. If you have the money, we’d recommend spending a bit more to buy the HTC Radar, or if you are on one of T-Mobile’s month-by-month plans, the Lumia 800 is available on the Web as an unlocked device. If saving a bit of money now is important, the Lumia 710 is a good phone for the price.