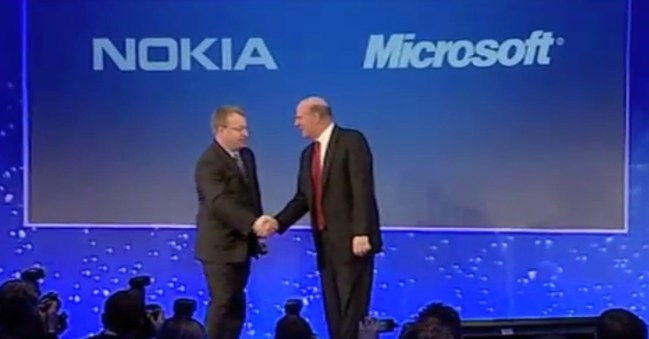 Did a little birdie tell you that Microsoft purchased Nokia’s phone division for $19 billion? Well somebody told the stock market, because shares of Nokia rose in response to these rumors, which have been circulating the net for a week or two now. While it probably likes the positive attention, Nokia has responded definitively to the rumor.

While Microsoft and Nokia are now working together as strong partners, little has changed since February when Nokia CEO Stephen Elop and Microsoft CEO Steve Ballmer took the stage to announce their collaboration on Windows Phone. Under the deal, which is outlined here, Nokia provides some of its mapping and local assets to Microsoft in exchange for a lot of cash and the ability to more tightly integrate Windows Phone 7 with its upcoming line of handsets. Nokia will get information on Microsoft advancements before other partners and will work closer to Microsoft, as an extension of its Windows Phone team. However, Nokia is also continuing to produce handsets outside of the partnership (as it’s not exclusive) on its Symbian OS, and will also produce a phone based on the MeeGo open source platform later this year.

If this rumor were true, it would be a strong sign that Microsoft was moving toward the more controlled hardware model Apple has always adopted and Microsoft has seen some success with on the Xbox and, to a lesser degree, the Zune. An exclusive partnership or outright purchase would be a bad idea. Such a large purchase of a troubled brand would also be risky for Microsoft as well, which recently purchased Skype for $8.5 billion.

We expect the first batch of Nokia handsets to run on Windows Phone 7 Mango, Microsoft’s upcoming upgrade to WP7, which is due out somewhere between August and November of this year.

Topics
Video-editing app LumaFusion to get a Galaxy Tab S8 launch
Your Phone in Windows 11 now shows recent apps
How to take a screenshot using a Microsoft Surface
Nokia’s new, cheap X100 gives T-Mobile customers 5G for just $252
There’s a HUGE SALE on Microsoft Surface devices today
A foldable iPad in 2024? This Apple insider is ‘positive’ it’s happening
How to sync your Outlook calendar with an iPhone
Secure Your Value: Lock in the price of your Verizon phone plan for 3 years
AirTag helps flyer find his AirTag – but not his missing wallet
Best Apple Deals: Save on AirPods, iPads, MacBooks and more
The Garmin Vivomove Trend is a powerful smartwatch with a sleek disguise
Anker’s newest chargers are a perfect pairing for the Galaxy S23
Best tablet deals: Save on Android tablets, iPad and more