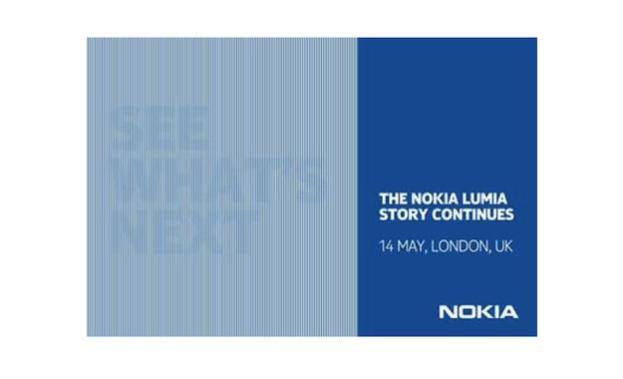 Nokia has called a press conference for May 14, and the invitation leaves us with little doubt we’re going to see at least one new Lumia phone announced. On the right side of the image, and almost completely obscured by a curtain-like effect, are the words, “See What’s Next,” but the real give away is, “The Nokia Lumia Story Continues,” printed next to it.

The invitation comes just a few days after the announcement of the Asha 210, and follows several months of intense speculation concerning several Lumia-branded devices. If your mind has leapt to the Lumia 928, which is believed to be a Lumia 920 variant headed for Verizon, this is unlikely to be its debut. First, the event is being held in London, and second, Verizon has planned a get-together at CTIA on May 22, which is a far more likely launch venue.

If the Lumia 928 is going to show up on May 22, and it does come wrapped in a new lightweight body – i.e. it’s a properly updated version of the Lumia 920 – Nokia may wish to out the international edition beforehand. It’s believed this is codename Catwalk, a Lumia phone said to have an aluminum chassis instead of one made from polycarbonate. However, as the Lumia 920 has only been on sale since late last year, it could be considered a little too early for its replacement to appear.

With that caveat in mind, what else could Nokia have ready for us? How about the Nokia EOS? This is the codename for the phone which we’re expecting to bring the 808 PureView’s 41-megapixel camera to Windows Phone, something which has been promised right from the start. It’s certainly exciting enough to warrant it’s own launch event.

One should also never forget the chance of a tablet from Nokia, and although it’s too early for the rumored Lumia phablet to be released, there’s a chance Instagram for Windows Phone could be; and that’s something which would fit in well with a camera themed event.

Nokia has decided to hold its event the day before Google I/O begins, so it does run the risk of whatever it launches being quickly overshadowed by any major Google announcements. It’s good news for us though, as May is shaping up to be an exciting month for tech fans. We’ll bring you all the news from Nokia’s press conference on May 15.

Video-editing app LumaFusion to get a Galaxy Tab S8 launch
Samsung Galaxy S23: release date, specs, price, rumors, and news
My iPhone 14 Pro camera is ruined, and it’s all Apple’s fault
This is the OnePlus Pad — the OnePlus tablet we’ve waited years for
The Galaxy Z Fold 4 isn’t just a good phone — it’s also my favorite computer
Is the Samsung Galaxy A14 5G waterproof?
The best fitness trackers in 2023: our 10 favorite picks
Watch the Galaxy S23 Ultra get unboxed a week before launch
The best iPhone apps in 2023: 50+ apps you need to download now
The iPhone 15 Pro’s rumored new design is one I can’t wait for
The best folding phones in 2023: our 6 favorite foldables right now
You can finally take ECGs and track AFib on a Garmin smartwatch
I bought a $50 Apple Watch Ultra clone, and it blew me away