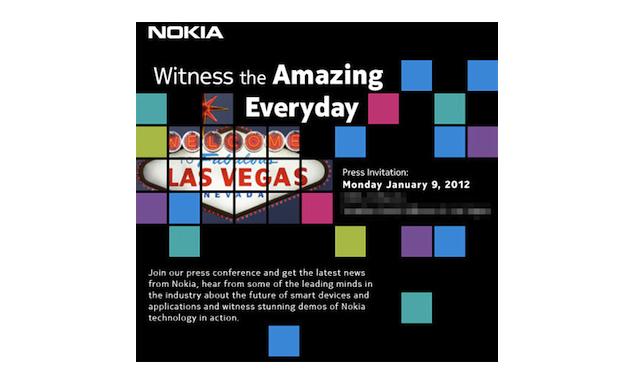 Nokia has begun sending out invitations to its CES press conference, like this one received by Engadget, of which the design and “Amazing Everyday” tagline suggests it’ll be focused on their new range of Windows Phone 7 handsets. This is a far cry from last year, when the Finnish company didn’t even attend the show.

At the time they didn’t have much to shout about, and even after the announcement of their partnership with Microsoft, there were no new products unveiled at Mobile World Congress a month later either. So Nokia needs to get their name back out there, especially in the USA.

It’s obvious then, that the event will primarily be about Windows Phone and software related to it. With T-Mobile already announcing that it would be carrying the Lumia 710, could we hear about the Lumia 800 or even the mythical Lumia 900? There’s also the chance Nokia will discuss a 4G LTE Windows Phone too, particularly after being told to offer one – or else – by Verizon, and reports of recent network tests of such a device.

The invite gives nothing away about the content, thanks to some very non-specific blurb, but all will be revealed on January 9 at 3pm PT, which is actually the day before CES officially opens.

iPhone lost in a river for 10 months reunited with owner, and it still works