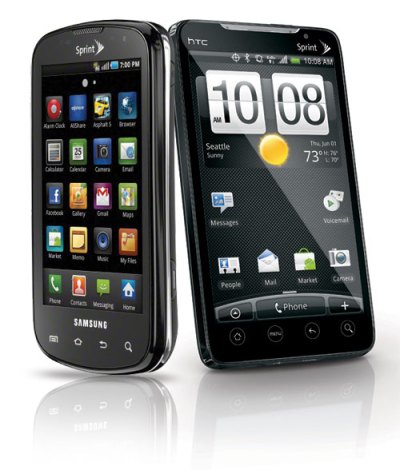 The first 4G phone in the United States finally has some competition. On August 31, Samsung’s Epic 4G arrives on Sprint, ending the EVO 4G’s nearly three-month run as the big man on campus. But is it actually a better choice? We stacked both superphones side by side to see which rules the 4G airwaves.

When it comes to power, neither phone is a slouch, but minor differences do manifest a marked gap between them. Samsung uses a 1GHz Hummingbird chip that shares a bloodline with the one used in the iPhone 4, while the EVO 4G uses a 1GHz Snapdragon processor. Which wins out when hummingbirds and dragons go to battle? The runty little bird powering the Epic. Check out AndroidCentral’s benchmark of the EVO 4G and Samsung Captivate (which has almost identical specs to the Epic 4G, but comes on AT&T) side by side. It averaged 55.1 fps to 42.9 fps in a gaming test, and turned in higher scores in the Neocore processing benchmark, as well.

What might be the greyest area in our comparison comes down to a matter of preference. With a 4.3-inch LCD screen, the HTC EVO 4G has both immense size and sunlight-resistance in its favor. With a 4.0-inch OLED screen, the Samsung Epic 4G looks like a glittering gem beside its super-sized HTC counterpart… but fades to a dingy bluish gray the moment you bring it out into the sun. Resolution on both models is an identical 800 x 480. While movie fans might prefer the Epic’s brilliant color, we’re awarding this one to the EVO 4G based on practicality.

We’ve said it before and we’ll say it again: Resolution does not make a camera. But in this case, the 8-megapixel camera in the EVO 4G really is a better shot than the 5-megapixel camera in the Epic 4G. Our test shots showed the Epic returning overly dark outdoor shots in comparison to the EVO 4G, even though they come closer to parity indoors. Small a difference as it makes, the EVO 4G also has a two LEDs for its flash, while the Epic gets only one.

Besides opening the door for faster Web surfing and services, the 4G connectivity has made it possible to make face-to-face videoconference calls without Wi-Fi. Both the EVO 4G and Epic 4G offer front-facing cameras to make it possible, but the EVO 4G once again outstacks the Epic 4G on resolution, offering 1.3 megapixels to its 0.3 megapixels (VGA). That said, it doesn’t pose much of a practical difference, considering bandwidth requirements will crush video quality down to a blotchy mess anyway. We’ll hand this one to HTC for the tech specs – with a bright red asterisk that resolution matters even less than normal here.

The EVO 4G taught us that you don’t go fast without burning a little gas to do it. The phone quickly earned a reputation for dismal battery life with heavy 4G use, and not surprisingly, HTC never posted official estimates for it. Funny thing: Neither has Samsung for the Epic 4G. While the manufacturers grin and shrug rather than delivering “official” battery estimates, our unscientific testing yielded about six hours of on and off use on the EVO 4G, and the Epic 4G performed very similarly. No surprise, considering they both use 1500 mAh batteries. Chalk this one up to a draw.

Judging by the screen size, you might expect the EVO 4G to be a juggernaut beside the Epic 4G. Not the case. Amazingly, the EVO 4G is actually shorter and thinner than the Epic, but just a hair wider(2.6 inches to 2.54 inches). It’s also heavier, though, weighing 6.0 ounces to just 5.46 on the Epic. The tight margins make this one too close to call.

The Epic 4G comes with a 16GB microSD card installed, the EVO 4G comes with only 8GB, and they both support up to 32GB. What’s there to discuss? You could upgrade the EVO 4G to 16GB for just about $30 these days and have a spare 8GB card to spare, but out of the box, the Epic 4G is the clear winner. Those dollar signs do bring us to our next point, though…

Typically, price zeros out and becomes a nonissue in our side-by-side smartphone comparisons. Just about every hot new phone out there goes for $200 with contract. Samsung, though, has broken the golden rule by introducing the Epic 4G at a towering $250. While that $50 margin is only a fraction of one month’s cell phone bill – some important context any buyer should consider – it could certainly tip odds in favor of the EVO 4G for customers teetering between the two phones.

Obviously, both phones offer 4G connectivity on Sprint, but we did find one distinguishing factor between them: their mobile hotspot capabilities. Both phones can act as Wi-Fi routers, sharing signal out to other devices, but the EVO 4G can dish it out to up to eight other devices, while the Epic 4G can handle five. Is this really a concern? Unless you plan to be the most popular guy in the coffee shop by offering Wi-Fi for everyone in the room off your phone, probably not. Few users will ever bump up against the maximum number of users in hotspot mode, and even if you do, eight people sharing the same wireless connection will work a lot like eight people sharing water from the same puddle with straws. That said, the EVO 4G still gets points for technical superiority here.

Better and better virtual keyboards and more sensitive touch screens have gone a long way in swaying fans of the physical keyboard, but some folks still crave the clack of keys. Samsung obliges with a full physical QWERTY keyboard that slides out horizontally, and it’s even backlit. While the 4.3-inch screen on the EVO 4G translates to one of the least cramped virtual keyboards out there, there’s simply no substitute for the real thing on the Epic 4G.

Despite a brilliant screen and a few extra horses from its 1GHz Hummingbird processor, the Epic 4G can’t overcome a number of bests still held by the first 4G phone on the market. It offers superior front and back cameras, a larger screen that remains usable in sunlight, a lower price, and even a few negligible differences like more room to share in Wi-Fi sharing mode. That’s not to even mention extras that go unaccounted for in the categories above, like its handy kickstand for watching video and HDMI output. That said, old-school mobile users who demand a full physical keyboard will find plenty to love in the slide-out model on the Epic 4G, and the dazzling OLED screen will catch plenty of compliments… indoors, anyway. Buyers who fall in love with either one of these compelling features may happily trade in the EVO’s handful of practical advantages for the Epic.

Check out our full reviews of the HTC EVO 4G and Samsung Epic 4G.

Also check out our other smartphone comparisons.

Video-editing app LumaFusion to get a Galaxy Tab S8 launch
Best Samsung Galaxy deals for October 2022
Best tablet deals for October 2022
The best iPhone games to play in October 2022: Lord of the Rings and more
Best Samsung Galaxy Tab deals for October 2022
Experts warn AI assistants are hurting the social development of children
Google gives Maps’ Immersive View a boost and adds a new vibe feature
What to expect from Google’s October 6 event: Pixel 7, Pixel Watch, and more
iPhone 14 Pro vs. iPhone 14 camera battle shows why small details matter
How to hide photos on your iPhone with iOS 16
Does the iPhone 14 have an always-on display? Know this before buying
Reverse wireless charging on the iPhone gets one step closer to reality
The OG App, an ad-free Instagram client, is no longer on the App Store