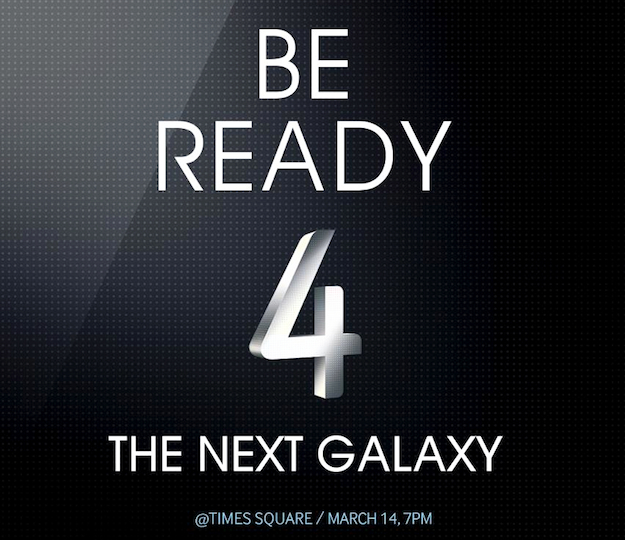 Mobile World Congress closed its doors yesterday, and although it was an exciting and tech-packed few days in Barcelona, Samsung has swept aside any residual excitement surrounding it by inviting us all to see the Galaxy S4’s release on March 14. We say all of us because unlike last year, the event will be held in a very public venue – Times Square in New York City – and it’ll be live streamed via YouTube for everyone to enjoy.

This is no cryptic invitation open to interpretation either, as it says, “Be ready 4 the next Galaxy,” in massive letters – and one significant number – leaving us with no doubt we’ll be seeing the much-rumored and highly anticipated Galaxy S4 smartphone. Just in case it hadn’t made it clear enough, in the small print it adds, “You can watch via live stream and experience Samsung’s new flagship smartphone at Times Square.” As usual, Samsung has branded this an Unpacked event, then added an “Episode 1” at the base of the invitation – making sure we know there are more major events to come this year.

Putting an end to the mystery

The Galaxy S4 has been the subject of much discussion and while the exact specification and its design remains a closely guarded secret, rumors point to the phone having a 4.99-inch touchscreen with a 1080p resolution and Samsung’s Exynos 5 Octa processor. On the subject of the processor, more recently, a rumor appeared which suggested Samsung would be using a quad-core Snapdragon 600 chip instead, so let’s not get our hopes up that the S4 will be the first eight-core smartphone.

We really don’t know anything about the S4‘s design, but one leaked image showed a similarly shaped phone without a home button. At one time, the use of the number 4 in the phone’s name was in doubt, however this now seems to be unlikely. Finally, the Galaxy S4 could be accompanied by the release of a smart watch, currently known by its codename of the Galaxy Altius.

Samsung will be announcing the Galaxy S4 less than a year into the Galaxy S3’s life, and presumably, the release will come either just before or close to the S3’s one-year anniversary. The timing of its announcement is bad news for HTC, as it has yet to set a final release date for the new HTC One – it’s rival device to the Galaxy S4 – but has said it won’t be on sale before March 15. We wonder how many people who planned to buy it will end up being swayed by the Galaxy S4?

We’ll meet the Galaxy S4 on March 14, when the Times Square event begins at 7pm.