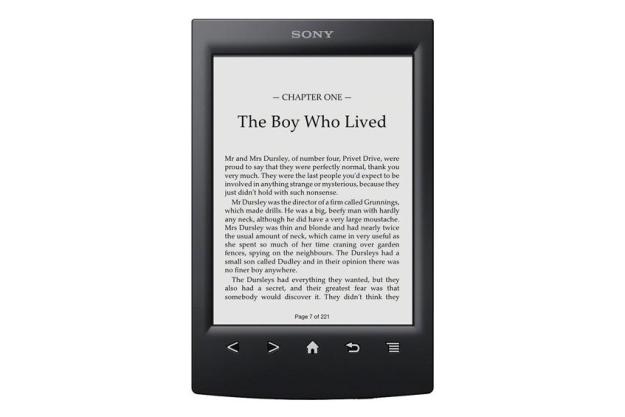 “It’s hard to recommend a product that costs more and offers less, but if you like physical buttons, don’t need a light-up screen, or want extra storage (microSD), Sony’s reader is a decent option.”

Sony has never been a major player in the e-book reader market. The Sony Reader line has kicked around for half a decade, but has never been able to catch up to industry leader Amazon. With the holiday season approaching, Sony’s decided to give the dedicated e-reader another go, this time with touch. Has it finally caught up to Amazon? Almost.

If the new Kindle Paperwhite weren’t around, Sony would finally be in a place to make up some ground with its new Reader. Unfortunately, time just isn’t on Sony’s side.

The Sony Reader follow’s the basic conventions you expect in a dedicated e-book reader these days. It has that monochrome, 6-inch E Ink screen, gets more than a month of battery life, and it’s tied almost exclusively to one book store – in this case, Sony’s.

The Reader comes in black, white, or red (we got the black unit for review). Sony has improved the design from last year. Instead of an ugly bar of buttons, it now has its five navigation buttons – Page Back, Page Forward, Home, Return, and Menu – cleanly separated and press-able as separate buttons. The result is a somewhat cleaner front. The rest of the Reader is covered with that grippy, rubbery coating that’s on many gadgets these days. It feels comfortable enough to hold and is noticeably lighter (164g) than the new Kindle Paperwhite (213g).

Like the Kindle, on the bottom of the Reader, you can find the Micro USB charging port and a power button for unlocking the device.

From an outward point of view, the only real deficiency (if you want to call it that) of the Reader is it has so many face buttons. On the new Kindle, Amazon has no navigation buttons at all, and Barnes & Noble has only retained a single button. In this way, the Reader feels a bit antiquated and overly complicated. But those who like actual buttons to turn the page and bring up menus will prefer Sony’s take.

To keep pace, Sony has added an infrared touchscreen, much like the ones on the last Kindle and Nook. Infrared touchscreens aren’t actually touchscreens in the way you might think. It’s more comparable to a laser field across the top of your e-reader screen. When your finger breaks the grid, then the alarm sounds and the screen registers a touch in that location. Because of this “grid” requirement, the bezel that surrounds the screen is a few extra millimeters taller than it used to be, though you may not have ever noticed if we hadn’t just told you.

What you will notice is the lack of a light. The Nook Simple Touch with Glowlight introduced a good front-lit screen earlier this year, and the Kindle Paperwhite just kicked it up a notch. Even Kobo is coming out with a light-up e-reader. Despite being $10 more than the Kindle Paperwhite, the Reader ($130) does not have any type of illumination built in. This means you cannot read in the dark unless you have your own light. If you’re okay with that, then ignore this paragraph. If you want more, then consider another e-reader.

Sony is boasting better refresh rates on the Reader, and it does get up to 15 or so page refreshes without a wipe (a quirk of E Ink screens that turns the entire screen black for a fraction of a second). This is better than the current Kindle (6 refreshes), but the Kindle has a leg up on speed and screen quality. The Reader still has a 600 x 800 pixel screen, but Amazon has pushed its resolution to 768 x 1024 pixels. What does this mean? Text and menus on the Kindle look a little bit smoother than they do on the Reader. Finally, we’ve also noticed that Sony’s screen sometimes fails to fully refresh, leaving a bit of a dirty film in the background – a faint reminder of the page you just read. It’s not a big problem, but it is noticeable.

Sony’s Reader interface is completely usable and adequate. Much of it is quite similar to your typical Nook or Kindle, with a home screen showing your book collection and a relatively easy to navigate Reader Store. When you’re in a book, a swipe to the left or right will change your page; a tap on the bottom will bring up a bar to quickly jump between chapters of a book; and a press of the menu button will bring up options to hand write notes on the page, highlight selections, change the font, and post updates to Facebook. (Though to get Facebook to work, we had to plug our Reader into our PC and download an update. There is a known bug with logging into .) Evernote access and the ability to borrow books from a local library are also included in the Reader and come in handy.

Confusingly, when you’re inside a book and try to jump to “Settings” you’re only taken to an “about” page for the book your in. This is a small example of some of the ways Sony’s interface could still be smoothed out and improved.

Overall, it’s easy enough to find, download, and read books on the Reader, but Sony seems to be slightly behind its major competitors, which have more robust touch interfaces.

We have asked Sony to provide some stats on the exact number of books in its library, but haven’t heard back just yet. However, it does appear that the Reader store does offer a competitive catalog of new and old bestsellers to satisfy most users. Unfortunately, Sony likely doesn’t have the number of exclusives that Amazon is able to muster for its Kindle, which has a library of 1.5 million books. The Nook has about 2.5 million. To determine if Sony’s Reader store is good for you, we recommend you hit the Web and search for your favorite books on the Sony Reader store, Nook, and Amazon websites. The big problem with all of these stores is that any books you buy will be locked with Digital Rights Management, or DRM. If you buy a Sony Book, you’ll never be able to use it if you don’t have a Sony App or device. If you have a Nook book, you’ll never be able to access it if you don’t have a Nook device or app. Sony has done a good job of supporting many devices with its app, but it’s a false sense of freedom. In all reality, if Sony shut down its store tomorrow, you could lose all of your books. No fun, right? Unfortunately, it’s the way e-books are right now.

(Note: Those who buy a black Sony Reader are eligible to get a free copy of Harry Potter and the Sorcerer’s Stone from Pottermore, the vendor of HP books.)

The Sony Reader has 2GB of onboard flash memory and about 1.3GB of that can be used to store books. However, since there is a microSD slot, you can buy a microSD card up to 32GB in size. This means you can hold well over 1,000 books, or more than most of you should own. The 6-inch screen has a resolution of 600 x 800 pixels, which was the standard size until the new Kindle Paperwhite bumped its resolution to 768 x 1024 pixels.

The Sony Reader supports the following formats: ePub, PDF, JPG, PNG, GIF, BMP, and TXT. You can sideload your own files if you’re willing to learn how to do it.

Finally, the Reader is a Wi-Fi only device. It does not have a 3G connection to download books, like some Kindles.

Like all dedicated e-book readers, the Sony Reader gets unbelievable battery life. Sony claims that a single charge will power the Reader for eight weeks straight if you turn the Wi-Fi off and read for about a half hour per day. If you keep the wireless on, the battery will last 6 weeks. It takes about two or three hours to fully charge the Reader from your PC or the wall.

To us, anything that lasts more than the 10 hours most phones and tablets do is impressive. The only problem with a battery that lasts two months is that it’s so efficient that you may forget that you need to charge it at all.

The Sony Reader is a fine device. If you’re already invested in Sony’s Reader store, you’ll find a good device here to read on. The only problem with it is that Sony’s competition has jumped ahead. Both the newest Nook and Kindle offer light-up screens for night reading and smoother touch controls; they rely less on physical buttons, another small way the Reader is slightly behind the times. And even these issues wouldn’t be a problem if Sony would price the Reader more competitively. It currently costs $130. By comparison, both the Nook Paperwhite and Nook Simple Touch with Glowlight cost $120. It’s hard to recommend a product that costs more and offers less, but if you like physical buttons, don’t need a light-up screen, or want extra storage (microSD), Sony’s reader is a decent option.

Topics
Video-editing app LumaFusion to get a Galaxy Tab S8 launch
Samsung Galaxy S23: release date, specs, price, rumors, and news
The best QR code scanning apps for iPhone and Android in 2023
The best iPad keyboards for 2023
The best USB-C headphone adapters for 2023
Yes, we really are completely spoiling the OnePlus 11 and Buds Pro 2 launch
The best rugged smartphones for 2023
The best iPhone games in 2023: 31 games you need to play right now
This Apple leaker just revealed tons of changes for iOS 17 and iPhone 15
Beats Studio 3 headphones are $120 off today at Amazon
How to cheat in Words With Friends
Trading in your iPhone with Apple? You’ll get less than yesterday
3 reasons you should buy the Google Pixel Watch today