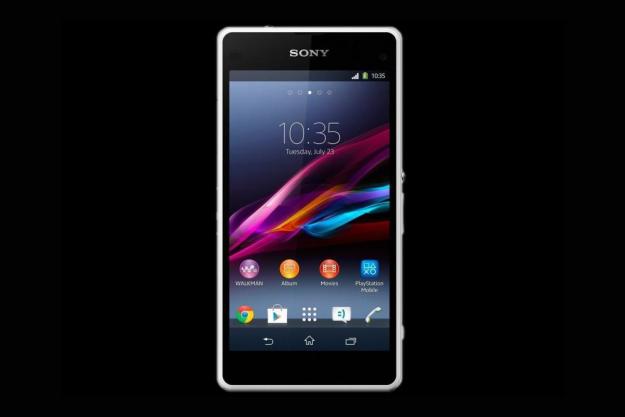 “Sony has nailed a market segment that needs some love. The Z1 Compact is the best small smartphone running Android.”

It’s refreshing to see a smartphone manufacturer produce a smaller smartphone without feeling the need to scrimp on the specs. Sony’s Xperia Z1 Compact retains the majority of its bigger sibling’s cutting edge hardware, but fits comfortably in the hand. Unlike the Galaxy S4 Mini, this is no disappointing mid-ranger. With the typical Android flagship touch screen creeping beyond the 5-inch mark, the Z1 Compact is bound to tempt anyone seeking a more manageable sized phone.

Instantly recognizable as a member of the Xperia family, the Z1 Compact is another black slab with glass front and back, set in an aluminum frame. Silver highlights mark the headphone port on the top, the signature Sony power button halfway down the right spine, and the camera lens on the back. There’s also a volume rocker and a small, dedicated camera button on the right.

Sony’s Xperia Z1 Compact retains the majority of its bigger sibling’s cutting edge hardware, but fits comfortably in the hand.

The single speaker grill is found on the bottom edge of the phone. On the left are flaps to conceal the SIM card slot, MicroSD card slot, and the Micro USB port. There’s also a magnetic charging port in the middle, which lets you to stick the phone in a dock and charge it without having to fiddle with a flap each time. The flaps are there because this is a waterproof and dustproof phone with an IP55/IP58 rating which means it can be submerged up to 1.5m for 30 minutes and survive low pressure jet sprays (think spilled drinks).

The Compact is obviously much smaller than it’s brethren at 5.0 x 2.56 inches, but it’s the chubbiest of the bunch at 0.37 inches (9.5mm) thick. It feels heavy in the hand and even a little cold when it hasn’t been busy, but it’s small enough to hold and operate one-handed. The rounded corners and smaller size ensure that it doesn’t feel too angular and sharp, like the much larger Z2 can.

The weight is actually 4.83oz (137g) and you get a sense of how heavy that is when you consider that the much larger Galaxy S5 weighs in at 5.11oz (145g). The premium build quality is obvious, but you can’t help wonder if Sony could have shaved a little more off those bezels, particularly top and bottom.

One feature we really like on Sony’s smartphones is that the notification light is tucked away behind the earpiece. It’s one less detail to spoil that minimalist front.

You get a screen protector in the box with the Z1 Compact, but apparently it is the last in the Xperia line to ship with a protective anti-shatter film (ASF) pre-applied. The glass front and back attract fingerprints and smudge easily and you’ll find that the ASF also scratches more easily than the glass underneath.

Minor complaints aside, Sony’s premium design works very well scaled down, and this is a good-looking phone.

The Xperia Z1 Compact ships with Android 4.3 Jelly Bean, but the Android 4.4.2 KitKat update has been rolling out since March. On top of Android, you’ll find Sony’s customized user interface (UI). At first glance you might think it’s not far from stock Android, but the more you dig, the more apparent Sony’s touch is.

There’s nothing really exciting in Sony’s UI, but it works well and doesn’t go overboard.

Pull down the notification shade and you’ll find two tabs. The default tab provides an uninterrupted view of all your incoming messages and updates. Sony has shifted the Quick settings icons onto a second tab that you can edit to include exactly what you want. It does introduce one extra tap to switching Wi-Fi or NFC on or off, but it’s worth it for the uncluttered notifications feed.

As a company with an entertainment division, you won’t be surprised to find Sony pushing its own video and music services.

Google’s apps are all present and correct, and Sony’s bloatware certainly doesn’t match Samsung’s offerings. The Chrome browser has scored default status and there’s no duplication of Google Now, though it doesn’t have such a prominent place in Sony’s UI.

Apart from several extra entries in the Settings menus, you can also see Sony’s influence in the app drawer where a swipe from the left will bring in a filter, search, and quick Uninstall menu that’s pretty handy. Tap the multitasking button and you’ll find Sony’s Small Apps at the bottom, which lets you open floating apps like a calculator or a notepad on top of whatever else you are doing.

There’s nothing really exciting in Sony’s UI, but it works well and it pulls together a few handy features without going overboard. It’s fast to navigate and relatively accessible.

Just because you want a smaller smartphone doesn’t necessarily mean that you want to dial back the specs. The Z1 Compact has the same 2.2GHz quad-core Qualcomm Snapdragon 800 processor, 2GB of RAM, and Adreno 330 GPU as the Xperia Z1S and the Z Ultra. It is fast, snappy, and capable of jumping in and out of apps without any perceptible lag or stutter.

The display is 4.3-inches and, while it includes Sony’s X-Reality engine and Triluminos technology, the resolution has been dropped to 1280 x 720 pixels. If you’re concerned that it’s not full 1080p, you needn’t be. That resolution still works out at 342 pixels per inch, which makes the pixel density higher than the iPhone 5S, which sits at 326 ppi.

You should find that the display is bright and sharp, but if it looks a little on the warm side for you then you can always tweak the white balance. Complaints about the viewing angles on older models have obviously been addressed and you can still read text quite easily on the Z1 Compact, even at an angle.

Internal storage is 16GB, with around 12GB free out of the box, and you can expand that by up to 64GB via the MicroSD card slot.

The main camera is an impressive 20.7-megapixel shooter, which we’ll get to in more detail in a moment. There’s also a 2-megapixel front-facing camera. All the latest connectivity is there including 4G LTE, Bluetooth 4.0 with A2DP, NFC, Wi-Fi 802.11 a/b/g/n/ac, and Wi-Fi Direct. If you plug in the earphones provided you can also fire up the FM radio app.

We put the Z1 Compact through its paces with our usual benchmark tests and it scored a very respectable 18,385 on Quadrant and managed a score of 19,116 on the 3DMark Ice Storm Unlimited Test. That’s better than the Xperia Z2 managed and it’s competitive with the best phones on the market.

No scrimping on the camera

The main camera in the Xperia Z1 Compact is rated at 20.7-megapixels, and it’s a good all-round performer. Sony’s camera interface is nice and clear because there’s text explaining each setting. The options are a mixture of genuinely useful and pretty gimmicky. The dedicated camera button is a really welcome inclusion and it enables you to go from having the phone off to taking a photo in a couple of seconds, really boosting your chances of capturing that moment before it’s gone.

The main camera in the Xperia Z1 Compact is rated at 20.7-megapixels and it’s a good all-round performer.

Most people will be content to let the Superior Auto mode do its thing and automatically choose the right settings for your environment, although it’s a shame that the Z1 Compact lacks the Z2’s Background defocus mode, which is great for macro shots. We found the Z1 Compact’s camera wasn’t always great at auto-selecting modes when we tried to take extreme close-ups. It’s also important to note that the automatic mode works at 8-megapixels and you’ll need to dip into the manual mode to advantage of the extra 12-megapixels.

The AR mode is clearly a gimmick, but it will give your kids a laugh. The Timeshift burst is ideal for catching those laughs, as it allows you to capture a burst of shots and easily slide through them to pick the best one. There is also the Creative effect mode which lets you pre-apply filters, Info-Eye which offers extra information about whatever is in your viewfinder (if it can recognize it), a Sweep Panorama option, and Social live which allows you to broadcast a live feed to your Facebook account.

Unsurprisingly the camera is great at capturing stunning shots in good conditions outdoors, but you’ll see noise creeping in when you’re indoors and the lighting starts to fail. The flash is aggressive, but the Xperia Z1 Compact still performs well in low light conditions compared to most of the competition, so you won’t always need it.

At 2 megapixels, the front-facing camera is just for quick selfies and video calls.

It works well as a phone, too

Voices come through loud and clear on the Z1 Compact and callers reported the same on the other end. The phone doesn’t seem to have any trouble establishing and maintaining a signal and it deals with switches between 3G and 4G graciously. We have no complaints about data speeds.

The battery Stamina to keep on running

The battery in the Z1 Compact is rated at 2,300mAh and is non-removable. For a phone this size that’s plenty of power and you’ll find on average usage, with a steady stream of email, texts, and a few calls, an hour or so of Web browsing, an hour of video or gaming, and a few photos a day it should last 48 hours. With light usage you’ll squeeze even more than that out of it.

Sony also offers a number of power management modes, such as Stamina mode, which cuts certain features in order to prolong your battery life.

There’s no getting around the fact that the Micro USB port cover is slightly annoying, so you might want to check out the magnetic charging docks on the market. Sony’s official accessory is around $50, but you can get a third-party one for a lot less.

Apple has long argued the merits of its perfect-sized iPhone that you can comfortably hold and use without requiring two hands. If you buy into that, then the Xperia Z1 Compact is easily your best option on the Android platform right now. Sony is the first manufacturer to understand that people don’t want a mini mid-ranger that only shares a name with the latest flagship; they want as many of the same cutting edge specs packed into a smaller phone as they can get.

Unfortunately, the Z1 Compact hasn’t been released in the U.S. and we don’t know which, if any carriers will pick it up, though T-Mobile is the most likely because it offered the Z1S. If you were to venture online and order a Z1 Compact, you’ll spend around $500. As the best small Android phone available right now, we think it’s worth it.

Topics
Video-editing app LumaFusion to get a Galaxy Tab S8 launch
The Nothing Phone is finally coming to the U.S., and I can’t wait
OnePlus 11’s controversial design returns in new ‘official’ renders
Samsung Galaxy S23: release date, specs, price, and all other rumors
This ridiculous smartwatch has a hidden pair of earbuds inside
Update your Google Pixel 7 now for three big security and audio features
Today’s best deals: TVs, laptops, iPads, robot vacuums and more
Google Pixel 7a: release date, price, specs, and all other rumors
It’s 2022, and customizing my iPhone is still horrible
Best over-the-counter hearing aids for 2022
Save $70 on the Fitbit Versa 4 when you buy it today
My favorite phone of 2022 didn’t come out this year — it’s from 2021
Twitter’s downfall made me look for alternatives, but they just made it worse