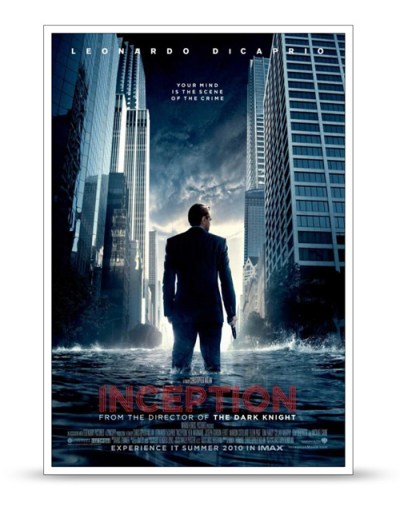 If you have any plans on seeing Christopher Nolan’s mind-bending new movie, you should do so quickly, because this is sure to be the type of movie that has people standing around the metaphorical water cooler and discussing it- especially the ending.

Let me start out by saying that Inception is one of the best movies I have seen this year, and ranks among the best movies I have seen over the last few years. Don’t be fooled by the fact that I am a tech guy with deep sci-fi leanings which might make you think that I would be predisposed to liking this movie anyway. Nolan’s sci-fi slanted, trippy, mind-blowing film is certain to be the type of movie that won’t be easily defined, and will appeal to fans of any genre. Years from now, video stores (assuming there are any video stores left years from now) will likely have to think long and hard about whether to label this movie as sci-fi, action, or even drama before assigning it a place on the shelves. It is a movie that defies easy analysis, but still manages to entertain.

Inception is Nolan’s reward for the success of the Batman films. Without the critical and commercial success of his previous blockbusters, it is hard to imagine a studio shelling out the kind of money that Warner Bros. handed over to Nolan for what is essentially a passion project- roughly $160 million. By comparison, 2008’s The Dark Knight cost $185 million and it was a tested franchise with massive buzz even before the script was finished. Inception is a different kind of animal.

It must have been an interesting pitch to Warner Bros. studio heads. Nolan likely went in and said something along the lines of “I have this idea. It’s a movie about a group that can go into dreams and steal ideas, but the subject can fight back and destroy the dream world. Oh, and I need around a $150 million.“ Once the puzzled looks and taunting laughs subsided, someone probably reminded them that Nolan had just grossed over $1 billion with The Dark Knight, and that was that.

With Inception, Nolan did exactly what he intended, received the exact performances from some of this generations best actors and actresses, and created a movie that will likely generate Oscar buzz. Not everyone will agree, and some people are likely to seriously hate parts of this movie, but those voices are likely to disappear beneath the avalanche of well deserved praise that Inception is likely to garner.

As to what Inception is all about, this review will be spoiler free, but if you want to be completely in the dark about the story, you might want to stop reading here and skip down two paragraphs. In some ways, it is very much like The Matrix– not so much in the story (although there are a few similarities), just in the sense that to explain the world of Inception robs a bit of the fun from the movie, and undermines the deliberately vague nature of the trailers that have managed to walk the thin line between giving away too much, and still being appealing. Most people going into the movie have only a vague idea about what they are about to see, so if you wish your eyes to remain completely virgin, scroll down past the next two paragraphs.

At its heart, behind the fancy sets and the insane worlds, Inception is a heist movie. Or at least, that is the driving force behind the plot. Leonardo DiCaprio (Titanic, Shutter Island) plays Cobb, the Extractor, a man who enters other people’s dreams to steal their secrets. Cobb is hired to steal the secrets of Saito, played by Ken Watanabe (The Last Samurai, Letters From Iwo Jima) , a businessman that turns the tables on Cobb, and then hires him for never-done-before job of  inception- the planting of an idea in a subject’s mind. Cobb accepts the job based on a promise from Saito, who tells him that he is able to make a murder charge against Cobb disappear so he can return to his family.

Cobb then sets out to form his team that consists of Joseph Gordon-Levitt (500 Days of Summer, GI Joe) as Arthur, the point man, Ellen Page (Juno, Smart People) as Ariadne, the architect, Tom Hardy (Star Trek: Nemesis, the upcoming Mad Max: Fury Road) as Eames, the forger, and Dileep Rao (Avatar, Drag Me To Hell) as Yusuf, the chemist. Together the group is tasked with implanting an idea in the mind of Robert Fischer, Jr., played by Cillian Murphy (28 Days Later, Sunshine), the son of an energy baron, and Saito’s main rival. The story takes an unexpected turn, when Cobb’s wife Mal, played by Marion Cotillard (La Vie En Rose, Public Enemies), continues to haunt Cobb’s dreams.

Ok, everyone back with me now? Good. It will be somewhat shocking if Inception is not nominated for several technical awards, including best special effects. There might be movies coming later this year that will be comparable, but it is hard to imagine anything surpassing the visual masterpiece that Nolan presents. Each scene seems to top the last, and people will probably be talking about Gordon-Leavitt’s zero-g fight for a while to come.

Another Oscar nod is likely to come in the form of best original screenplay. Hollywood isn’t exactly known for taking huge risks, as most of the biggest budgets go to sequels and adaptations of existing properties. If nothing else, Inception is remarkable for the fact that it is incredibly original. Everything on the screen is unique. If you are a fan of movies in general, you owe it to yourself to watch Inception for that simple fact alone. Even people that end up hating this movie will likely applaud its originality.  The movie succeeds on so many levels that it would be nice- albeit somewhat naive- to think that studios and other filmmakers might see the benefits of green lighting more movies like this that are based on original ideas.

That doesn’t mean that this movie is perfect. As much as it pains me to say, there are a few flaws in Nolan’s diamond. The ending is likely to split some people. It makes you think and question what you have just seen, which some people will love, and others hate. For the record, I absolutely loved it, but it is possible that others won’t. The biggest problem, however, comes from the character of Cobb’s wife, Mal.

Without spoiling anything, which is difficult because the truth about her character becomes a vital piece of the plot as well as the character of Cobb, the character of Mal is based upon the emotions she is intended to illicit. She is designed to  help you relate and connect to the character of Cobb, but her scenes are few and far between, and she is little more than a plot device at times. In some parts, this is deliberate, but in the instances that the audience are meant to connect to her- and by proxy to Cobb- it just falls a bit flat.

If Nolan has a flaw in his work, it is his representation of women in movies. In both Batman films, the character of Rachel Dawes, whether she was played by Katie Holmes or Maggie Gyllenhaal, could almost have been entirely removed from the films and neither movie would have suffered- not counting the plot elements the character effects. Two-Face would not have been possible without the character of Dawes, but beyond that there isn’t much to her. It is the same in The Prestige, where the women are all used to further the plot and add to the surprise ending, and I will give a dollar to anyone who can remember anything that Hillary Swank did in Insomnia. Even in Momento, Carrie-Anne Moss is only there to support the story. The talented Ellen Page also seems to be in Inception more to help the audience by asking questions of Cobb, than to stand on her own. You never really understand her reasons or motivations, and beyond her interaction with Cobb, she has very little to do with the movie.

But that is all nitpicking, something that is easy to do with Inception simply because it is the type of movie that will stick with you for quite awhile and make you think. Odds are, a good deal of the business for this movie will come from repeat viewings. I am already thinking about when I can go again.

This is the movie Nolan wanted to make, and yet again, he proves why he is one of the most respected filmmakers working today. It might be a bit of a long shot, but there is a very real chance that Nolan will receive an Oscar-nomination for the best director, and he could even win. He deserves it. Overall, Inception is HIGHLY recommended.

Almost everything. The visuals, the acting, the direction, and the incredible originality. The technical side is also stellar, from the music, to the sound effects. The ending that will have some people raving.

Some under developed characters, especially with the women. The plot sometimes gives way to the visuals. The ending that will have some people screaming.