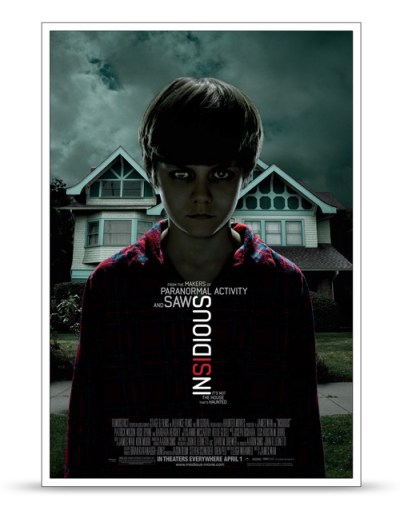 Insidious is as modern a horror movie as they come. Directed by James Wan (Saw, Death Sentence) and written by Leigh Whannell, the duo behind the original Saw, the film is the perfect progression into the outlandish places horror movies will begin going in the years to come. It’s part Paranormal Activity, part Ring, and has the ridiculous rules of the Saw series. Oh, and it’s absolutely full of shocker shots, which start out slow, but are soon so plentiful they have more in common with a strobe light than anything else. It does have three things going for it, however: no one runs around with a shaky hand-cam, there’s not a lot of gore, and despite its lack of coherence it’s a fun popcorn flick.

We never expect shock horror films to have much in the way of plot or character development, and there are no surprising characters here. Rose Byrne (Get Him to the Greek, Knowing) stars as Renai Lambert, a mom who loves her kids but keeps leaving them in rooms out of sight. Patrick Wilson (The A-Team, Watchmen) is Josh Lambert, her somewhat vain husband who thinks his wife may be crazy even after he witnesses ludicrously mortifying ghost attacks himself. The plot revolves around their oldest son, Dalton (Ty Simpkins).

Dalton is what you’d call a gifted boy. Soon after the Lamberts move into a creepy new home–complete with a menacing furnace locked in an ancient attic–he takes a tumble and falls into a coma. Doctors can’t explain why the boy won’t wake up. There doesn’t appear to be any head trauma. Then the fun starts.

Before long, Renai begins seeing strange figures out the window; doors start opening and closing on their own; bloody hand prints start appearing under Dalton’s body; you know, the usual.

At first, Renai is the only one seeing the ghosts, which mostly terrorize her remaining kids, and Josh thinks she’s crazy (see above). Then Josh encounters the evil haunting on his own, but still doesn’t seem to believe it. While having a doubter in the cast seems to be a requirement in films like these, Josh is especially annoying as he refuses to contact anyone about the problem and makes Renai believe she’s crazy. This is despite the fact that he encounters several horrifying ghosts. If you’re front door kept flying open due to an intruder you chase around but can’t find all night, would you keep living there? Josh seems to have scene-specific amnesia.

Elise Rainier (Lin Shaye) joins us as things heat up. Rainier is a psychic who can see dead people. She’s accompanied by two sidekicks who entertain us with their bickering, but something about her commands respect. As the plot dissolves into madness, and ghouls begin popping out of the woodwork (literally), Lin Shaye remains a solid crutch for the film. A good performance will get you far.

Ghosts with the most

Usually in movies like this, ghostly terrors will stop if two people are in a room at the same time. Not Insidious. These ghosts are bold and they are here to party. They come in all varieties too. There’s a murderous bride, a Dracula, a little kid, twin girls, and more. What they all want and why they’re here is anybody’s guess.

Leading the villainous pack of ghouls is a demon with a red and black face that looks a lot like Darth Maul from Star Wars The Phantom Menace. This guy is not nice. His eyes are green and catlike and he has a tongue long enough to make Gene Simmons jealous. I can’t forget his four legs, hooves, and metal claws that he sharpens like Freddy Krueger. Worse, he lives in a hellish abode complete with red lights, candles, ornate draperies, and gargoyle statues. Do all demons shop from the same catalog?

By the time Insidious reaches its climax, you’ll either be exhausted, laughing, or both. Several times, Director Wan makes the mistake of showing too much for too long. While ghosts are scary when you combine them with quick camera cuts and ominous, moaning music, Wan ventures from shocking into the ‘further’ realm of silliness.

Still, despite the laughs, I couldn’t help but have a good time when I saw it on the big screen. Everybody seemed to laugh and have fun with it all.

If you don’t have time to see it, don’t worry. Insidious isn’t a one-time ordeal. Much like Final Destination, the film lays out specific ground rules about demons, ghouls, a process called Astral Projection, and a place called The Further. Learning all the ground rules is exhausting and comical, but knowing them will undoubtedly come into use when the sequel rolls around next Spring. Wan and Whannell are no longer the innovators they were when they came up with Saw seven years ago, but they do know how to set up a recurring film formula better than most. What Insidious lacks in originality, it certainly makes up for in business acumen.

What’s new on Amazon Prime Video in October 2022
Don’t Worry Darling’s ending explained
Andor has a chance to make Star Wars feel fresh one more time
The 105 best shows on Hulu right now (September 2022)
The best TV shows on Amazon Prime right now (September 2022)
The best scary podcasts to keep you up all night
The best new shows to stream on Netflix, Hulu, HBO, and more
Pluto TV gives 60 Minutes its own dedicated channel
All Jacked Up and Full of Worms trailer is creepy and weird
The 80 best movies on Hulu right now (September 2022)
Heardle today, September 24: Answer, hints and help for song of the day (Saturday)
Framed today, September 24: Answer and hints for the movie of the day (Saturday)
James Cameron’s sci-fi epic Avatar returns to theaters, but has its magic faded?