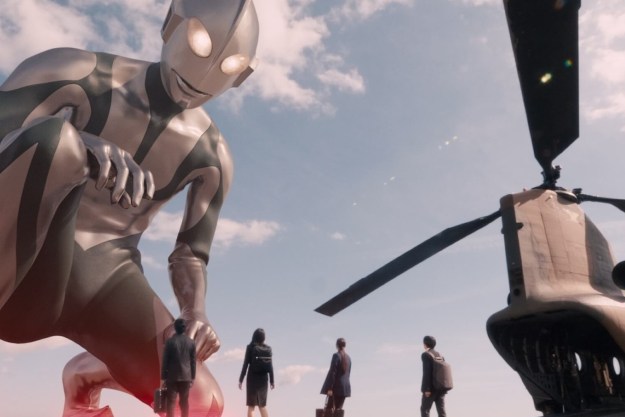 Audiences outside of Japan might not comprehend how big of a deal Shin Ultraman is, but for those in the know, the big-screen reboot of the titular cosmic hero’s adventures from Shin Godzilla filmmakers Shinji Higuchi and Hideaki Anno is a truly massive cinematic event.

A modern revival of the Ultraman franchise, Shin Ultraman offers a new chapter in the adventures of a gigantic extraterrestrial hero who has defended Earth from all manner of monstrous threats across hundreds of television series, films, games, books, and other spinoff projects spanning more than five decades. It’s also Higuchi and Anno’s second revival of an iconic tokusatsu (the Japanese genre of live-action films and shows that use extensive, practical effects) character after the pair successfully blended modern filmmaking techniques and classic aesthetics in 2016’s acclaimed Shin Godzilla.

Directed by Higuchi and written and co-produced by Anno, Shin Ultraman casts Takumi Saitoh as Shinji Kaminaga, an agent with the Japanese government’s special task force created to deal with kaiju, the gigantic monsters terrorizing the island nation. During one particularly dire encounter with an energy-absorbing kaiju, Kaminaga is accidentally killed when a new, towering extraterrestrial entity arrives on Earth to protect humanity. The entity, deemed “Ultraman” by the government, then takes on Kaminaga’s human form in order to hide among Earth’s inhabitants, only to find itself at the center of a new, escalating series of threats to the world.

For those familiar with the adventures of Ultraman in some (or all) of its of incarnations — particularly the original series that premiered in 1966 — Shin Ultraman is a wonderfully familiar return to the character’s signature blend of sci-fi silliness, overly earnest drama, and wild brawls with rubbery monsters amid sprawling, miniature landscapes. From the abundance of expository (and both intentionally and unintentionally humorous) dialogue, to the comically exaggerated posing and purposefully low-tech effects, Shin Ultraman is a love letter to much of what made Ultraman fun for generations of fans who grew up with the character’s seemingly endless adventures.

The extent to which Higuchi and Anno have replicated that early Ultraman viewing experience is impressive, particularly given how easy it would have been to fall back on modern digital techniques to craft something that has the retro look of the original shows and films without all of the painstaking, physical artistry that goes into creating tokusatsu films’ practical effects. While Shin Ultraman does make some creative use of motion-capture performance and digital character attributes, the film never suffers from the sort of anachronistic dissonance that can develop when modern techniques are used to replicate old-school effects. Shin Ultraman revels in its retro aesthetic, and its filmmakers’ appreciation for the visual style of the genre fills every scene.

Echoes from the past

That desire to replicate the feel of early Ultraman adventures extends to the film’s score, too.

Shin Ultraman reunites Higuchi and Anno with composer Shirō Sagisu, who created the score for Shin Godzilla by blending classic and modern musical elements from Japanese cinema into a powerful homage to the scores that contributed so much to early tokusatsu projects. Sagisu reportedly included some unused songs created for Shin Godzilla and popular anime series Neon Genesis Evangelion, which makes sense, given the similar balance those projects strike with over-the-top fantasy and quieter, more contemplative moments. Sagisu also incorporated musical elements from composer Kunio Miyauchi’s work on the original series, which only adds to the sense of kinship Shin Ultraman has with the older iterations of the character’s adventures.

Even while paying homage to the past, however, Higuchi does manage to pepper Shin Ultraman with some creative, signature elements of his own filmmaking style.

Like Shin Godzilla, the film pinballs between more conventional shot-framing and scenes that unfold while the camera’s lens is partially obscured by someone’s head or furniture, or shot entirely from the ground up. It’s a technique that prevents the viewer from getting too comfortable spectating on the events unfolding in Shin Ultraman, and it waffles between feeling like a bold, brilliant approach and a frustrating distraction. On one hand, it keeps you attentive and present as a viewer trying to understand what’s happening in a scene, but it’s easy to become annoyed by the forced, obstructed view you’re getting at other points.

And Higuchi doesn’t shy away from inventive camera tricks to bring other important scenes to life. One memorable sequence in the film has Ultraman desperately fleeing a cosmic threat, and much of the scene is shot head-on with a miniature, prone model of the character that’s shakily maneuvered around the frame of the shot, as well as toward and away from the camera, to suggest the tremendous force Ultraman is fighting against in his flight. It’s a silly, overtly low-tech method of depicting the action unfolding in the story, but it fits perfectly within the film’s overall aesthetic.

Although audiences need not be well-versed in Ultraman lore to have a positive experience with Shin Ultraman, an appreciation for the conventions of the tokusatsu genre will likely be helpful in understanding why the film is so deliberate in its old-school approach to storytelling. Rather than drag Ultraman into Hollywood, Shin Ultraman keeps the character firmly rooted in the environment that made him popular to begin with, while using modern filmmaking techniques to streamline certain aspects of production and polish up the final product.

Anyone with a fondness for tokusatsu cinema — from classic Ultraman and Godzilla films to more modern variations, like the Mighty Morphin Power Rangers series inspired by Japan’s Super Sentai shows — will enter Shin Ultraman with a level of comfort that plays well with all of the surreal action and charmingly overacted drama that unfolds on the screen. Those who enter it blind, though, might have a more difficult time getting swept away in everything Shin Ultraman does so amazingly well.

Modern filmmaking techniques and technology give filmmakers a lot of power to tell fantastic stories, but Shin Ultraman is a great reminder that, in the right hands, a deep and genuine love and appreciation for the source material goes a long way, too.

Directed by Shinji Higuchi, Shin Ultraman is currently in limited theatrical release in the U.S., and will be available via on-demand video later this year.