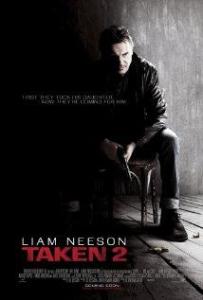 Have you ever watched an action movie and thought to yourself, “you know, I like the action, but what it really needs is about 20 times more camera angles so I’m not entirely certain what I just saw — that would be great.” If so, then you are in luck! If, however, like the vast majority of functioning humans, you actually like to see the things you are looking at, Taken 2 might not be the film for you.

Taken 2 is a shallow, kinetic mess of visual trickery that never, ever stops, even when it should. Like a twitchy kid with ADD and an alarming coffee addiction, Director Olivier Megaton can’t seem to keep his hands off a single shot.

At several points in the film I actually began to count to see how long before the movie cut to a different shot. The longest I made it to was five seconds. Even in what should be the slow shots, innocuous moments, like when characters are walking into a hotel lobby, it’s almost as if the film is vibrating, and simply cannot slow down. Long shots, close-ups, side views, overhead shots – there are no lack of camera angles in this movie. It is filmmaking trickery, and it can work to make things feel more frantic, but only in moderation. And if there is one thing Megaton seems unable to grasp, it is moderation.

You can’t really blame him though. With a badass name like Megaton, you really don’t have many options as a director other than action movies. And with a filmography that includes The Transporter 3, Colombiana, and Hitman, it would seem he agrees.

When this style works, it is fine. In a foot chase, using the unrelenting cuts actually makes it feel a bit more frantic. In a fist fight or a car chase though, it feels like you are missing some of the movie.

There is never a second where you can just enjoy the action. Some of the best action moments are actually lost in a strobe light-like series of cuts. To give you a better example, at one point during a fist fight a character pulls a knife, but the camera never cuts back far enough, or lingers long enough, to identify who it is holding the knife. A long shot eventually reveals it, but that is just muddy filmmaking.

All of the sins of the quick cuts can be forgotten – or at least tolerated – if the story is good. Shame that Taken 2 barely has one.

The sequel is a direct continuation of the original Taken, as opposed to another adventure in the life of Bryan Mills (Neeson). A few years have passed since Mills murdered his way through Paris in order to rescue his daughter Kim (Maggie Grace), who was taken by an Albanian human trafficking gang and sold as a sex slave.

Mills is still at it, but following the breakup of his ex-wife Lenore (Famke Janssen) and her husband, he invites his family to join him in Istanbul for a getaway. Unbeknownst to them, Murad Hoxha (played by Rade Šerbedžija), the father of the Albanian gangster that took Kim and was subsequently killed in a fairly brutal fashion, awaits them for a round of revenge.

To its credit, Taken 2 avoids the tired, clichéd sequel staples of having an extraordinary person thrust into an unbelievable situation yet again, and instead tailors the script to be based on the consequences of Mills’ actions. It makes sense in the narrative, and it allows the film to massively simplify the entire plot.

This isn’t a bad tactic for action movies. Most adrenaline fueled films aren’t well served by getting lost in heavy drama, but the risk is that you need to do a very good job with developing the minimalist script or it feels hollow. You don’t need a massive backstory on the villain, but you do need to care at least a little, otherwise the resolution is anti-climactic. And that is a problem with this film.

The antagonist is just sort of there. Šerbedžija is given nothing to build a memorable character around, beyond the idea that he apparently loved his son, a guy that was so despicable he sold young girls into a life of perpetual rape. You are just supposed to sort of buy his justification, and beyond his identity as a father, you never learn a single thing about this character to make him stand out. There is nothing interesting about him, and the possible complexity the character could offer is totally absent.

The same is mostly true of Mills’ family as well. Smith and Janssen both do well with what they are given, but neither are working with much to begin with. Of all the characters, the one with the most potential to be explored is Kim. But instead of wasting time on silly little things like story, the movie flies by the emotional toll of the last film, the traumatic effects reliving it would have, and instead she is swept up in the events and becomes a narrative tool rather than a character.

That is endemic of the film as a whole, and highlights the problems with Taken 2: it is just an action movie, and a fairly lazy and generic one at that. There is even a point in the final act where the comes together so quickly, and through such an unlikely series of events that it feels like the film has long since given up on a narrative.

The original Taken had a story to tell and a unique way to do it. The shocking and gritty world of human trafficking was juxtaposed against the beauty and light of Paris, and the story was able to ratchet up the tension as an unpredictable protagonist quickly went from hero to antihero, yet managed to retain the sympathy of a father desperately seeking his daughter. None of that depth is present in Taken 2 on any level.

Taken 2 is an exceedingly generic film with no real meat to it, and it is badly shot on top of that. The three main stars, Neeson, Janssen, and Smith are all fine in their roles, but they are given next to nothing to work with. That puts the burden on the action, which Megaton takes in a bizarre direction that feels like you are watching a movie made of caffeine.

With even a tiny bit more attention to the character development, and a few Valiums for Megaton, Taken 2 might have been worthy successor to the original. Instead it comes off as a pale impersonation.